Breathing plays a vital role for all swimmers and triathletes looking to improve their speed and efficiency. Get it right and you’ll swim faster more easily. Get it wrong and you’ll add time and fatigue.

The key to improving the breath cycle lies in timing your exhalation and inhalation to coincide with the correct head and body movement. This may sound complicated but it’s not. Knowing when and where to take air on board and a little practice is all that’s required to improve.

How do I stop feeling out of breath when swimming front crawl?

Like all new skills, it’s best to build your co-ordination and confidence by starting slowly. Every breath should be consistent in timing and movement. It’s important to realise how breathing fits into the stroke cycle without disrupting your body position in the water or your arm movement. Any extra movement caused by breathing has a drastic effect on balance, propulsion and drag.

Which pattern works best is very much down to the individual. It’s probably best to learn to breathe on every stroke so you can develop a natural rhythm and timing to the process. From then on, the decision to breathe bilaterally (on both sides) should be taken on how well you balance your stroke while breathing.

Pay particular attention to body alignment and position as they’re important when breathing. Between breaths your face should be looking straight down so you remain balanced. Make sure you keep your hips high and on the surface.

Ensure your hips and legs don’t swing from side to side. There are two reasons that might cause them to swing. Firstly, you may be turning your head too far when you breathe. Secondly, you might be trying to remain flat in the water when what you should be doing is rotating.

When you take a breath you should rotate your torso and hips together to an angle of 45º maximum. The easiest way to understand this is to imagine there’s a rod running down through the middle of your body and you’re rotating around this central axis as you breathe. 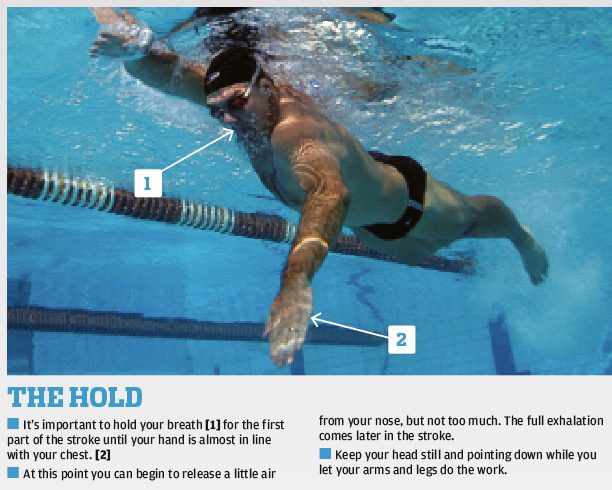 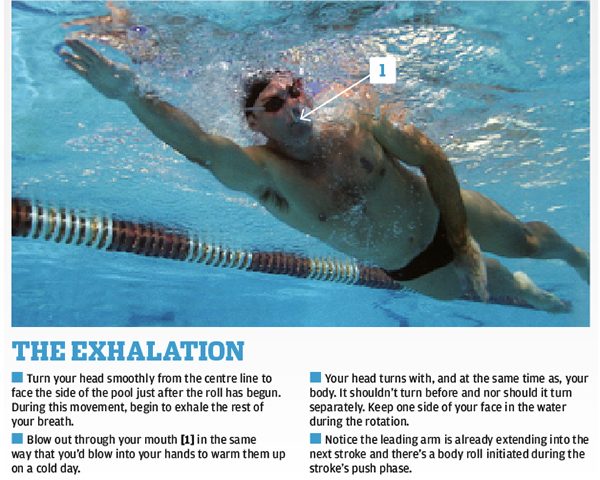 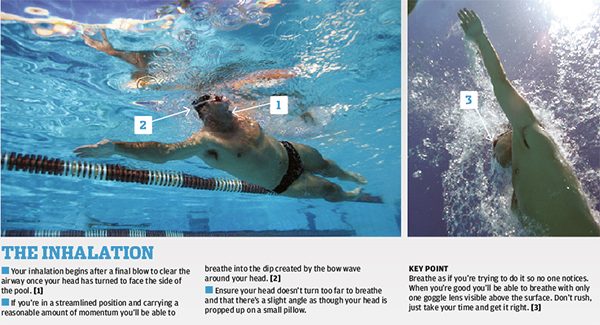 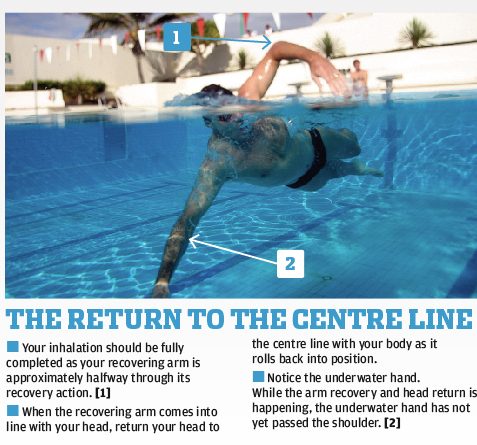 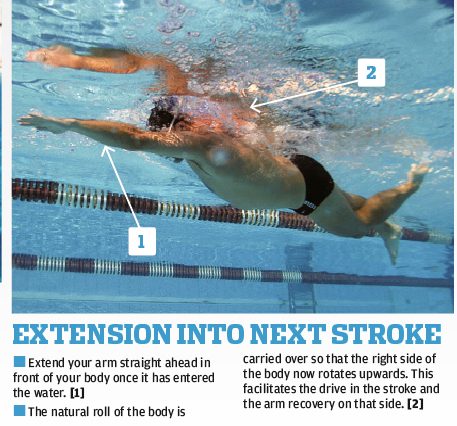 1. Practise fitting breathing into your stroke by standing, leaning forward, in the shallow end of the pool. Submerge your shoulders below the surface and extend one arm while keeping the other by your side.

Take a breath and put your head face down in the water. Leave the extended hand where it is and begin to exhale, turning your head 90º to the side as you do so. You should finish breathing out just as your head reaches the 90º mark. Now begin inhaling, taking a good clear breath before turning your head back to the centre line.

Breathing practice should be performed slowly and repeatedly until the timing becomes easier and your head movements are smooth. It may be helpful to stand with one leg in front of the other as this helps the natural
roll of the body.

2. Now practise breathing in the full stroke cycle. Swim slowly, over short distances. Aim to improve efficiency before you increase the distances. It’s important to learn the timing so you can breathe on every stroke. This ensures you’ve achieved the correct timing of the stroke and aren’t rushing any aspect.

There’s no rule as to which breathing pattern is best, it’s down to whatever suits you and what is most practical. It’s no good breathing on every fifth or sixth stroke in a triathlon when oxygen is in high demand.

How important is bilateral breathing for beginner swimmers?