Sprint & super-sprint triathlons: 14 of the UK’s best for beginners

Made the decision to do your first triathlon and want to know which one is the best for the tri newbie? Here, are what we think are, the UK's top 14 short offerings perfect for those dipping their toe into triathlon waters for the first time

Completing your first-ever triathlon will be one of the most life-affirming and unforgettable multisport memories you’ll ever create.

How to train for your first triathlon

What are the different triathlon distances?

15 training tips for the beginner triathlete

But how to pick the race for you can be one of the biggest challenges, with the course, location and multitude of distances all key factors to consider.

Here we’ve picked 14 of the best beginner triathlons in the UK. We’ve gone for open-water swims for all of them, and have chosen of mix of grassroots events, mammoth spectacles and scenic beauties from across the land to give a wide and varied mix.

And remember that they’re not just for beginners, with many offering fast racing for PB smashing and a host of longer distances.

Wetsuits are often banned for temperatures over 22C or 24C, so we’ve decided 19C is the optimum water temperature; pretty warm but not at risk of being a non-wetsuit swim, which will often be disadvantageous to weaker swimmers. Lake swims are our preferred water body of choice, while an ever-so-gently rolling bike course is seen as ideal (and one on closed-roads is best) instead of pancake flat, where you will have to pedal continually.

Time then to pick our 13 best beginner races from the UK. Let us know if you agree in the comments below!

Much of the success is down to the care and welcoming ethos of the Chester Tri Club organisers, with beginner’s seminars and training days held before the race. The race starts with a point-to-point swim in the River Dee before a well-marshalled 25km bike and flat riverside run. 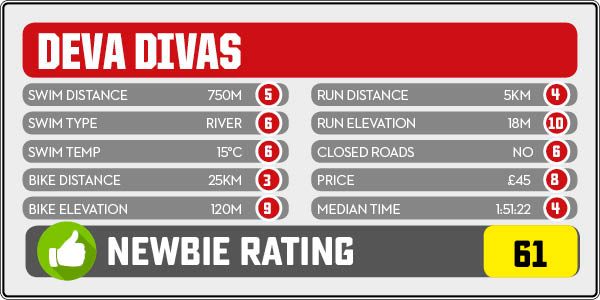 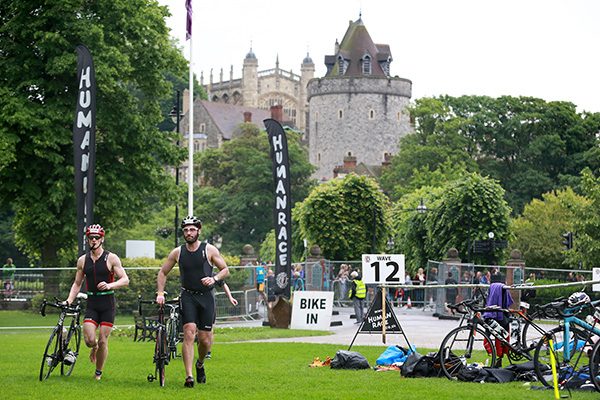 Okay, there may be easier beginner triathlons, but we’d be hard-pressed to pick a greater race to do your first tri than the Windsor Triathlon.

Held since 1991 and perennially popular ever since, no other UK race oozes tri history like Windsor. How often do you get to swim in the shadow of the Queen’s gaff and bike on open roads around the Great Park?

The notoriously early start, river swim and nasty Castle Hill on the run won’t suit all, but for any beginner to triathlon wanting to experience a race etched in multisport legend, we’d recommend the Windsor Triathlon over any UK race. And the crowd-lined final discipline is arguably the greatest run course in UK tri. 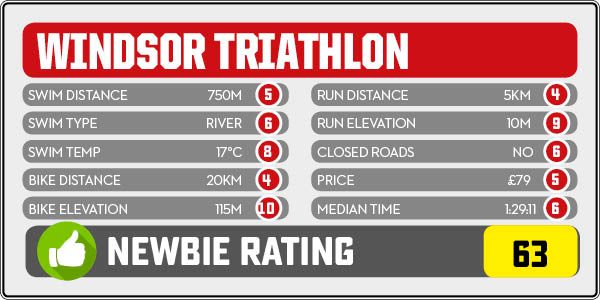 Belfast is thriving as a tourist destination, and there are few better ways to explore the city than on a swim, bike and run journey on closed roads.

The swim takes place in the sheltered waters of Belfast Harbour, the bike is pancake flat around the Harbour Estate before the multi-lap run course takes athletes through the heart of the city and around City Hall. The route is very fast throughout, although the bike section can be subjected to winds blowing down Belfast Lough. 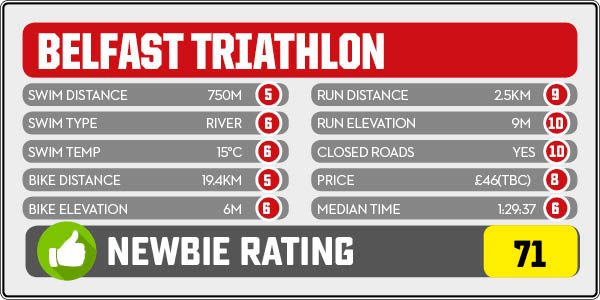 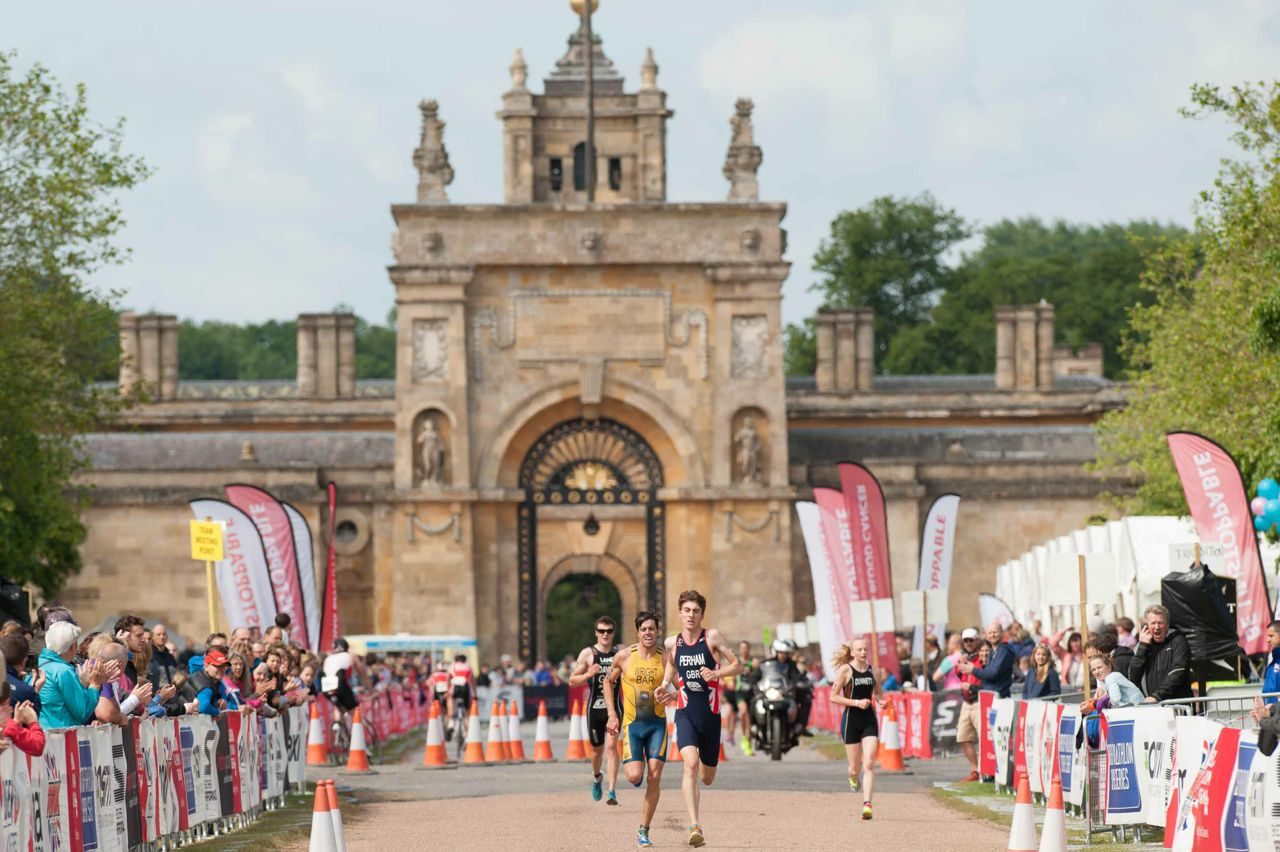 Blenheim has long been a must-do event on the UK tri scene. Set against the majestic backdrop of Blenheim Palace, the race sees some 7,000 athletes traverse the historic grounds over the weekend for the super sprint- or sprint-distance races. And it’s all set within the Blenheim Palace grounds on lovely traffic-free courses flanked by thousands of spectators. 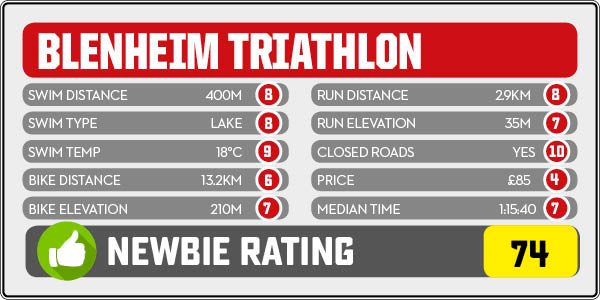 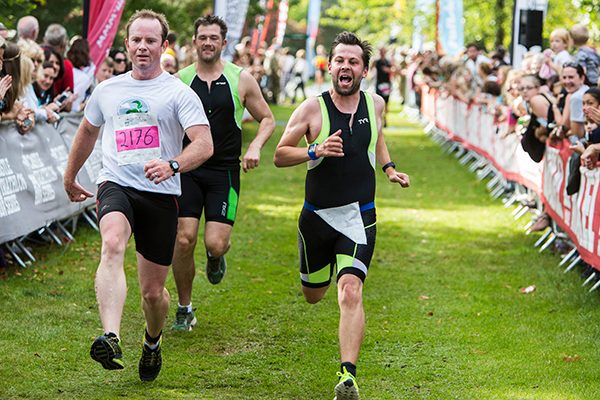 Since 2009, the Hever Castle Triathlon has established itself as an essential fixture on the UK multisport circuit. The race hosts the biggest children’s triathlon in the world with 2,000 junior racers, the UK’s second-largest tri event and the finale of the five-date pan European Castle Triathlon Series, held at fortress locations in Ireland, England and France. And the location has plenty of quirks for athletes and supporters, from searching for the ghost of Anne Boleyn to spotting filming locations used in the fantasy classic, The Princess Bride.

For beginners, there are countless distances to pick from. The races commence with an open-water swim in the shallow Hever Castle Lake. Post-T1, the bike leg is a rolling affair before the largely off-road yet light trail run circumnavigates the estate and leafy castle grounds, before making the dash down the tree-lined finishing chute and into one of UK tri’s most family-friendly and fun expos. The 11am start for the 200m/15km/2km Starter Tri is also most welcome. 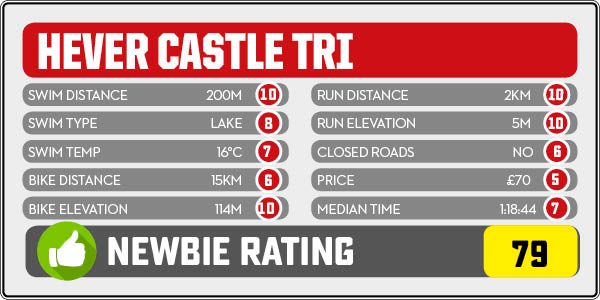 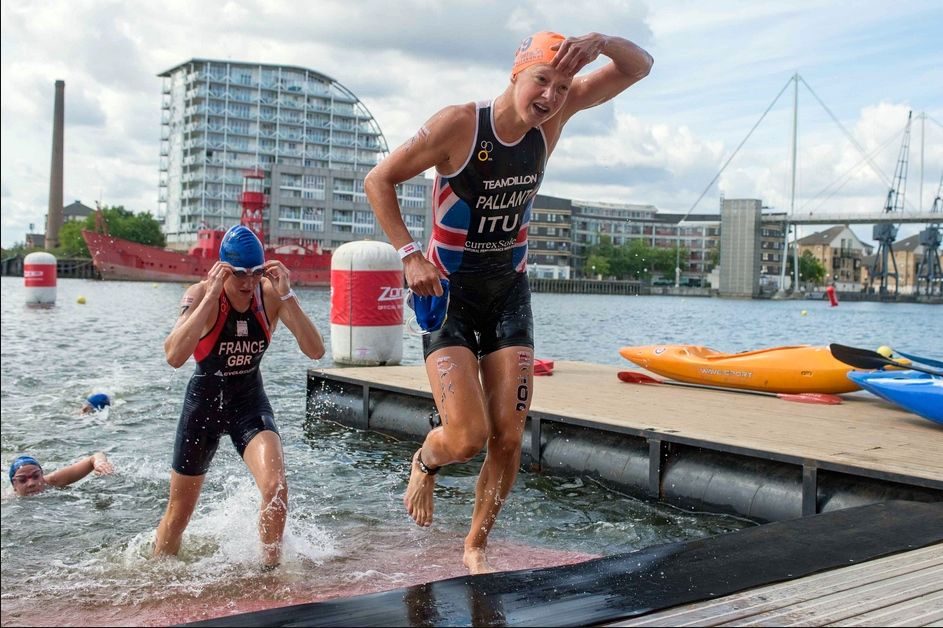 We have two in equal 8th on 80 points each. The first is London Triathlon is a biggy of the multisport circuit. And by biggy we mean over 13,000 triathletes competing across super sprint, sprint, Olympic and Olympic Plus distances – plus a myriad of relay options – over two days at the ExCel Centre in the London Docklands. So big is the London Triathlon, in fact, that the race has superseded the Chicago Triathlon as the largest in the world in terms of participation.

While the Docklands-setting won’t be give famed tri beauties Blenheim, Hever or Windsor any sleepless nights, the sheer scale of the event has few rivals on the triathlon circuit. The vast army of marshalls, medics and technical officials – triathlon’s invaluable supporting cast – should take a major credit in the mammoth logistics of the operation, shepherding 13,000 athletes over the weekend in and out of the world’s largest transition area is no mean feat.

With around a third of the annual influx of over 13,000 athletes being beginners to the sport, the fast and flat London Triathlon has played host to thousands of debut triathlon experiences, becoming an important rite of passage for age-group athletes across the British Isles. 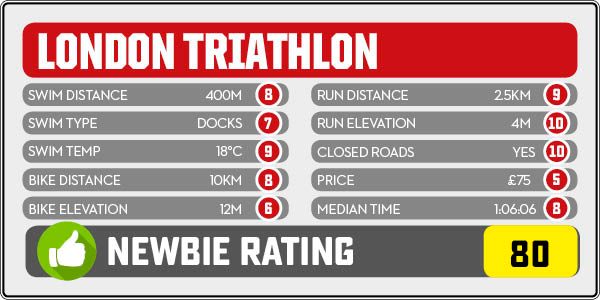 Hamstrings: What they are and why they’re important

Why does my ankle hurt when I run?

Triathlon transition: 10 common mistakes and how to put them right

Protein: how much do you need?

What is lactate and lactate threshold?