With beads of sweat multiplying on his forehead and his car failing to shed the summer heat, Arthur Gilbert decided it was time to ditch the Ford 8 and start cycling the 20-mile round trip to work. While the car park outside a helicopter factory in Weston-super-Mare may not rival the lava fields of Kona when it comes to triathlon mythology, it was here that Gilbert’s extraordinary multisport journey began. The year was 1987 and he was 66.

Encouraged by local tri coach Alan Pendleton, Gilbert would soon join the Burnham Harriers running club, completing his first triathlon in 1989. His maiden national age-group duathlon title was scooped in 1992. “I remember seeing a young Spencer Smith racing,” he recalls. “The lead car in front of  the athletes was going around 40mph. Spencer went past at about 45mph!”

As his treasure trove of multisport memorabilia in his Burnham house testifies, national duathlon age-group titles followed on six further occasions. The main problem was finding participants in his age categories to compete against. “I’ve never found anyone to race against my age for a long time now. In 2003, when I was 82, I was the first over 80 and the first over 70 at the British Championships. It’s ridiculous really.”

An MBE followed in 2008, with Prince Charles personally giving him the award. “I thought: ‘Why me?’ But I realised I’ve been doing charity work since 1974 and have donated 45 pints of blood since 1951 – although they stopped me at 65 when I was a few donations off getting a gold award.”

International media recognition, his own Wikipedia page and the official confirmation of his World’s Oldest Triathlete title were next on Arthur’s roll call of honours. He then carried the Olympic torch through Minehead on its national tour in 2012. But what can we learn from Arthur’s longevity? We got on our bikes and took a ride on the Somerset Levels with the nonagenarian to find out… 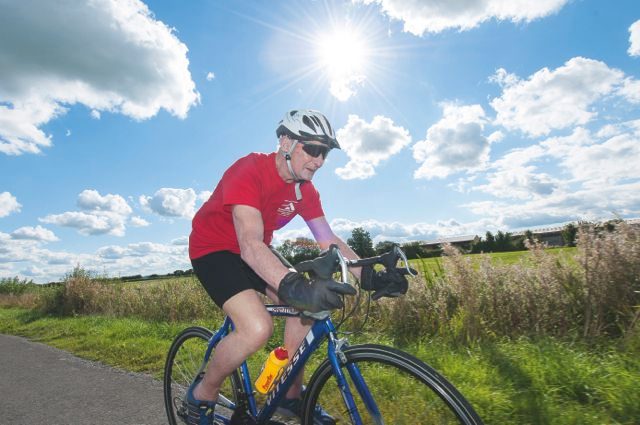 Arthur Ellis Gilbert was born in Portsmouth in 1921 – the year Shackleton set sail on his terminal voyage – but his family relocated to Ilford in Essex before Arthur reached his teens. His father was in the navy and the family home was destroyed during the Blitz.

Arthur was enlisted in the RAF throughout the conflict and was stationed in Sierra Leone, West Africa, in a setting straight out of Joseph Conrad’s Heart Of Darkness. Scroll through his race results and you’ll see a noticeable lack of open-water swims, an absence explained by his war experience.

“I was on coast command along a river and the place we were staying was called Jui, which became named as the Swamp of Death or White Man’s Grave. There were 13ft crocodiles in there. So I only swim places now where I can see the bottom of the water. Anyway, I mustn’t rabbit on about the war… It is history now.”

A move to the Somerset coast (via Lichfield) followed at the war’s end, where Arthur became a helicopter engineer at the Westlands plant in Weston-super-Mare, scene of that future car park epiphany in 1987. His sporting prowess had been evident through his highly impressive achievements in judo and, along with cycling over 100 miles a week, he joined the Burnham Harriers run club under the watchful eyes of Brian Beale and Sheila Baker.

After his first national age-group duathlon title in 1992, Arthur suffered his only major injury. “I ruptured a tendon in my left ankle in the mid-1990s and now have to wear orthotics for my shoes. My left ankle always points out a bit now, so I can’t clip into cycling shoes.”

Arthur’s near-unblemished injury record would make Alistair Brownlee curse. “I’ve pulled the odd muscle,” he admits, “but everybody does that. My dad was a fantastic swimmer and lived to his late 80s, maybe it does have a lot to do with the genes.” At 5ft 10in and 73kg, he cuts a lean, lithe figure.

The sea air of Burnham, his awareness of overtraining and a little bit of luck are additional factors in this serene injury record.

“I get concerned with people in my club that they’re just doing too much running. I’ve never really raced longer than 10k. And pounding the pavement can do you a lot of damage in later life. It’s better to run on the beach or off-road to provide some cushioning. Also, I’ve never had a bike crash. I don’t even think I‘ve ever had a puncture.”

Recent research from Birmingham University and the medical journal The Lancet has reported the benefits of an active body and mind in keeping healthy in later years. Away from his multisport interests, Arthur flies model aircraft, plays the ukulele and, when cajoled by 220, admits that the microphone on his sitting room floor is for performing karaoke along to the recordings of war-time singer Jo Stafford in the evenings. “Every time I sing she turns in her grave!” 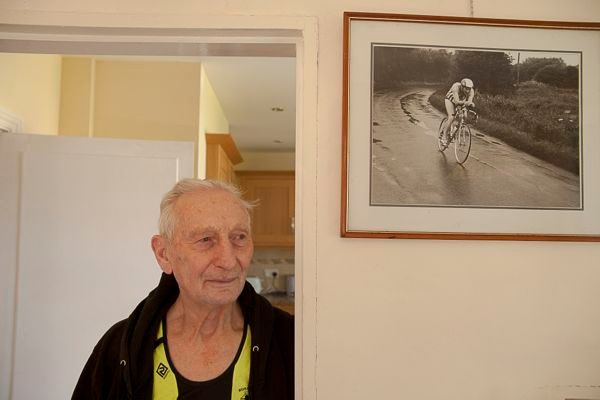 Having recovered from the ankle injury – and guided by top south-west-based coach Mike Gardner – Arthur was back to winning national duathlon honours in 1997, with a glowing profile in the pages of 220 later
that year wishing him many more years of competing. More national duathlon titles followed in 1998, 1999, 2000, 2002 and 2003. Arthur’s only regret seems to be the World Duathlon Championships at Calais in 2000.

“That was a strange race. I was 79 and my main competition was an American chap who was fantastic on the bike. I stopped for a drink and got pulled off the course by two officials who said I couldn’t continue. I think they thought I was in trouble! They didn’t speak any English and I didn’t speak any French, so it was all very confusing, but they wouldn’t let me continue. The race organiser said they’d no right to do that and I got reinstated in fifth position in the end.”

Arthur lost his wife Betty to cancer in 2008, before suffering every parent’s worst dream the following year when one of his sons, David, died of lymphoma. “My younger son died 18 months after my wife. Grief can bring about illness and I had pneumonia during this period. My son was just 55, but you have to be positive. I try to think about all the good things we had together.

“I have a lot of help and I’m motivated by my local supporters and wonderful family [his son Paul and granddaughter Natalie, a successful sportswoman in the motorsport of hillclimbing]. They, along with regular training and the fact this is all for charity, help keep me going. Younger people keep you young. I don’t talk to many people my own age!”

The Burnham-on-Sea Academy (see our Olympic Legacy piece in issue 289 for more) provides a multisport base for Arthur, who’s a regular sight at their swimming sessions and Sunday rides. He was awarded the world’s oldest triathlete title by the World Record Academy after completing the club’s 2011 sprint event in 2:45:21, with his most recent race being this year’s super sprint in 1:27:48. 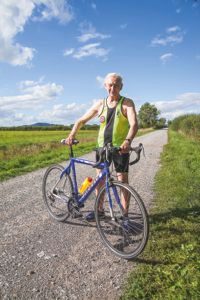 Admittedly, Arthur has, every season for the past five, announced that he’ll retire, yet the lure of triathlon, the community and the esteem that he’s evidently held in by the juniors in Burnham has brought him back for more.

Without wanting to descend into unabashed sentimentality, it’s difficult to have a conversation about Arthur around the Burnham Academy without the word ‘inspirational’ being uttered by every generation of members.

He may have some competition from a certain 5th-century knight in being Somerset’s number-one Arthurian legend, but we have a sneaking suspicion this is one tale we haven’t heard the last of yet.