After coming third in her Ironman debut, Corinne took the relatively easy decision of turning pro. But, as she tells Mike Anderson, the hardest bit is now making it work, especially when injured…

Corinne Abraham’s first-ever long-distance tri was at Ironman Regensburg in 2010, where she finished third woman overall, beating 10 established pros in the process and clocking an impressive 9:41:21 time. The result meant Abraham could consider a career as a professional triathlete.

But, despite her meteoric rise in long-distance tri, Corinne didn’t have a conventional background in endurance sports. She played volleyball and did martial arts. And although she’d twice run the London Marathon (in 2006 and 2008) there was no indication that she was about to turn into a world-class endurance athlete.

“I just decided to run the marathon, did some training, then went and ran it. No stellar results. I ran 3:42 in my first and 3:50 in the second. So when I decided to do Regensburg I had a monster on my shoulder about the marathon section.”

Corinne’s solution to the problem? Do an ultra challenge. And so she entered the Druid Ridgeway in 2009, a three-day race that covers 84 miles – just over a marathon every day. It seemed to do the trick.

“I trained for 10 weeks, ran it and absolutely loved it!” she laughs. “So that was it, monster gone and time to train for an Ironman.”

A huge setback in the early stages of turning pro was a recurring back injury that seriously hampered Abraham’s bike and run performance. Even worse, there was no real diagnosis; rather an amalgamation of factors that were causing problems.

“I had a disc prolapse, which was a factor,” she says. “It was also poor muscle activation and coordination patterns, and an improper bike fit for my body type.”

A bike change and fit had the desired effect, helping to make long hours in the saddle more manageable. But there were still the issues of hip instability and poor muscle activation patterns in running to combat. For this, Corinne had to adjust her training.

“I do brick sessions habitually,” she says. “That will be a bike with increasing intensity towards the end, and then I’ll run up to 16km off the bike at Ironman race pace.”

Despite having qualified for Kona she didn’t take her place on the start line in October 2012. “Basically, the prize money from the Ironman races I’ve placed in doesn’t come close to covering the costs. Any athlete that goes to Kona from the UK would need to place seventh to break even. While I think I’m getting up to that standard, the risks are pretty high and the gains don’t outweigh them.”

Given her amazing progress as a pro already (see here for her dominant Ironman Melbourne win), don’t bet against seeing Abraham in Kona’s top 10, at least, in October. 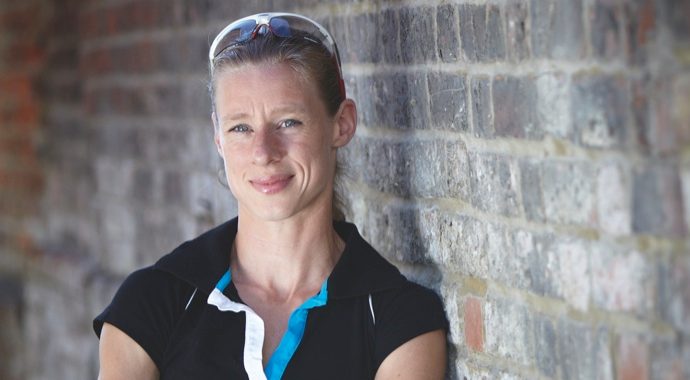 Reflecting the race distances, Corinne’s week focuses on the bike

1. When you get a repetitive injury, don’t worry. See a specialist and systematically figure out what has been causing the problem.

2. Make sure your bike fit is correct. Especially in long-distance tri, you’ll spend an awful lot of time on the bike. If your bike isn’t set up correctly it can cause a lot of niggling injuries and muscle problems, as well as decreasing your power output.

3. Don’t neglect strength and conditioning. It’s very tempting to purely focus on swim, bike, run, but S&C improves core strength, durability and flexibility. It’s especially important for triathletes who have three sports to master, and have to keep their whole body in prime condition.

The Iron Cowboy is back with a bigger than ever challenge

5 of the best triathlon watches reviewed