After a second-place finish in 2011, Jacobs became King of Kona in 2012, fending off strong opposition in the form of Andreas Raelert. At just 31, the Aussie champ and his super strong marathon could dominate on the Big Island for years.

“I’m always working on my technique and changing it to work on different muscles. This year I was focusing on trying to use my lat muscles more to avoid my pec muscles tightening up, as this makes my shoulders pull forward and affects my run. I swam less this year, as I was comfortable that I could swim with the main pack and didn’t need to try to stay with Andy Potts off the front.”

“I focused more on my bike, with greater motivation, so I rode a few more hours each week. But nothing else changed much from previous years other than my taper. I knew I was a better biker then my previous results on the bike in Kona showed, but I felt flat on race day. I got former pro cyclist Henk Vogels to write me a two-week taper programme and it worked as it should. I felt so fresh on race day and was able to push to my full fitness levels on the bike. That was
the difference.”

“I used the same programme as previous years but, as I had a longer uninterrupted build-up without injury, I was able to increase the distance in my biggest weeks from previous years. I ran 100km three weeks in a row and thought I would run better than I actually did in Kona, but I was flatter from being able to push harder on the bike.”

“I was doing physio exercises nearly every day and had a list of movements that switched on or stretched muscles accordingly. I did get more massage and was diligent with foam roller and self-massage. My nutrition was slightly better, too, in the form of probiotics and mineral supplements.

“Psychologically, I went to Kona with a mantra of forgiveness, love and happiness. It made the week less stressful leading into the race and, on race day, I enjoyed more moments than ever before. That gave me focus and adrenaline usually only gained from music.” 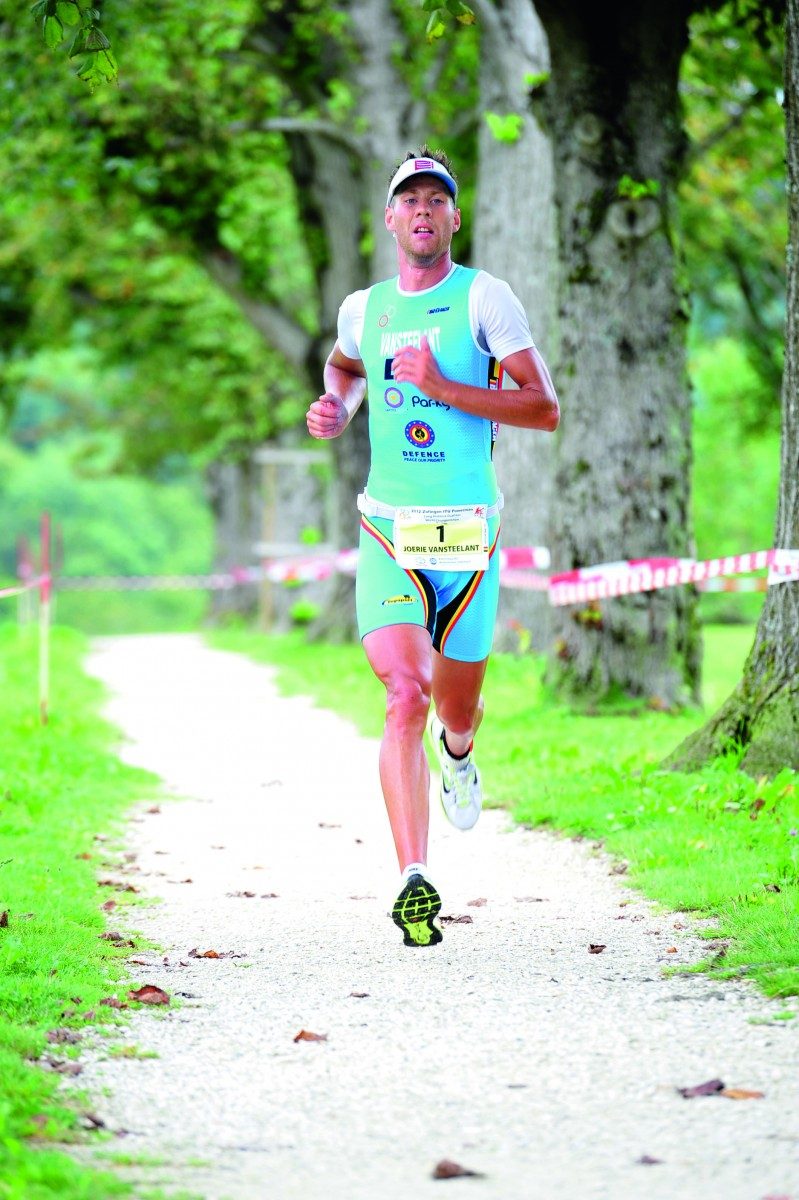 Hailing from Tourhout in Belgium, 30-year-old Joerie Vansteelant won his fourth long-distance duathlon world title at Powerman Zofingen in 2012. After such dominance on the duathlon scene, he’s started working on his swim with a view
to making the move into triathlon.

“I didn’t change anything on the bike this year: I’ve had three years on the same type of bike in exactly the same position. The volume and intensity of training was more or less the same.

“During winter I work on my power and, closer towards the race season, I’ll put in more and more longer efforts climbing, on the flat or even slightly downhill, depending on the race I’m preparing for.”

“During winter I tried to develop the ‘natural running’ style, but finally I decided not to invest more time in it. It’s very interesting, but at 30 it’s a bit late to change my run style.

“This year I also did quite a few very long endurance runs during winter. My goal was to be fresher during the last part of Powerman Zofingen and I think it worked really well.”

“I started working on the swim a little, which is completely new for me. We’ll see how I develop for the next years. “I changed my nutrition a little for the long-distance races this year. Before, I used 65g of carbohydrates per hour. Now I try
to take 75g/hour and it works much better. I might even try to use more in the future.”