In 2008 a small group of close friends formed their own triathlon club called the Viceroys named after a scooter club one of the founding members belonged to in his youth.

The club failed to grow as it was based on friendship and had no form of structured coaching or training. However in 2010 one of the members, Mark Yeoman, looked to take it forward and create a warm and friendly club in the leafy suburbs of Walton-on-Thames in Surrey.

A PE teacher for more than 16 years, Mark gained his level 2 coaching qualification and looked to utilise his racing experience to help grow and develop the club. The club – whose motto is ‘Never show weakness’ – now boasts a capped membership of 115 triathlon members and over 50 in a growing cycling side. Success has quickly followed: an impressive 17 of his members have qualified to represent Britain or Ireland.

“When I re-started Viceroys, my focus was to create a warm and friendly club with a strong supportive social aspect. I was coming across too many triathletes who didn’t have access to a club. Their main reason was because they found them intimidating or too expensive to join.”

Mark says that the best way to improve and meet your goals is to train with likeminded people, have access to regular structured coaching and more importantly, learn from others experiences in a supportive and social environment. Knowledge and understanding is everything.

“I love teaching and coaching is just an extension of that for me. As the club grew, so did my own levels of coaching both within the club and outside. I run two main coaching sessions each week as well as other directed club sessions.”

“Monday is the club’s coached open-water swim session where I run three 30 minute sessions at the stunning Shepperton Lake,” says Mark. “I look to develop their confidence, open-water skills such as sighting and drafting, and incorporate honest hard work.”

Mark adds that a typical session would involve simple key points to focus on throughout the session, such as touching your thigh at the end of your stroke to keep it long. This helps them maintain focus when I am getting them to chase down a partner in the water, or how to remain calm when swimming in a close group.

“The advanced group get the other side of coaching. Their technique is more stable under pressure – meaning at speed – so I look to give them short recovery periods of 15 to 30secs between efforts.  At the end of every session we always re-create a race situation.

“The group will swim behind the kayak which I coach from and when I move away, they are to race into the beach and exit the water and take their wetsuit off at speed. This enables them to use the skills learnt in the session and practice getting out of their wetsuit at speed. It’s the fourth discipline so it’s important to practice every time you’re down the lake. There’s no excuse for not being able to get out of your wetsuit in under 10secs.”

The comes Wednesday evening, when the club meets at a local running track – not everyone’s favourite place, according to Mark. “Many hate the track and I always look to make these sessions productive for all. Adapting the sessions is key to ensuring that they progress safely.

He recognises that track sessions can be hard on the body if you are not used to it, so if he sees someone struggling to maintain form and pace, then he will get them to miss a repetition or take a recovery lap. Quality is key.

“In the beginning of the season, the session would be commonly based on building strength of body and mind. 3x 1200m 4x 800m and 4x 400m is a typical session. What I manipulate is the pace or recovery. Whereas now, the group would be comfortable at 4x 4x 400m with each set at different goal paces or reducing rest recover.” 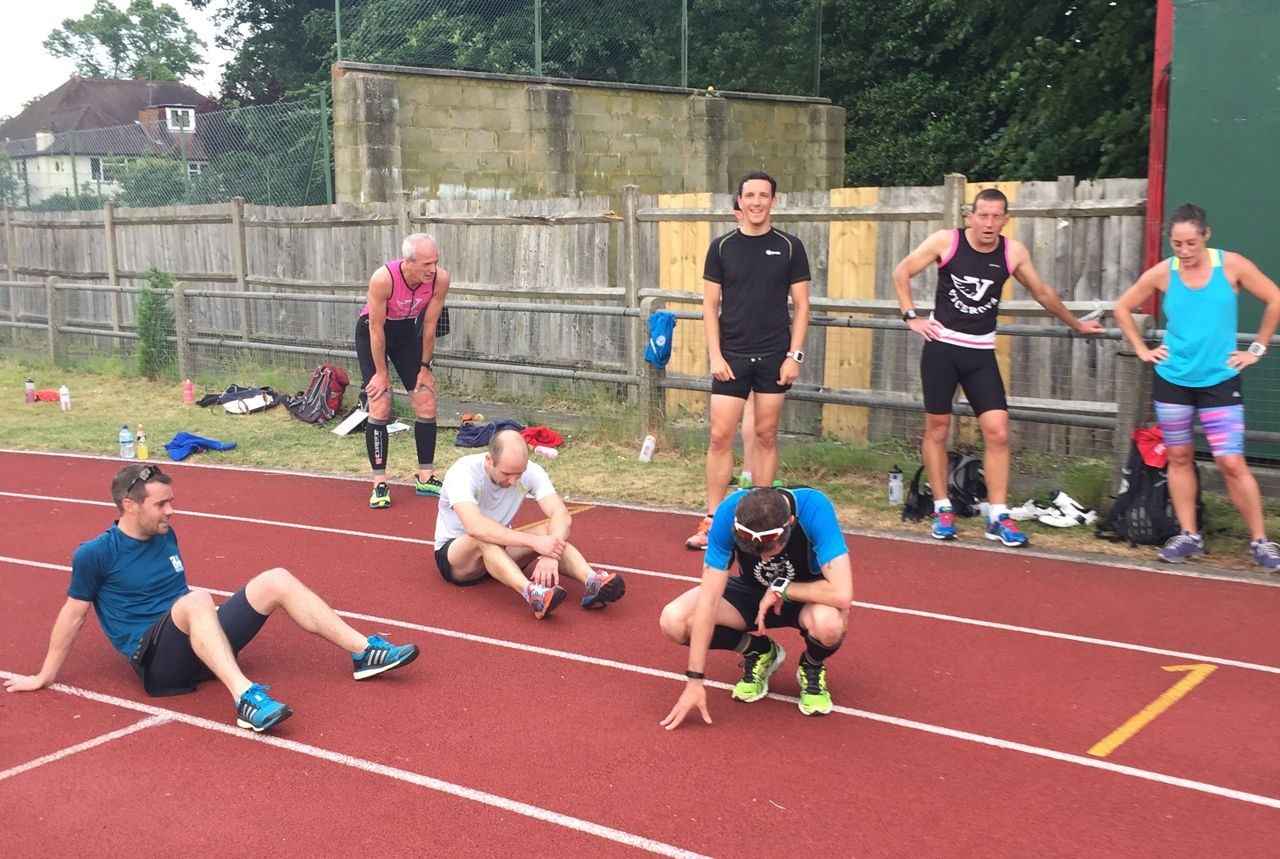 ‘Cat-and-mouse’ is a regular closing session, adds Mark: the slowest person goes off first over the 400m and then each person sets off when they think they can get around in their fastest time. “Seeing 20 people come down the home straight neck and neck is quite a sight. This aspect of competition gives every one of any ability the chance to win – bandits are never forgotten.”

Lucy Charles-Barclay on going sub-8hours for an Iron-distance

How to do tricep dips

Avoid disaster at your first triathlon