Make no mistake all 11 of these Ironman distance triathlons are tough and not for the faint-hearted, but which is the toughest long-distance race of all? We crunch some stats to find out...

In 11th place is the triathlon that is famed as the most scenic tri in the world, but how does this Challenge beauty fare in the beast stakes as well? Let’s head over to New Zealand’s South Island to find out…

“Wanaka is beautiful, but it’s beautifully brutal too, so don’t let the scenic mountains and gorgeous lakes lull you into a false sense of security,” says Laura Siddall who came 2nd in 2015.

“If the wind is up, the swim can be choppy. The bike course has no let-up; it’s constant rolling terrain and the road surface is a killer, with the chipseal just adding more excitement. You’ll always get some wind, and there’s no real place on the course to escape it, so you just have to manage however much wind turns up! The run is again one of the prettiest run courses ever. For 75% of the race you’re on trails and tracks, which take you along the banks of the Clutha River, before you’re faced with Gunn Road, a 1.5km steep hill that you’re lucky enough to face twice. Wanaka is, however, my favourite race, and you’ll keep wanting to come back once you’ve done it.” 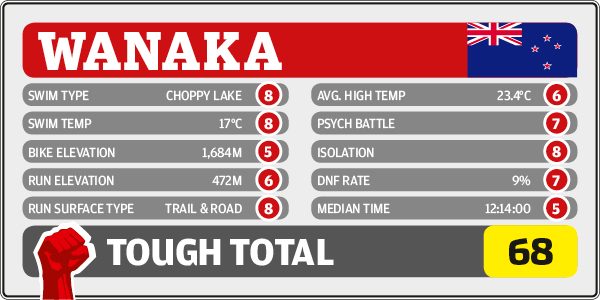 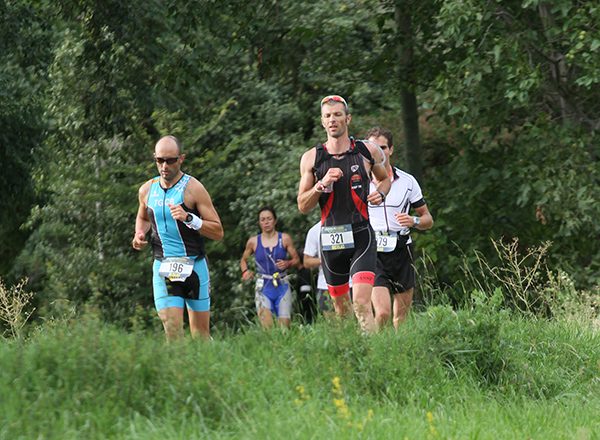 With 3,600m of climbing on the bike alone, this southern France-set classic has been troubling triathletes since 1984 and is in 5th place on the list But are you brave enough to battle Embrunman?

“From Hawaii to Lanzarote and Bolton, out of all the Iron races I’ve done Embrunman is the toughest,” says Bella Bayliss, three times winner.

“Diving into the water at 5:50am in the pitch dark is certainly different! 188km on the bike with some really decent climbs makes for a long day out. The marathon isn’t so hard, just tough after an extra hard bike. Sometimes I’ve raced Embrunman when it was snowing on top of the mountains, sometimes in heat waves in the valleys, so this also plays its part in the day. Put simply, I love it. It’s a true test of fitness.” 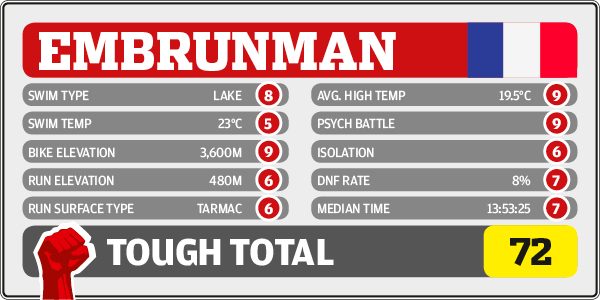 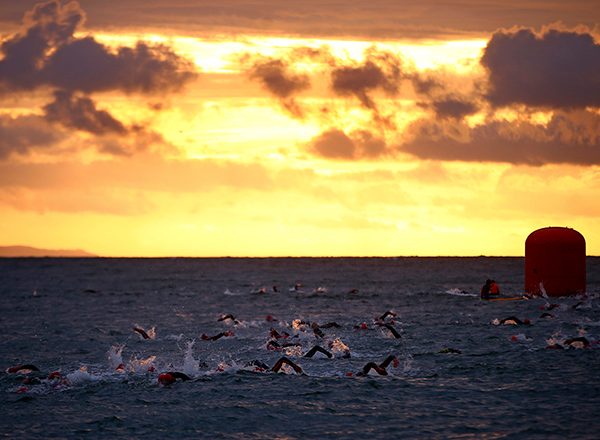 “Once you finish Wales you know you can finish anything,” says reigning champ Lucy Gossage on this painful day in Pembrokeshire.

“Everyone knows I love a tough Ironman. As someone who’s won both Lanzarote and Wales, I think it’s fair to say the tough courses suit me.

“Of all the races I’ve done, Wales is probably the hardest, but also my favourite. The choppy swim, the long, long run uphill to T1, the relentless hills on the bike and the marathon that’s, quite literally, entirely up or down, make for a physically tough day out. Add on the high probability of somewhat inclement weather and there isn’t much about it that’s easy! On average, Wales is probably an hour (at least) slower than other Ironman races. But I’d argue that it’s more rewarding. And once you finish Ironman Wales? Then you know you can finish anything!” 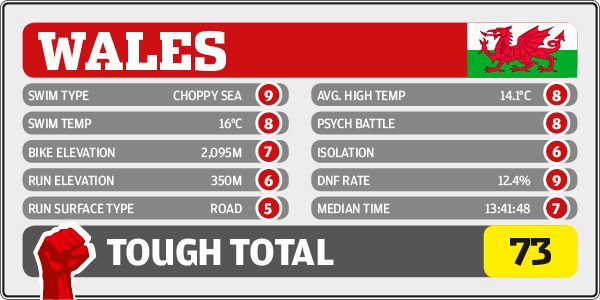 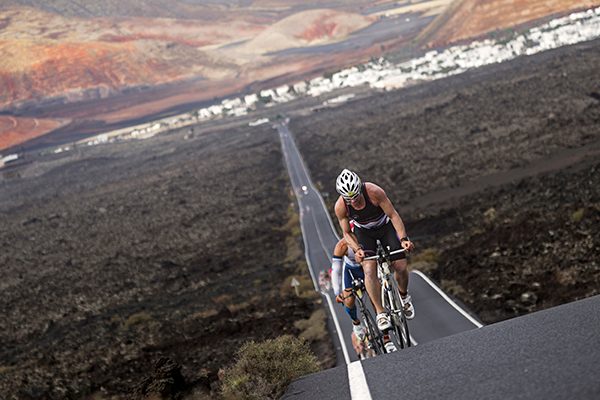 Next on the list is Ironman Lanzarote. Wind, heat, hills and more wind. Ironman Lanza is a long-established classic on the calendar that’s been putting triathletes through the wringer for over two decades…

“Of the 12 Ironmans I’ve done, Lanzarote is the hardest by miles, which is my excuse for why it’s also my personal worst time by over an hour,” says Martyn Brunt who came 782nd in 2011.

“After a swim with more aggro than a 1980’s football punch-up, you take on the infamous bike course and its unholy trinity of heat, hills and wind that make you feel like you’ve headbutted a comet. Finally, there’s the boiling hot marathon conducted in full view of the many bars of Puerto Del Carmen with their tantalisingly out-of-reach glasses of cold beer. Somehow it’s all worth it when you shake [race organiser] Kenneth Gasque’s hand at the finish line, though.” 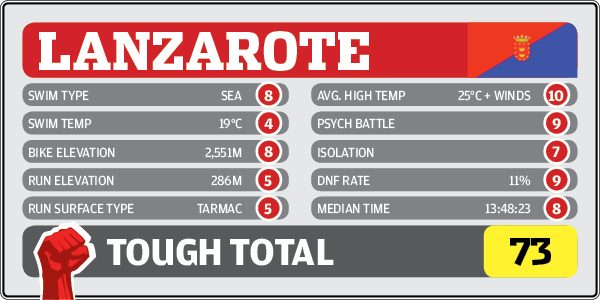 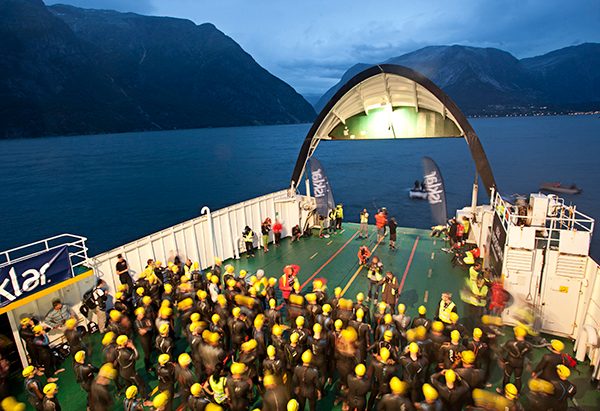 Long fabled as the hardest race on planet tri, the Norseman is so tough you’ll need a support crew throughout. And with a 15:35hr median finish time, the stats don’t lie…

“The Norseman is an adventure. I could prepare for Kona,” says Tim DeBoom who is a two-time Ironman world champ and won here in 2011, “but this one is a lot more abstract as you have to train on the course descriptions. The swim and the bike were what I expected, but the final 20km of the run caught me off guard. There’s a 12km section with a gradient of 10% called Zombie Hill, and that’s a good description. The finale is a 1,500m slog up rocks and scree – it was like power hiking – that ends at the top of Gaustatoppen. Put simply, it’s the toughest race I’ve ever done. 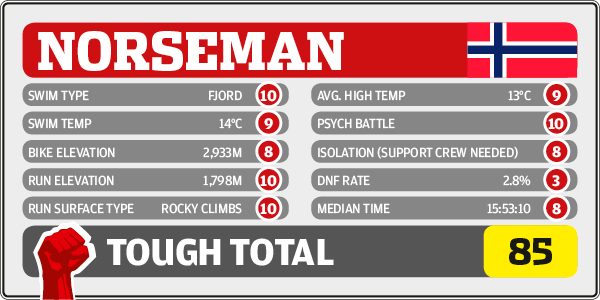 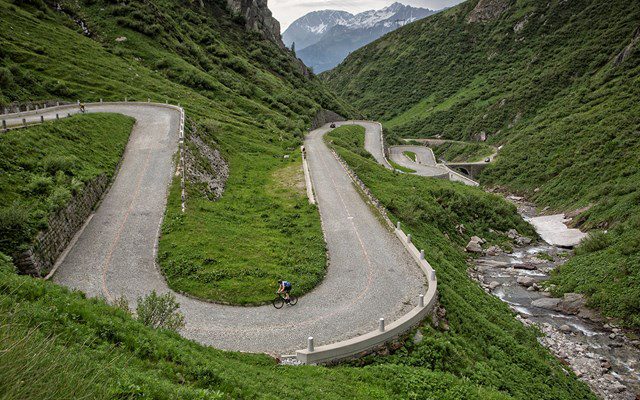 As part of the Xtreme triathlon races, Swissman – along with Celtman and Norseman – is definitely one of the hardest and most beautiful races in the world. How does it fare in our Iron showdown?

“When I travel to Switzerland I take all my gear and winter clothes: jacket, rain jacket, rain trousers, hat, gloves. Be prepared to wear extra layers of clothes,” said Julia Nikolopoulos, 3 x Swissman podium athlete. “For bike training, you need to do a lot of climbing and riding downhill. For the run it’s a good thing to train for the uphill, but the muscles also need to be prepared for the downhill.

“Don’t forget to eat during the race. You need a lot of energy for this (especially if it’s cold) and having a bonk here is no fun.” 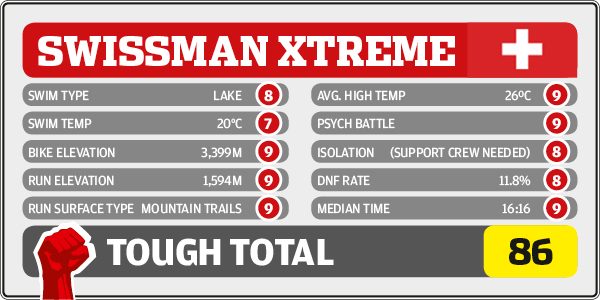 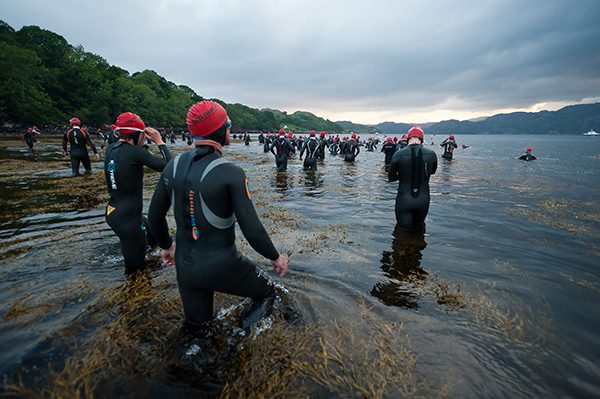 It’s a sibling to the Norseman in the Xtreme Tri family, but this North West Highlands event may be even harder than its big bro. Time then to assess the Celtman’s tough cookie credentials…

“The Celtman experience is an adventure in nature and a battle against the elements, as much as it is a race against fellow competitors,” says Chris Stirling who came 2nd in 2015.

“A bracing swim in a Scottish sea loch full of locals (jelly fish) starts the day. The bike is 202km and you’re exposed to Atlantic winds on the hilliest parts. Expect the final 40km to be into a headwind with long, draggy climbs, lonely and exposed. Onto the run, it’s uphill straight off to shake the biking legs before the mountain of Ben Eighe looms. The climb to its summit is like a wall (over 950m of ascent in a few kms), basically it’s extreme power hiking onto the rocky spine of the mountain. The rough downhill has your quads in agony, before a final cruel stretch of flat tarmac to finish. Yet it’s worth every second of pain… 1,000 times over.”

Check out some photographs from the 2015 Celtman Extreme 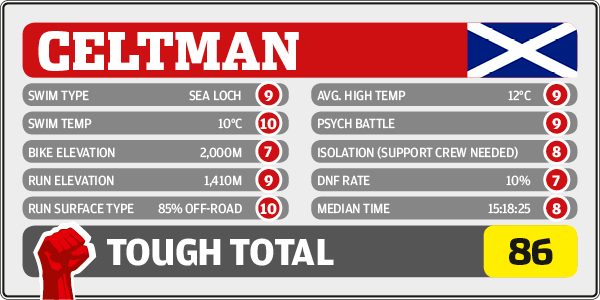 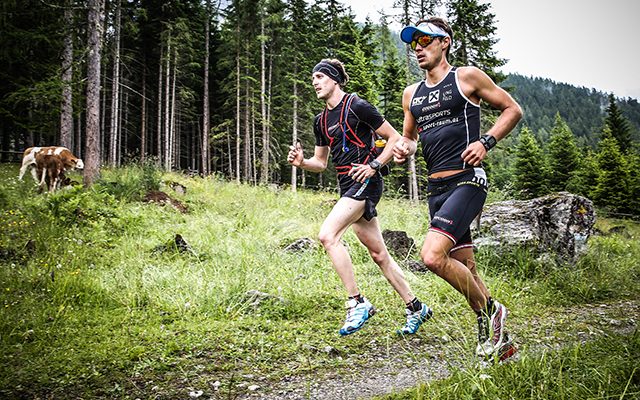 “Bring a big pack of mental fitness for this race,” said Michael Strasser, 2015 winner. “The Austria Extreme is very hard, with four mountains on the bike – and sometimes headwinds in between the climbs. So don’t bring your disc wheel. You should bring a low-gear-cassette; the final climb on the last mountain is the steepest and all athletes will are tired by then. Make sure you choose to pack a bike jacket; it’ll especially be needed on the downhill sections.” 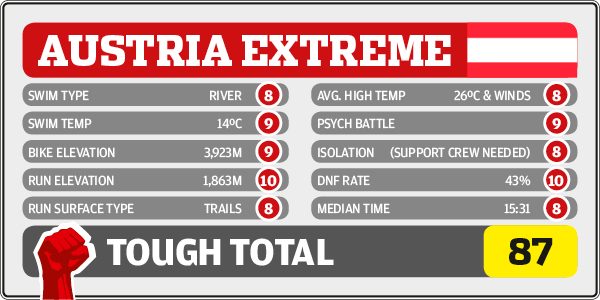 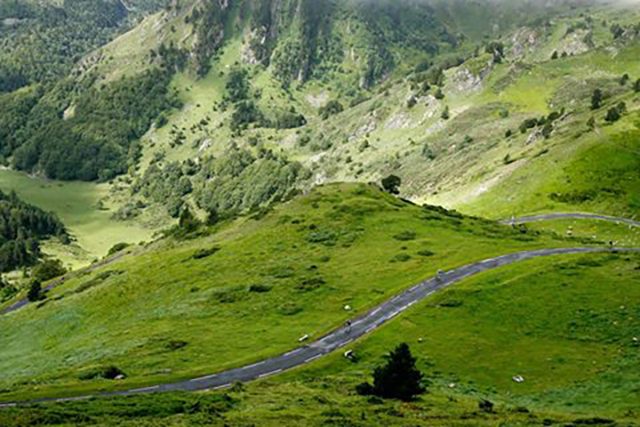 Five thousand metres of elevation on the bike? A 25% DNF rate? Holy moly! Time to assess the Pyrenees-set Altriman in our iron analysis…

“I toed the line at Altriman in 2012 as a pretty experienced long-distance athlete. But at Altriman I spent nearly twice the time on the bike than I did at Challenge Roth,  said Christophe Fernandez, multiple Altriman finisher.

“Nothing prepares you to spend 10hrs on the saddle and to tackle those 5,000m of climbing on this continuous up and down loop. On the marathon, I was on my knees at the start of the first gradient (yes, the run is hilly too). My race was over… I came back in 2013 for this unfinished business and, after 15:19hrs of battle, I finally grabbed the finisher fleece of which I’m so proud!” 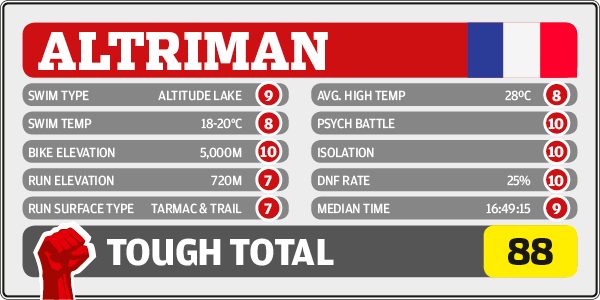 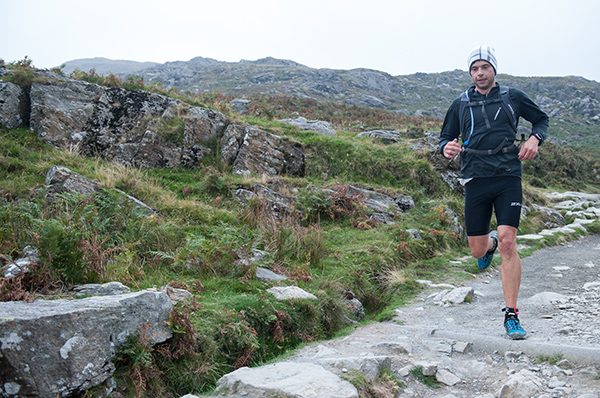 Extremely cruel or harsh. Very bad or unpleasant. Harsh, burdensome, cruel, excruciating, grim, hard, rugged. The Merriam-Webster dictionary pulls no punches in its definition of ‘Brutal’ and its synonyms. And neither do the Brutal race organisers…

Launched in 2012 by ultra athlete Claire Smith, the Brutal is known for its low-key feel and friendliness. And yet there’s nothing welcoming about the course, which submerges athletes in the chilly Lake Padarn for 3.8km before subjecting them to over 3,000m of climbing on the 180km Snowdonian bike leg. The 1,394m of climbing on the run keeps the pain a coming, and all of this without a support crew, with athletes isolated throughout.

“The results say it all,” says the Lincolnshire Iron legend Anthony Gerundini who’s raced 108 Ironmans. “The Brutal winner’s time in 2015 was 12:22hrs with no support, 30mins slower than the Celtman’s supported winner. The full 3.8km swim has the potential to be damn cold and choppy, the bike stats tell you how hard it is and the run throws everything at you. Quite simply, it’s a true extreme triathlon.” 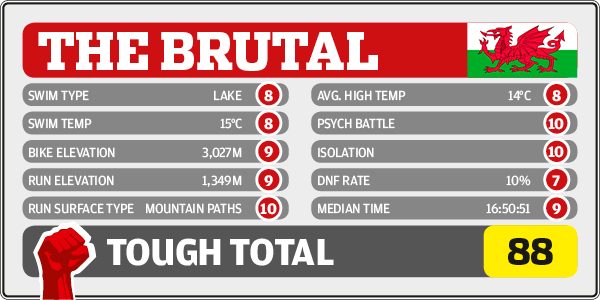 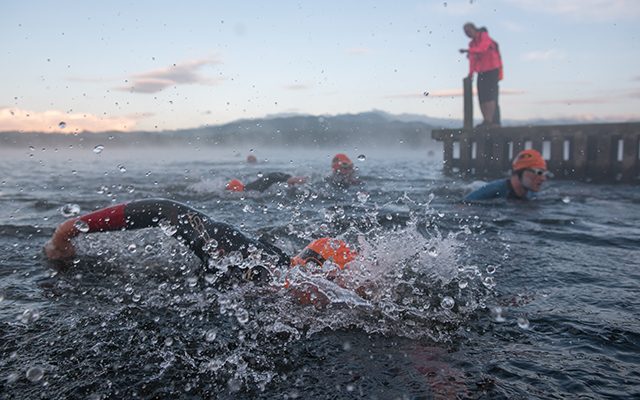 And the winner is… TriathlonX in the Lake District. A bike route on the legendary Fred Whitton cyclosportive route and a run up Scafell Pike and down again makes the new-entry TriathlonX the world’s toughest 226km triathlon.

“The bike is based on the infamous Fred Whitton cyclosportive route, the hilly granddaddy of all classic bike rides that happens to be 180km long. So it’s been an obvious long-held dream to have it as the showpiece of an iron-distance race,” said Anthony Gerundini, 10th 2016 and 120+ time Iron finisher.

“The route takes in the iconic passes of the Lake District, including Wrynose and Hardknott, the cherry on this hilly cake. And it further spices up the route to include ‘The Struggle’ at Kirkstone Pass, familiar to anyone who’s done Helvellyn Tri, and the tough 25% gradient of the Honister Pass. The run then takes in the ascents through Mickelden, Rossett Ghyll and Esk Hause before the rock fields of Great End and Broad Crag. And then the challenge of England’s highest mountain, Scafell Pike, and back down again.” 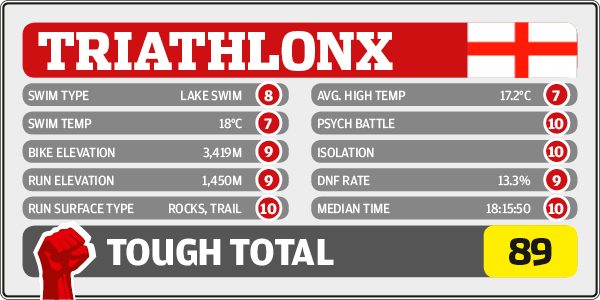 Are these the 7 hardest triathlons in the world?

How to predict your Ironman time