Thinking of joining your local club run? You’re not alone – the ITU’s decision to relax its ban on age-groupers drafting during the bike leg of some races could have big implications for how UK triathletes train and race.

Granted, at ITU level it will only apply to the World Sprint Champs and World Duathlon Champs next year, but a number of event organisers in Blighty are thinking of following suit by running some draft-legal races. And weekend club runs will almost certainly attract a few triathletes too. 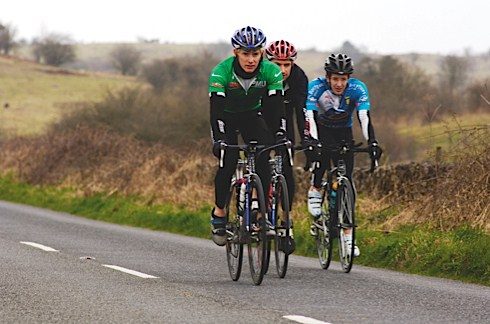 “Group riding is a skill that every road cyclist – not just triathletes – should make time to get to grips with,” says Rob Spedding, Editor-in-chief of Cycling Plus, the UK’s biggest road cycling magazine (and sister title of 220). “I guess there’s a certain snobbishness among seasoned roadies about the pack riding abilities of triathletes, but I’ve ridden in a number of events where the group skills of riders, regardless of whether they’re multi-sportists or pure cyclists, could have been way better.

“The key is to practice riding with other people before you hit an event. At the very least get a bunch of mates together and head out for nice easy ride, taking it in turns to lead, getting used to riding two abreast and following wheels closely. Joining a cycling club’s group ride is a great idea too – here you’ll find experienced riders who’ll be able to give you guidance on the etiquette and, importantly, the mysterious hand signals cyclists use!”

Ah yes, those hand signals – there’s a good explainer here. Once you’re ready to start using them, many tri clubs organise weekend group runs, or you could join a local cycling club (see www.britishcycling.org). If you’re new to group riding, though, make sure you’re aware of the following do’s and don’ts…

The single most important factor to successful group riding is communication. Make sure you know the meaning of – and always pass on – any verbal signals through the group.

There are a number of hand signals you should also be aware of and these must also be passed through the group.

Be aware of the people around you and that your movements will affect the entire group. For example, if you get out of the saddle on a climb, your back wheel will typically drop back six inches.

Pedal continuously at a pace and cadence consistent with the riders ahead, and when it’s your turn on the front try to maintain the pace of the group. It takes time to get used to but consistent riding is vital. 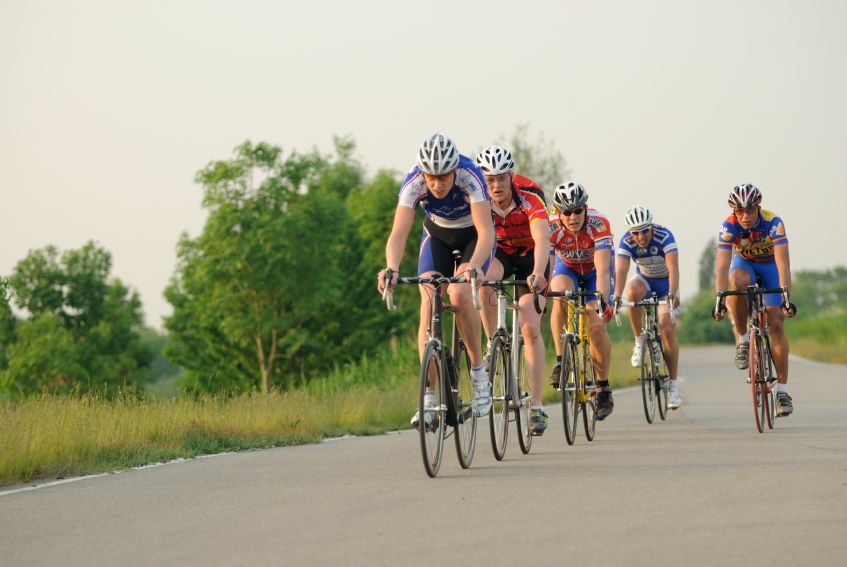 Riding in a group should be a pleasure, not a stressful experience. If you’re tense, you’re more likely to make a mistake.

Listen, ask and be honest

Talk to people and take on board what they tell you. Don’t be afraid to ask questions – everyone was a novice once. If you’ve any doubts about your fitness or handling skills, always opt for a slower group.

You’ll only get the slipstream effect if you’re tucked right in behind the rider in front. Leave too big a gap and you’re short-changing yourself and the riders behind you.

If you’re nervous about clipping the wheel in front, ride six inches either side of it but take care not to overlap. Don’t spend the whole time staring at the rear tyre of the rider ahead – you must look up every now and then.

Ensure your bike is well maintained and that you have a multitool, pump, tyre levers and spare inner tubes. Make sure you’ve enough food and drink for the length of ride planned and suitable clothing for any changes of weather.

Also, if you don’t know the area, carry a map – 99.9% of clubs have a policy of not abandoning people but if you lose the group for whatever reason, you should be able to find your own way home.

On wet and muddy roads, sitting behind someone without mudguards is no fun and, for winter club runs, mudguards are often mandatory.

With relatively cheap, lightweight and easy to fit products such as Crud Roadracers around, there really is no excuse. Get it sorted! 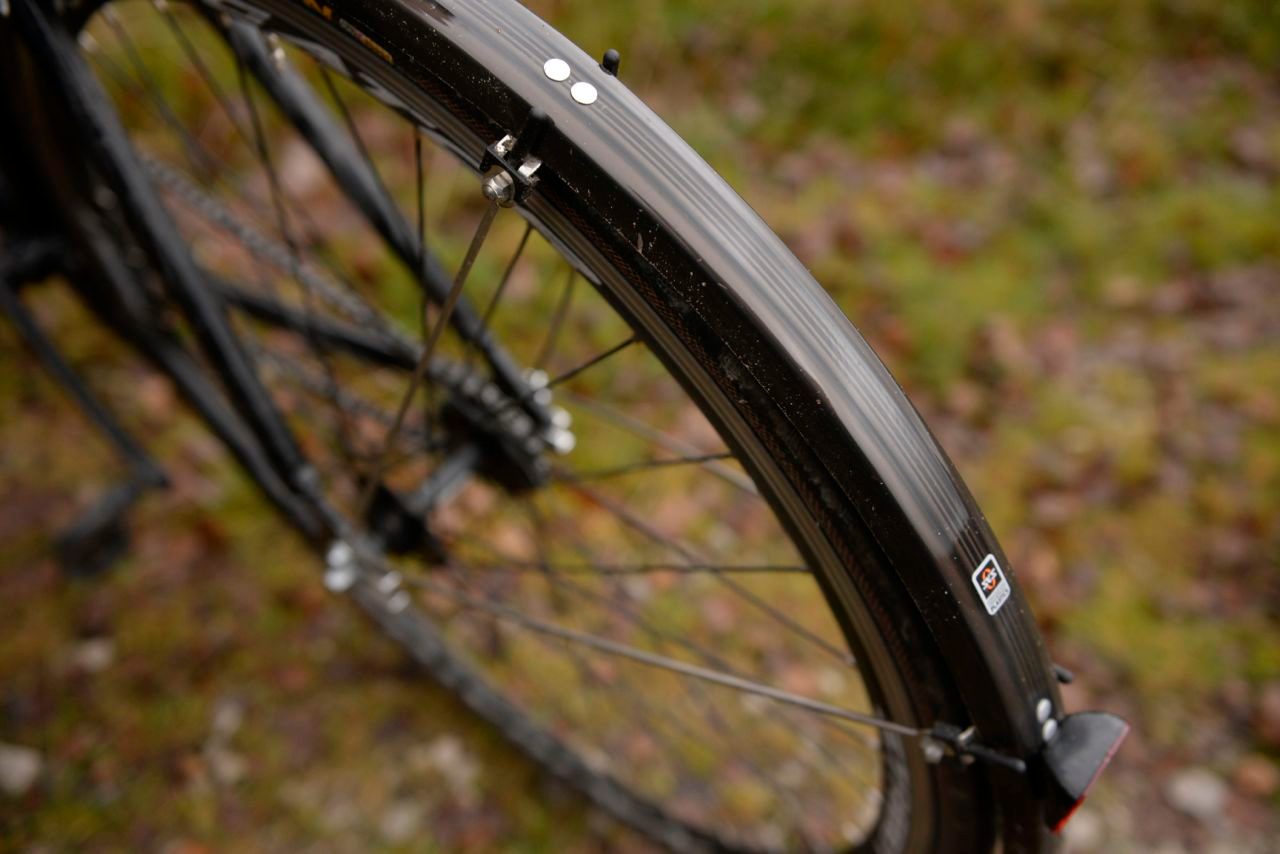 Take off your aerobars

Nothing is guaranteed more to raise eyebrows, elicit tuts of displeasure and set you off on the wrong foot with a group of cyclists than turning up for a group ride with your aerobars on. You won’t be using them in a group, so do yourself a favour and take them off.

When riding in a group, you’re responsible for the safety of everyone and not just yourself. Concentrate on what’s going on around you and the road ahead.

Be ‘grabby’ on your brakes

A good group rider will barely need to touch their brakes and hopefully those ahead will be the same. Changes of speed, either braking or speeding up, should be gradual. If the road ahead looks clear, ride with your hands on the tops.

If road conditions and traffic allows, you’ll generally be riding two abreast. Maintain an even pace and stay level with the person next to you.

Don’t constantly up the pace whenever a rider draws level to you. This is very bad form and is guaranteed to draw lots of disapproving looks and comments. 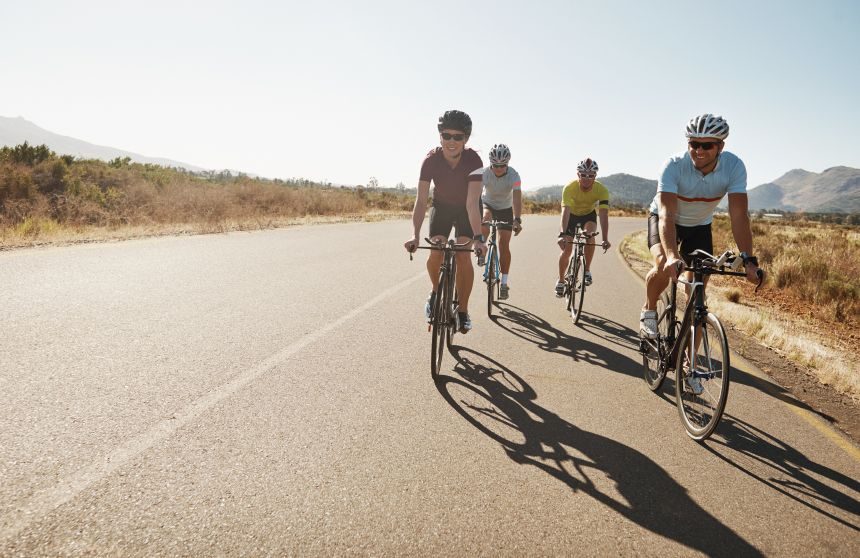 Don’t always sit among the wheels and shirk your stint on the front. Even if you just put in a few turns of the pedals it’ll be noted and appreciated.

But, even if you’re finding the pace easy, don’t get on the front and put the hammer down. Chances are you’ll look back to find nobody has followed you and you’ll hear mirth about the “typical triathlete”.

What are your top tips for riding in a group? Let us know in the comments below!