Fernando Alarza captured his first World Triathlon Series victory in Cape Town today, with pre-race favourite Mario Mola of Spain, looking to claim a 3rd straight WTS victory, unable to catch up after failing to get in the lead bike group.

With Alistair Brownlee sitting out due to illness, it was down to brother Jonny to lead the British contingent. Fellow Brit Adam Bowden was also racing, looking to impress selectors with an outside chance of gaining a place on the GB Olympic team. Richard Murray was also missing with an injury, as was Javier Gomez – otherwise it was a stacked field, with Mario Mola being the one to beat due to his blistering run speed.

Off the pontoon in the sprint-distance race it was one long line for the duration of the 750m swim, with almost no breaks whatsoever in the 64-strong field. It was business as usual for super-swimmer Richard Varga (SVK), who exited the water in 8mins 54secs, followed closely by Henri Schoeman (RSA) and Jonny Brownlee.

Mario Mola came out of the swim almost 30 secs down, and found himself in the chase group on the bike. The front pack included all those tipped for potential podium places barring Mola, with Brownlee pushing the pace early on. The chase group never managed to claw back more than 6 secs over the whole 20km bike leg, and it was Brownlee, Fernando Alarza (ESP), Dorian Coninx (FRA) and Shoeman who came into T2 first. 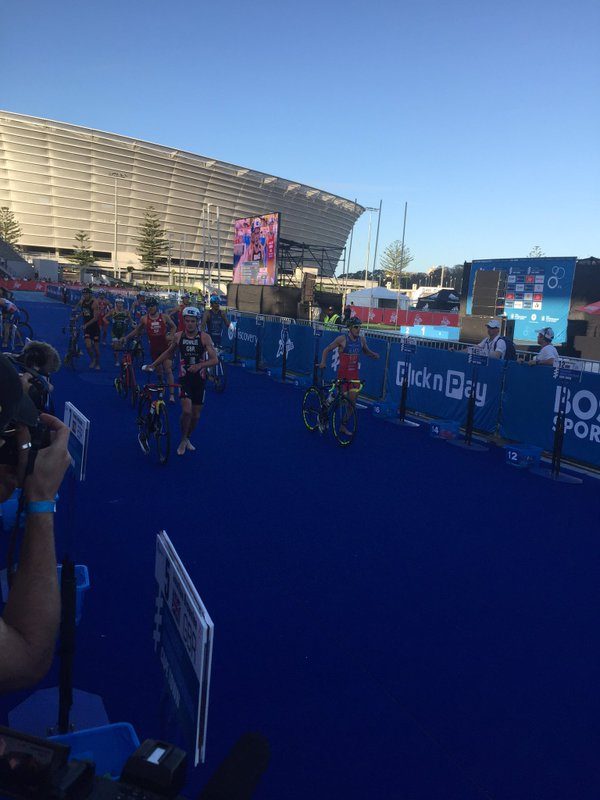 The front group slimmed down to three after the first 1km of the run, with Brownlee, Alarza and Coninx breaking away. After 3km it was looking like Mola had left himself too much to do, 20secs back from the leaders but running blisteringly fast and under 14min pace for 5km.

With under 1km to go Coninx finally dropped off the pace and Alarza put the hammer down on Brownlee, and continued all the way to hold on a massive first WTS victory, surely securing a spot on Spain’s Olympic team. Mola finished in 4th, putting in the fastest run split of the day (14:24) but ultimately unable to secure a place on the podium. Adam Bowden put in a solid performance to finish in 16th place, with an impressive sub 15min 5km run.

Speaking to ITU Triathlon, Jonny Brownlee commented: “I’ve felt pretty bad after what happened at Gold Coast, I’m just happy not to finish on a stretcher! But from where I was two weeks ago it’s a decent result, I worked really hard on the bike and hopefully I can turn it round in the races leading up to the Olympics.”

Alarza said: “I’m really happy today, I think now I’ve finally earned my spot for Rio and I can concentrate on training hard for that now.”

What did you think of the race? Let us know in the comments!