Britain’s top triathletes take on an F1 driver in the GSK performance lab ahead of this weekend's Singapore GP – with some impressive results...

It’s no secret that F1 driver Jenson Button loves racing (and organising) triathlons in his spare time, so the people at GSK’s Human Performance Lab in west London invited him along for a series of triathlon and F1 tests to see how he performed against Britain’s most famous triathletes, the Brownlee brothers.

The three pro athletes went head-to-head in a series of swimming, cycling and cognition tests under strict lab conditions, as well as skin and core temperature tests to assess how their bodies perform in the heat and humidity Jenson is likely to experience in the Singapore GP this weekend (35˚C and 70% relative humidity).

In terms of swimming efficiency, the F1 ace has an efficient technique – but Alistair was the clear winner in this test, swimming further and faster with each stroke. “I love the challenge, but Alistair and Jonny are on a different level,” said Jenson. “Going head-to-head against two of Britain’s greatest Olympians has been an amazing experience. You have to be very fit to cope with the physical demands of F1, but these guys were incredible in the pool and on the bike when we took the tests.”

In the cycling efficiency test in heat and humidity, Jenson’s core temperature was lower than Jonny’s, even though he was working harder to sustain lower speeds – which could be attributed to the fact that he is very efficient at managing his body heat at this level when racing a McLaren Mercedes F1 car. 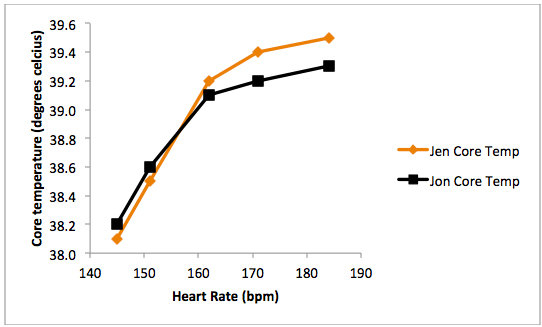 Jonny said afterwards: “Jenson is a really good triathlete, he was particularly good in the heat and humidity in the enviro chamber. When we started the tests on the bikes he seemed to cope far better than I did in the heat.”

We recently sent 220’s very own Tim Heming to the GSK Human Performance Lab to take on three elite triathletes including 2013 WTS champion Non Stanford – see how he got on here.

220 vs. The Elites at GSK’s Human Performance Lab