Victoria Pendleton is one of Great Britain’s most successful and admired cyclists.

Invest in some good kit

In the winter especially, a good windproof jacket that fits well can make a big difference, as your not going to enjoy your ride if you feel cold or uncomfortable from having poor fitting kit.

In my career probably one of the biggest things that changed was the improvement in technology with kit, it actually works now and does either keep you cool or warm. My mum actually used to make my cycling shorts for me as they didn’t make them in the right size at the time for teenage girls, and I used to borrow my dad’s woolly socks and pull them up over my knees!

Rope your pals in

Cycling is a social sport, obviously if you need to do a specific effort then you sometimes have to go it alone, but going out with a group of pals or getting involved with a cycling club can make all the difference.

You’ll improve your bike handling skills and you won’t get bored, plus it’s great to ride with people who are better than you –even if you can’t sit at the front you can go in the slipstream and just get a bit more out of yourself that you would on your own.

When you bonk it’s horrible!

It’s so important that you’re prepared nutritionally for the distance you’re riding, and a lot of people wait too long before they eat which can make the end of your ride unpleasant. When you hit the wall it is horrible, a can of coke and a chocolate bar from the service station will get you home but it’s not ideal, so it’s essential to prepare some snacks before you go out.

Having a strategy and planning is important, so making your own snacks or even preparing what you would eat in a race is always useful, because you shouldn’t try anything new for the first time when you’re racing. And keep an eye on your watch or computer, so you know when you need to eat or drink something according to what strategy you’ve set out for yourself.

Being disciplined and remembering to take on fuel at scheduled times will make your training so much more enjoyable and manageable – if you’re uncomfortable and hit a wall it’s hideous!

…when you start cycle training it takes around 12 months to actually get proper enjoyment out of it. That first 12 months is a bit of a battle because you’re still learning the sport and building your skills. But when you get there it’s so great, you’re comfortable with the distances and the pace you’re doing and have that feeling of flying along, that’s when it becomes absolutely addictive!

It sounds a bit strange to start a sport knowing full well that it’s going to be hard and you will hate it sometimes, but you just have to strive towards that feeling of floating along, and you’ll never want to give up then!

My experience of seeing people out on the roads…

…has changed dramatically since I started training at the elite level, I think I see ten times as many people out training on the roads at the weekend nowadays – and lots of ladies as well! I remember when I used to go out with my dad it was a really special day if I saw another woman out cycling, I’d point it out and be totally surprised!

I had to race with the boys because there wasn’t enough women to create our own races. When I started out on the GB sprint team I was one of the only women, now it’s pretty much a 50/50 split which is awesome. 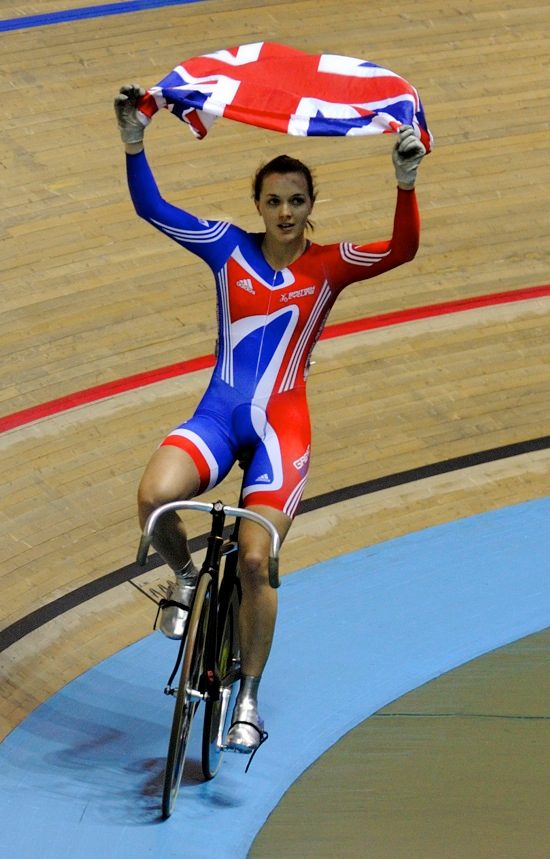 …obviously on the roads the success of Bradley Wiggins and Chris Froome has really helped get people into road cycling. Training facilities and cycling provisions are improving, and the more that improves the better.

I think people are generally more tolerant of cycling nowadays – if you’ve never been on a bike and experienced a lorry coming past giving you three inches it’s hard to understand how that feels, so obviously the fact more people are cycling now has meant that isn’t such a regular occurrence, though I’d still like to see cyclists have even more respect on the roads.

Seeing your progress is key to improving

I always loved my training and I loved the repetition, because I knew exactly my reason for doing it. I never lacked motivation and I loved charting progress and seeing my peak speeds going up week by week, that was what I lived for!

Obviously sometimes you plateau or overtrain, but keeping track of your overall improvement should keep you going. Rewarding yourself is important as well, if you can get round a cycle route a minute faster than you could a couple of months ago then sit back and take that in, think about where you started from and how far you’ve come!

There are so many cynical people out there who live in their comfortable world and never properly challenge themselves – if you don’t try these things, whether it be an Ironman race or whatever you might always wander what you could have been capable of. It’s easy to be stuck in your comfort zone doing sweet FA, so I have respect for anyone who goes out and does these things, whether they win, lose or fail!

I’m not involved in British Cycling any more

I’m concentrating on my new passion at the moment which is horse riding, and it still feels too early for me to go back into cycling in any capacity. I am doing a corporate coaching course at the moment, but I could see myself in a role as a more holistic, lifestyle coach type thing – I don’t think I’d be the best person for shouting at athletes at the side of the velodrome, I’d definitely have more skills in a mentoring role!

My swimming is terrible

My Australian husband had a look at me swimming once and didn’t know where to start, he said it looks like my legs are peddling underwater! For that reason I don’t think I’ll be doing a triathlon any time soon, but I did run in a triathlon relay team last year so I think a duathlon might be an option for the future!

On making sushi (we went slightly off topic…)

You have to rinse the rice at least three times, then put exactly the right amount of water in to cook it. And get really good quality sushi rice, this is important. You put a small amount of water in and jiggle it around a bit then rinse it again, then keep doing that in little steps and add your seasoning and filling after, lovely!

There is also a contraption you can get called a Sushezi which does it all for you, you just wack everything in and out comes sushi so it’s a Sushezi! I do like making sushi… Anyway where were we?

Victoria Pendleton CBE is Britain’s most successful female Olympian, winning 2 gold and 1 silver medals over two Olympics. She also won 9 world titles and was European and Commonwealth champion during her career.

Victoria has recently set her sights on becoming a jump jockey, and is aiming to gain a Category A amateur licence to ride at the 2016 Cheltenham Festival by qualifying for the Foxhunter Chase.

Victoria’s ‘Pendleton’ range of bikes and accessories are available exclusively at Halfords.

The Sushezi is priced from £19.95, available at a very limited number of online retailers!