Everyone knows about Alistair Brownlee, the 23-year-old who’s twice been crowned ITU World Champion and looks a good bet for gold at London 2012. But what a lot of people don’t know is that Alistair has slept his way to the top.

For every night when he goes to bed he clambers into a hypoxic tent – a large plastic chamber, complete with generator and pump, which simulates the low-oxygen conditions found at high altitude. So while the rest of us snore at sea level, Alistair sleeps at around 3,000m in an attempt to wrench yet more improvement from his already freakish physiology. “Unfortunately there’s no altitude in Yorkshire,” he tells 220. “If there was, it would be freezing all year round. So I use the tent for convenience.”

And he’s not alone. Eager to give himself the best chance this summer, Alistair’s younger brother Jonny, 21, has also taken delivery of an altitude tent. “I’ll start using it properly in March to prepare for the season and specifically my first two races, San Diego and Madrid,” he says. In fact, countless elite endurance athletes use similar contraptions and even more head to mountain resorts for high-altitude training camps, including the British Triathlon squad, many of whom travel to St Moritz in the Swiss Alps at the end of June as part of their final preparations for the Olympics.

So why are all these top triathletes so keen to get high? The answer is that they’re all eager to reap the well-established physiological rewards of altitude exposure, to achieve the same bodily alchemy that helps explain the dominance of distance runners from Africa’s Rift Valley, who’ve lived their entire lives on the roof of the world. It might give them that critical edge, so it’s a key part of their preparations. “Altitude training is one of the most important strategies that an endurance athlete can use,” says Dr Jamie Pringle, physiologist at the English Institute of Sport (EIS), who works with the British Triathlon team on altitude training. “It might only be a 5% gain, but it’s a gain you’re unlikely to get anywhere else.”

The basic physiology of altitude training is simple. The higher you go in the atmosphere, the less oxygen there is in the air. Live in that rarefied air for several weeks and the body adapts in several ways. For the endurance athlete, the most important adaptation is the increased release of the hormone erythropoietin (EPO) from the kidneys, which encourages the bone marrow to produce a higher concentration of red blood cells. Since it’s the job of those cells to carry oxygen around the body, an increase in their ranks means your blood can deliver more oxygen to the muscles.

In short, then, altitude exposure can supercharge aerobic power by increasing the ability of the circulatory system to transport oxygen to the muscles. That means greater VO2 max, the key measure for endurance athletes, which should enhance performance at sea level. That’s the theory – and there’s a wealth of evidence to suggest that it works.

“Judging from what I’ve seen and experienced, there’s no doubt that there are definite gains to be had by coming up to altitude,” says Dave Scott, the six-time Ironman world champion who now runs altitude training camps at his base in Boulder, Colorado, and elsewhere. But it’s not as simple as driving up a mountain and working up a sweat. You have to get the timings right. Studies have established that 28 days at altitude is required for a large increase in red blood cell count, with a daily exposure of 22 hours needed for optimal results. The level of elevation is equally important. “Somewhere between 1,900 and 2,400m seems to be the optimum height,” adds Scott. “Below that, they don’t get the stimulus. Above that and it becomes too demanding.”

Indeed, even at the optimum height, many athletes find it extremely difficult to reach the same level of training intensity in the mountains. They simply can’t draw in enough oxygen. “When they start doing exercise that has an anaerobic component, working on that high end, they find that the suffer quotient is higher,” says Scott. He himself learned the hard way – by training at altitude in the run-up to his first comeback, at the age of 40, when he claimed an impressive second at Ironman Hawaii in 1994. “A lot of athletes will say it’s too hard to generate the power and speed when at altitude.” That can result in ‘detraining’; by the time they come down to sea level to compete, their fitness has actually deteriorated. Some athletes even lose lean muscle mass.

This is perhaps more of a risk for a 1,500m runner or a track pursuit cyclist – where the athletes’ training programme includes a large amount of very high-intensity maximum effort – than for a triathlete. Even so, it’s largely for those reasons that another approach has gathered momentum. With the ‘live high, train low’ method, athletes sleep and spend most of their days at altitude for the purposes of adaptation, but drop down the mountain for high-intensity training sessions. In that scenario, they get the physiological benefits of exposure without hindering their ability to train hard. According to a rigorously controlled study published in the Journal of Applied Physiology in 1997, this appears to be the most effective approach.

Researchers divided 39 athletes into three groups. One group lived and trained at sea level, another did the same at altitude (2,500m), and the final group lived at altitude but trained at 1,200m. All undertook exactly the same training programme for four weeks. They found that both groups living at altitude achieved an increased red blood cell count (around 9% on average) and VO2 max (around 5%). But the last group – the ‘live high, train low’ group – achieved the most improvement in a 5,000m time trial.

“The athletes in the high/low group improved their performance by 1-2%,” says Dr Ben Levine, Distinguished Professor of Exercise Science at the University of Texas Southwestern in Dallas, and co-lead author of the study. “In the 5,000m, that’s the difference between winning gold and not even qualifying for the final.” For Levine, the most likely explanation is that the high/low group were able to train at higher intensity than those training at altitude. “It seems as if they were better able to preserve their skeletal muscular function and their oxygen uptake during high-intensity exercise, so they could better utilise the enhanced oxygen carrying capacity of their blood.”

The problem is that living at high altitude and heading down to train three or four times a week is logistically difficult. Thankfully, there are other ways to get the same effect. At the US Olympic Training Centre in Colorado Springs, for example, athletes can use an oxygen mask for high-intensity training at altitude. The most popular solution, however, is to sleep in an altitude tent. Simulating heights of up to 3,800m, these allow athletes to nod off at any elevation without even leaving home. Provided they get enough exposure, they should get the same boost in red blood cells.

Again, though, that’s not always easy. “As long as you live high enough for long enough, you’ll get the same effect,” says Levine. “Several separate studies have shown that if you live in simulated altitude for a minimum of about 12 hours a day, and you do that for four weeks, you can get noticeable changes in red cell count.” 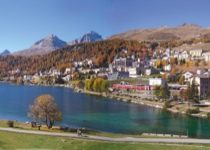 Nestled in the beautiful Engadine Valley, among the snow-dusted high peaks of the Swiss Alps, the ski resort of St Moritz is as close to an altitude-training paradise as you can get. Even with the demands of an elite triathlon squad, it ticks all the boxes.

Located at a height of around 1,865m, it boasts close to the ideal elevation for physiological gains and there are plenty of options to go higher. With an annual average of 322 days of sunshine, you can even rely on good weather.

As the proud host of two Winter Olympics, the town also boasts an impressive range of facilities. A 400m running track in the town centre is complemented by endless trails among forested slopes, as well as flat gravel tracks alongside three large lakes. With a population of just 5,600, the smooth roads that surround the town remain mercifully clear for bike rides and there are more than enough lung-busting climbs. There’s also a 25m indoor pool in the nearby spa village of Pontresina.

Throw in some extremely posh hotels and restaurants and it’s easy to see why the brothers Brownlee and their coaches will rock up here toward the end of June – between ITU World Series races in Kitzbuhel and Hamburg – as an essential part of their preparations for London 2012.

Can Ali Brownlee go sub-7 hours over an Iron-distance?

Time to sheikh up the winter training?