At the age of 57, most people like to take an easy approach to life, be social and not be involved in anything too strenuous. Diane Sandover, isn’t one of this people.

After completing four Ironmans in five years she is giving something back by helping run her local triathlon club. Leighton Buzzard Triathlon Club in Bedfordshire only started 18 months ago and Diane has been there right from the very start:

“I saw an advert in the local paper in August 2011 asking if anybody was interested in setting up a triathlon club in Leighton Buzzard, it was the right time for me.

“I had just finished my fourth Ironman triathlon in as many years and I was looking for an excuse to cut back on the training and give something back. We aim to offer a friendly and welcoming environment for both novice triathletes and duathletes and seasoned competitors.”

Sandover was encouraged into the sport by her son who had previously competed in triathlons to start training as well:

“I participated in my first triathlon in 2002, encouraged by my son who had already done a couple of triathlons and wanted to offload his old bike on to someone, so that he could buy a ‘proper’ tri bike.

“I used to go swimming once a week and jog around the block occasionally but hadn’t been on a bike for years.”

At the club, Diane is known as ‘IronGran’ for her success in completing the tough event. And, although she isn’t looking to compete in another Ironman, she regularly competes in half marathons and retained her Dirt Half Marathon age-group title in November 2012.

Sanderson has had no thoughts about hanging up her trainers either as she wants to compete and train until she is 80:

“I would love to still be running and swimming when I get to 80 (I’m only 57 now) but I have no intention of retiring from competing. I might not be as quick as I was but I certainly feel fit and healthy and to me that’s very important.” 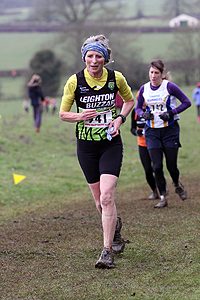 Diane is supported by her husband or ‘back up’ team when she competes in her events. When asked about her husband’s involvement, Diane says: “He supports me at triathlons and I support him at CAMRA beer festivals.” Which seems a fair swap?

After seeing her son complete his first Ironman in 2006 in Austria, there was only one thing on Diane’s mind. Much to her husband’s disagreement she returned to the country two years later in 2008 at the age of 52:

“In 2011 I completed my fourth, although I am now more Irongran than Ironman.”

With the Olympics as a catalyst, Irongran is helping Leighton Buzzard’s triathletes train for the upcoming GB qualifiers for September’s Age Group Triathlon World Championships in Hyde Park.

22-year-old Alex Fry, who will be going for in the Sprint Distance in the summer said:

“IronGran is a wonderful lady; she’s so welcoming to everyone who joins the club. At the Olympic distance Club Championships her run splits were faster than me which shows just our great the woman is.”

Alex and many others are benefitting from Diane’s experience and knowledge about the sport and she is thoroughly enjoying being involved:

“As a club we take great pleasure in seeing the progress people have made after only a few weeks of joining us and benefitting from our Thursday evening training sessions.

“Triathlon is a wonderful sport for those of us who will never win but do it just for the fun and camaraderie and, yes, being fit.  And if I can do it, anyone can!”

Diane is currently helping to organise an event run by the club to take place in July this year. The club will hold an Aquathlon on the 20th July at Tiddenfoot Leisure Centre, Leighton Buzzard.

This will be the club’s first event and Diane is quite excited about the prospect:

“It will be our first event, so we are all very nervous about it but with the expertise and help of all involved we know that it will be a great occasion.

“This event is open to anyone who has ever wanted to try a multi-sport event but has never had the opportunity or the courage.  All ages will be welcome, from 11 years old and upwards; so mums, dads and children can all have a go.”

Further details and application forms will be available on the club website soon at www.lbtri.org.uk.

Or if you are interested in joining the club and are in the local area, you can contact Diane via email on secretary@lbtri.org.uk.