The next generation of triathletes arrived at Eton Dorney in Buckinghamshire last weekend for the SuperTri Children’s, Youth and Junior Triathlon, with around 1,200 youngsters taking part.

The races kicked off on a sunny day with the LittleLife Scootathlon for children aged 4-8. It began with an anti-clockwise scoot around the 390m course, before swapping to a bike for another 390m lap around the course before a final 250m run finishing under the LittleLife gantry.

Once the kids had shown us how it’s done, it was then the turn of the parents to join in and compete with their kids in the inaugural Parent and Children Scootathlon Relay. Micro Scooter were giving out spot prizes on the day, including some colourful backpacks.

Shortly after the Scootathlons, it was time for this generation’s budding young triathletes to take on the Dorney Lake course. Starting with the high performance drafting waves, we saw some exhilarating races from top young triathletes.

The first waves of the day were the 13 to 14 year olds, who took to the race with ease, storming through the swim and onto the bikes as if it was second nature. Once the competitors took off to swim the challenging 400m, it was evident that this was to be a quick race with the top 10 all exiting the swim within seconds of each other.

As it was very evident this was a strong field, transitions were to be vitally important, and this showed, as eventual winner Zak Wort was ruthlessly efficient in transition, particularly in T2 to claim the top prize. Zak finished the race with a fantastic time of 31:00, however not too far behind him in second was Tom Simpson (Greenwich Tritons), shortly followed by Abel Sinko-Uribe in third (31:22).

In the female race it was to again to be a tight race, with the top five finishing within only 40secs of each other. However the eventual winner of the day was Isabel Atkins (Optima Racing Team) with an impressive time of 34:20mins. Isobel was particularly strong in her run, achieving the fastest time in her whole category, which inevitably pushed her ahead of her competitors Ellie Hobbs (Yate Tri-Stars) and Daisy Davies (Dorset Pentathletes) in second and third respectively.

The last of the high-performance drafting waves of the day were the 15 to 16 year old boys and girls categories. The eventual winner of this category was to be James Chantler-Mayne with an impressive time of 31:38mins, beating Aurel Sinko-Uribe in second place by 30 seconds.

With Chantler-Mayne securing first place, second was a hotly contested affair with Aurel Sinko-Uribe and Gregory Atkins (Optima Racing Team) battling it out for silver. Although Atkins led Sinko-Uribe out of the bike and through T2, Sinko-Uribe pulled it back in the run to beat Atkins by a mere second, which rounded off a great day for the Sinko-Uribe family, with both boys finishing in the top three of their respective categories.

There was to be no such drama in the girls’ wave, however there was still to be some superb racing across the field. Blythe Fourie took the gold medal in the girls’ category after her impressive swim and run times, combined with her rapid transitions, providing the catalyst to trump Sinead Clark (East Essex Tri Club) and Hannah Keating (Optima Racing Team) in second and third, who finished with impressive times of 36:47mins and 37:06mins respectively.

Once the high-performance drafting races had finished, the youngest triathletes of the day began, firstly with the 9-10 year olds subsequently followed by the 8-year-old wave. This was to be a great event as it was some of these kids’ first taste of the triathlon world, and hopefully it has left them with a craving for more.

The fastest competitor in the 9-10 year-olds’ Fun tri was Ruben Snelson of Team Rugby who battled it out with Thomas Dixon (4 Life Triathlon Club) throughout the race for first place, only for Ruben to edge Thomas, only slightly, on the bike course. Not too far behind Thomas in third was Henry Pollock of Beachborough School Triathlon Club who finished with an equally impressive time of 14:29mins. 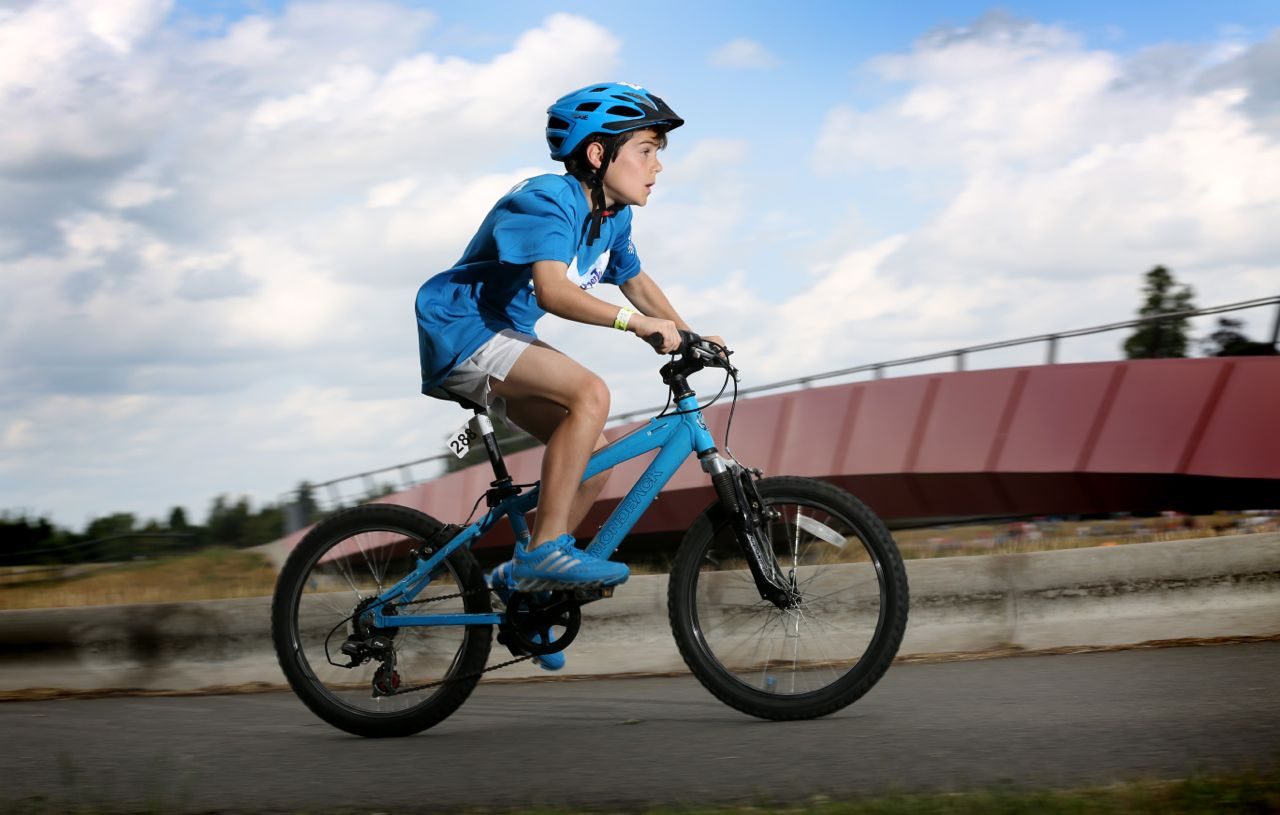 When it came to the girls’ event, we witnessed a dramatic finish which led to all top three competitors coming within 8secs of each other. Cerys Howells (Thames Turbo Triathlon Club) won the race with a time of 15:01mins, however it was second place which was eventually shared by two teammates, Sophie Hamilton and Melissa Eve Copper of Chapel Tri Club, who finished on exactly the same time of 15:09.

Following the 9-10 year old waves was the 8 year-olds’ Fun tri which involved a 100m swim, 1.5km bike and a 600m run. Winning the event with a fantastic time of 11:43mins was William Blount (Chapel Tri Club), who only just beat Kian Hooker to first by a mere 2secs. Shortly following Kian in third was Lauren Mitchell (Medway Tri) finishing with a time of 12:26mins, after a storming run, the quickest by any competitor in that race.

Moving up an age category now to the 11 and 12 year-olds’ triathlon, Ryan Symington (Dorset Pentathletes) took the race by the scruff of its neck by firstly leading the swim out of the water and, with a smooth transition in T1, Ryan led the pack from an early stage. Even though Benjamin Cumberland (Vale Tridents) and Ben Edwards were quickly chasing him down, Ryan won the race with a comfortable 30sec lead over Benjamin in second and Ben in third.

In the girls’ race it was a similar story however it was on the bike course when the eventual winner Ciara Blount (Chapel Tri Club) took control with a speedy time of 10:09mins. This was followed by a swift transition in T2 and Kate Painter (Medway Tri) found her too tough to catch, despite a really impressive run time of 6.47mins, almost a whole minute quicker than winner Ciara Blount. Ella Peters (Jetstream Tri Club) and Freya Batkin took joint third after Ella Peters’s impressive effort in the run to reduce the deficit Freya Batkin had set after an imposing time on the bike course.

With a challenging 300m swim, 10.6km bike and a 2.5km run, we witnessed the 13 to 14 year-olds wave showcasing their triathlete credentials in hotly-contested races in both the boys and girls heats. After a strong start from all competitors in the swim, the bike and run course evened out the pack, showcasing which budding young triathletes just had the edge. The eventual winner of the boys heat was Matthew Howard with a time of 35:52mins, even though Nicholas Sims, in second, led in the swim and was quickest out of transition (T1).

Not too far behind Nicholas in third was Alex Evans (Chapel Tri Club) finishing with an impressive time of 38.07mins. In the girls’ wave Isobel Barnett (Tri Henley) led the race throughout, with a particularly imposing time of 10:51mins in the run, which helped stretch her lead over Gabby Horner (Medway Tri), who finished in an equally impressive time of 39:47mins. Second place was up for grabs throughout the race, however Gabby Horner just edged her rival, Lili-Keau Juntakereket, to second by only 10secs, after a strong transition in T2 and an impressive run to finish.

Our final waves of the day were the 15 to 18 years Youth and Junior Triathlon boys and girls waves, and it was to be a great way to end the day, as there was some spectacular competition on show. In the boys race, there was to be one clear winner in the form of Patrick Livingstone of N1 Tri Club, who finished a whole 2mins ahead of Daniel Pinn (Crystal Palace Triathlon Club) in second place, after blitzing the run in a spectacular time of 8:51mins. Just behind Daniel in third was Jack Shayler, who trailed Daniel by almost a minute in the bike course, only to make up the minute with a great time of 10:03mins in the run, leaving him only 13secs behind Daniel in second.

In the girls’ wave, it was a different story with a relatively split pack, with a clear first, second and third. From the get-go the race was dominated by Lauren Revell (Team Milton Keynes), who stormed out of the swim 30secs ahead of her nearest competitors, followed by a swift transition in T1, and increasing her lead through a strong bike time.

Although Lauren did not record the fastest run time of the wave, she had done enough to secure first place with just over 30secs to spare over second-placed Leanne Symington (Dorset Pentathletes). With Leanne finishing in second with a time of 40:25mins, her nearest competitor was Annabel Morton in third who enjoyed a great run time to propel her further ahead of Jodie Hull (Tri Sport Epping) in fourth, to secure the final podium spot.

Did you race at Eton Dorney last weekend? Let us know in the comments below!

241 at TCR for British Triathlon members