We last met Scott Neyedli in the summer of 2012. The Scottish Ironman star had returned to the day job as an engineer in Aberdeen after five years experiencing the highs (an Ironman UK win in 2007) and the lows (being dropped by the Commerzbank team despite a silver at IM Western Australia).

15 months on and Neyedli has just produced arguably the best year of his racing career. A win at the British Middle Distance Champs was followed by fourth at Ironman UK before the 35-year-old broke the tape at Ironman Wales to record his second full Ironman win. We caught up with him to talk Tenby, training and why he still dreams of breaking Spencer Smith’s Kona record…

220: Has removing the financial concerns of being a pro almost given you a psychological boost to your training and racing?

Psychologically I didn't think it would be possible to win a professional Ironman race without training full time. But I felt with good, smart and optimised training, along with my previous battle-hardened pro race experience, I could still challenge for a podium placing in the domestic Ironman races.

It played on my mind that I’d be giving up recovery time and 10-20 training hours a week to full-time athletes but I recently watched Four Minutes, the Roger Bannister movie, where he achieved the first sub 4min mile around his working medical career while racing many full-time athletes. I took more belief in myself.

Getting paid promptly at the end of each month took away any financial burdens that working athletes can absorb – i.e. being paid in arrears sometimes up to four months for prize purses, absorbing foreign tax or simply not being paid by race directors or sponsors that you had agreed contracts with…

Does the result in Tenby make you tempted to become a pro again?

I am very tempted… with 2,000 points banked towards Kona 2014 already I feel there’s an opportunity. I’ve probably five good years left in me but I’d only go back if I had the right team behind me. I still have the desire to top 10 in Kona and better Spencer Smith’s best Brit top five placing.

With the Kona Points Ranking being what it is, you need a corporate sponsor to allow you to race internationally and accumulate the points needed. Thankfully the criteria will be scrapped next season so the prize purses and points will be a more fair system. 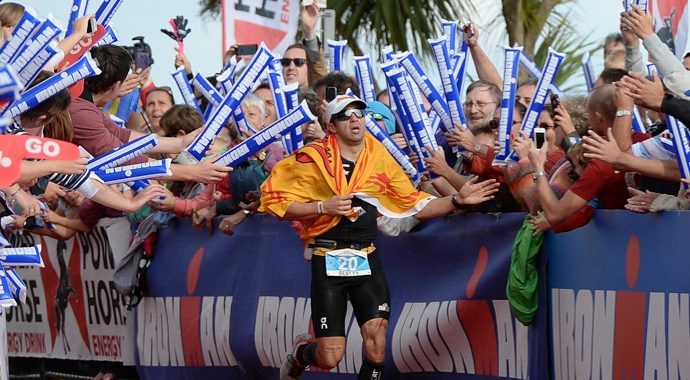 You labelled Tenby as your toughest Ironman.

I’ve raced both Lanzarote and Switzerland previously but the Welsh Ironman was the hardest I’ve seen or done. From a sea swim to probably the hardest T1 transition where you run from the sandy beaches up the zigzags and then a 1km run through the town centre to begin the bike leg. The bike leg is then all undulating with plenty of 12-16% hill climbs that you repeat twice through the back end of the course.

The marathon is just as tough with an undulating course to the turnaround and then cobble stones as you run through the town centre. The weather wasn’t too favourable either, with all four seasons in one day!

It may paint a picture of a pretty brutal course but you soon forget this when you hear the cheers of encouragement from the local community lining the streets at every village, hill climb and bar you pass. The village town centre was something else and one of the best finish line experiences. It was epic!

Is it now a case of short, intensive training?

A mix… a few of my key endurance sessions are same as before and I’d load these workouts on my weekends, training between 6-8hrs on Saturday and Sunday with more shorter intensity sets placed in the middle of the week. With the long evenings we get in Aberdeen over summer, I was able to build up my training hours to get 3-4hr of training after work doing either double bike or run sessions followed by a swim squad or an intensity bike followed by a brick run.