The Vachery Middle Distance triathlon, held as part of a festival of triathlon in Surrey on the 21st July, promises to be a cracker says Richard Campbell. Here he rides the 90km bike leg…

Held in and around the grounds of the Vachery Estate, racers will begin their day in one of Surrey’s best-kept secrets – Vachery Pond. This private spring-fed lake will play host to the deep-water start of the 1,500m (Standard) and 1,900m (Middle) swims.

After the swim, athletes will head out onto the closed roads of the Surrey Hills, designated an area of outstanding beauty, and take on a rolling course that takes in perfectly surfaced and flat A roads, winding country lanes and an iconic climb over Leith Hill – daunting in the fact it is the highest mound in the South-East. This 90km two-lap affair (Standard athletes will do a single 40km lap) then takes you back to T2 where athletes prepare to tackle the 10km/20km closed roads around the estate for a spectator friendly run.

With a course description such as this, I couldn’t resist an invitation from the organisers to come over and ride a lap of the bike course and see for myself.

Now, I never learn my lesson at these things. I turned up in shirt and trousers just in case there were some formalities to conduct but, as per usual when a couple of tri-hards get together, the dress code was Lycra and cleats. A quick car-park change later, Mark Davis, owner of Brave Events and Race Director for the Vachery Triathlon Festival, and I were clipped in and headed towards what would, in four months’ time, be T1 to try the course out.

As we hit the opening section of the course, we paused to take in the site of Vachery Estate – the site of the open-water lake swim, transition zones and a massive open field that will be the site of the camping facilities and trade show.

“We really want to re-introduce the core values of triathlon back to triathletes and their families,” said Davis. “Big tri events should be held in the great outdoors, the fresh air where families can run around and play as much as the racers.”

As I looked out across the huge estate and enjoyed the views, I couldn’t agree more.

We then went out onto the course again and turned over several miles as Mark explained that the course will be completely closed on race day. The first seven miles pass without incident as we cross picturesque country B roads. There’s nothing to worry racers in this section, just a few gentle undulations and most will be happy getting down in the aero position by now.

Then comes several miles of Roth-like bliss. Flat and open A-roads take you all the way to the bottom of Leith Hill, which sits playfully in the distance hanging over you while you really put your head and legs down, and thrash out a fast section along this aero part of the course.

Come race day this’ll be bliss for riding and racing as the closed A-road feels made for bike racing. As we approach the bottom of Leith Hill, I’m reminded by my guide that it is the highest mound in the south-east and at its peak is taller than the iconic Shard building. 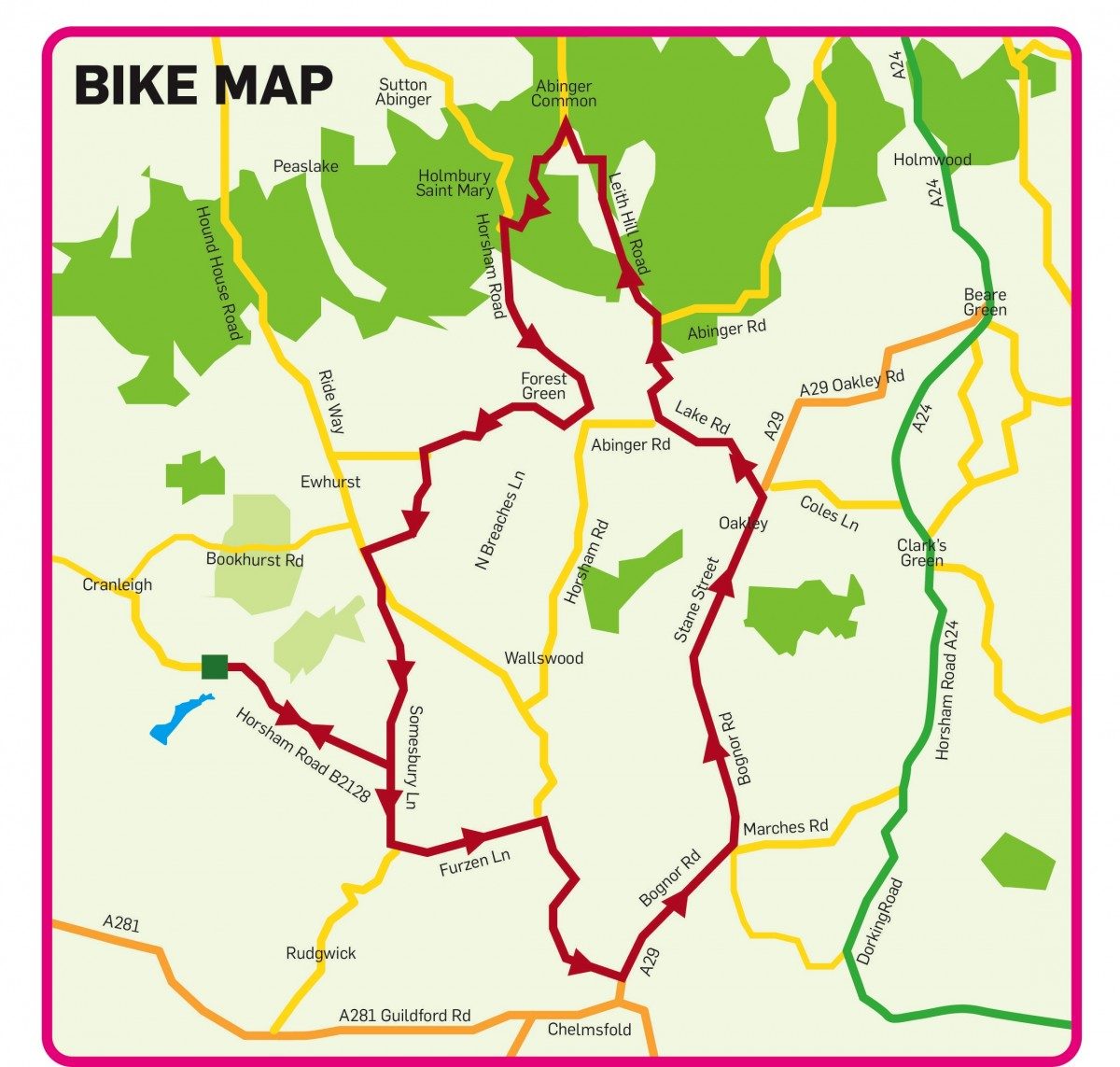 Our climb begins in earnest and it really is a beauty. Each incline is followed by a plateau, which allows the legs and lungs to recover ahead of the next effort. You continue like this, out the saddle, for a mile or two working your way up Leith Hill. On the final climb I was broken, turning the pedals slower than before and simply surviving. Mark continued his climb to the top and sat up, waiting for me there.

“Now comes the fun bit – mostly downhill with a couple of technical descents but you roll all the way back now to the end,” Mark advised.

Head down and it was fun, fun, fun all the way back to what would be T2. My guide was right – barring a couple of tiny but sharp inclines, it really was downhill all the way back. There’s a really enjoyable section a few miles after the hill where you go up-and-down through some country lanes and I was told that that was the part of the course used in the Tour of Britain.

By the time we finished the lap my legs were fresh from the relative recovery of the final five miles and my lungs felt good. If this was race-day I would’ve felt brilliant heading onto the run. This course is the perfect example of why one that goes up, also comes down and can facilitate faster times than a pancake flat course can. I expect to see some furious and fast times come race day on 21 July.

Such is the potential of this race – the setting, its proximity to London, the organisation, the course and the way in which Cranleigh has embraced the Triathlon Festival – I believe that we are looking at the UK’s version of Roth or Wildflower. A race that simply has to be on your bucket list.

Richard Campbell is the editor of Beyond Going Long. 220 is proud to be the media partner of the Vachery Triathlon. Head to www.vacherytriathlon.co.uk for more info.