The fourth installment of the Snowman Triathlon took place over the 26th and 27th September, starting and finishing at the Plas y Brenin National Mountain Centre in Capel Curig, North Wales. Hundreds of competitors descended on this beautiful and iconic part of Snowdonia; however the scenery was the last thing on their minds as they tackled the infamously brutal course, finishing with a run that ends on a mountain summit.

As competitors lined up for the swim they were rewarded with breathtaking views towards the Snowdon horseshoe. The swim in the full distance race was cut from 1000m to 500m due to cold water temperatures.
With the ‘Storm’ sprint distance and ‘Blizzard’ full distance events to choose from competitors set off on either a 69km or 31km cycle, which took in some of the most beautiful roads and climbs in Snowdonia National Park. Upon completing the cycle the athletes were then faced with a challenging but rewarding run to the summit of Moel Siabod and back, finishing at Plas y Brenin.

Up at the front end of the racing in the men’s full distance category, the glory went to Ewan Brown, who has won every edition of the Snowman Triathlon since it’s inception. Brown led for much of the race and seemed comfortable throughout, although the tenacious and highly talented Alex Foster put in a great effort on the run to make sure his race wasn’t made easy. Brown’s win in 3:00:23 ensured he retained his Always Aim High Tri-Series champion status and he did it in style, by winning the other two races in the series, the Slateman and Sandman triathlons.

In the women’s race, Sandman Triathlon winner and the new AAH Tri Series champion Natalie Seymour fended off the rest of the field to romp home in a time of 3:40:41. 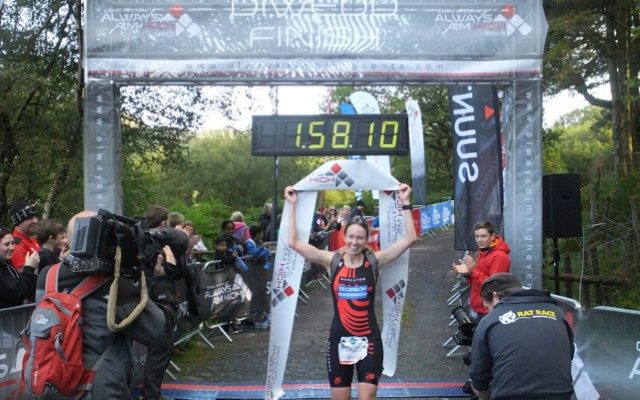 In the sprint race, the promising young athlete Tomos Nesham won the male event in a new course record time of 1:38:59. In the female sprint category, the winner was Helen Talbot in 1:58:11.

Always Aim High also offer an all-expenses-paid trip to the Nevis Triathlon in the Caribbean for the male and female athletes with the fastest accumulative times from their three-race series. The winners were Ewan Brown and Natalie Seymour, who will be jetting off to Nevis for the exotic race in 2016.

Seymour said: “It’s an amazing opportunity to go to Nevis. The views I saw today around Snowdon were incredibly stunning and will be hard to beat but I can’t wait to get out to the Caribbean.”

Event Planner and Always Aim High Event Director Tim Lloyd was delighted with how the Snowman Triathlon weekend had gone:

“This year’s Snowman Triathlon has been by far the best to date. The feedback we have had so far has been incredible and it’s nice to be able to organise an iconic and stunning event that is enjoyed by elite athletes and novices alike. Whats more, the support from the hundreds of spectators all over the course has been great.”