With Tri Liverpool again hosting this year’s British Triathlon Championships and the world’s top-ranked female triathlete Gwen Jorgensen expected, you’ll need to bring your A-game if you’re one of more than 2,000 athletes diving into the Queen’s Dock this Sunday.

Handy then that we’ve recruited last year’s age-group winners Chris Standidge and Parys Edwards to share their advice on getting the most from the course and staying out of trouble. Over to Chris and Parys…

“It looks like the swim and transition have changed from last previous years, with the transition now inside the Echo Arena, and the swim has been altered to accommodate this,” says Chris. 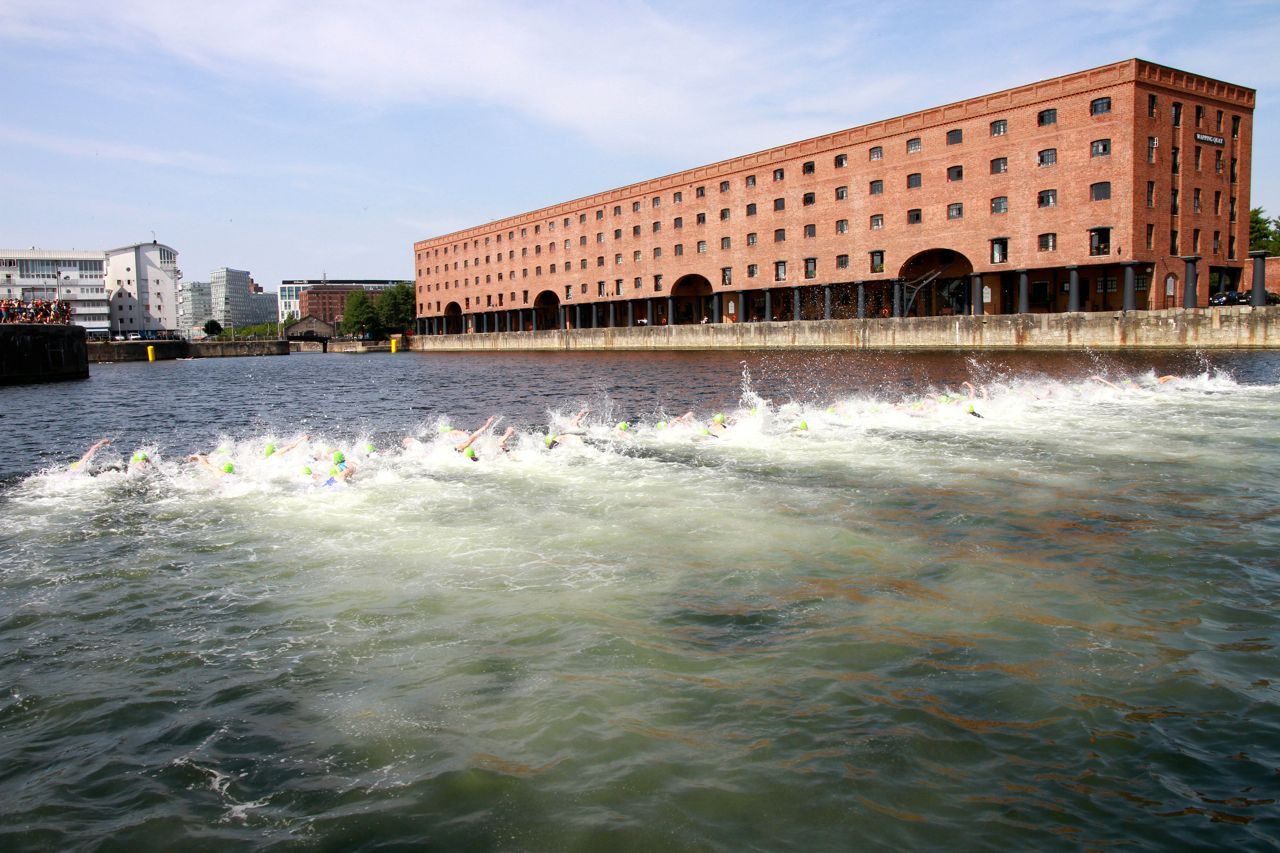 “The swim takes place in Queen’s Dock, close to the famous Albert Dock, and is saltwater which will increase buoyancy slightly. The high walls and protection from the river mean the water is calm, and this generally means fast swim times. With the warm weather we’ve been having, I am not sure if there is a possibility of a non-wetsuit swim. This will definitely favour the stronger swimmers if this happens. You also need to think about what you are wearing – I normally wear a two-piece tri-suit which has pockets in, which is fine under a wetsuit, but causes drag when not wearing one. I would switch to a one-piece tri-suit and leave my race number in transition in a non-wetsuit swim.

“Transitions are normally long at the Liverpool Tri, and this looks no different this year with it being located in the Echo Arena. Should be a spectacular back drop though. It’s important to remember where your bike is racked in such a large transition! Count the number of rows and remember your race number so you find your bike quickly. If you have a long run out before you mount your bike, having your bike shoes already clipped to the pedals will save more time, but more importantly do what you are comfortable doing. Don’t try anything new on race day. 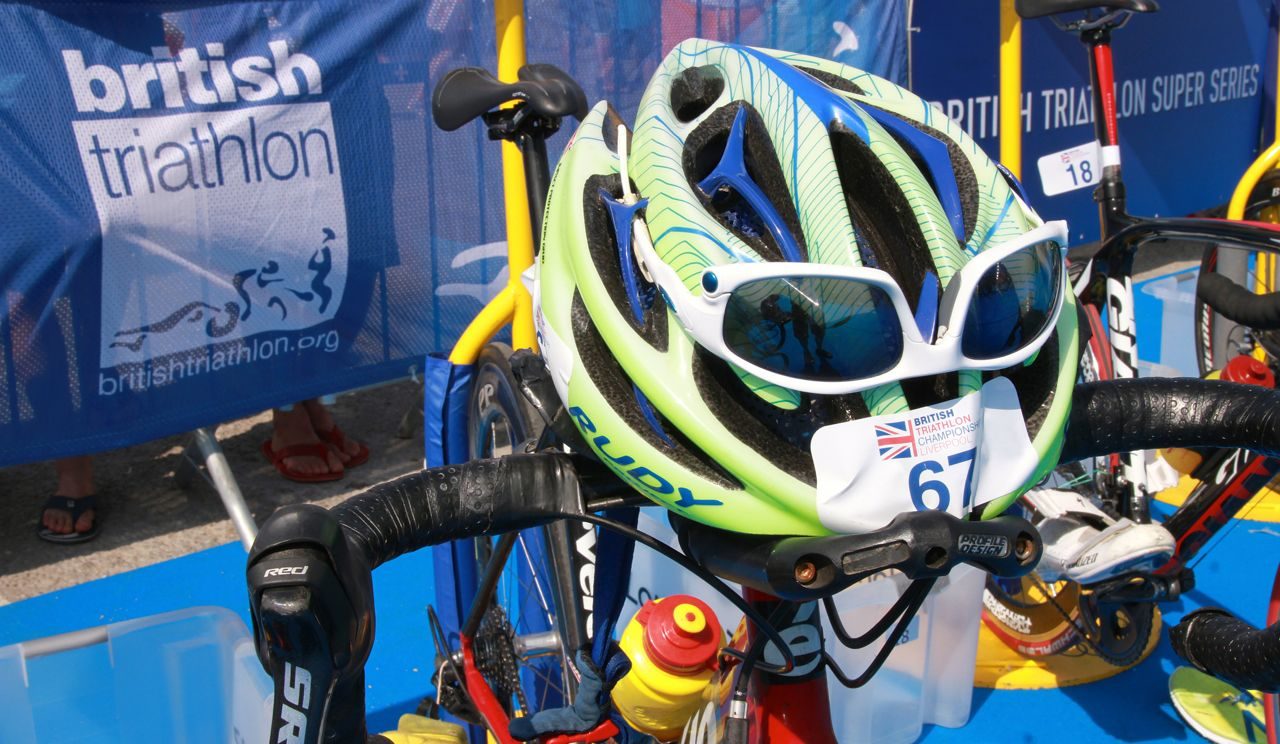 “The bike course is flat and fast over four laps. There are going to be lots of people on the course, all travelling at different speeds, with people getting on to and leaving the course. It’s prone to accidents, so try and give as much distance as you overtake, and stay over to the left so you give room to stronger cyclists coming through. There are dead turns at each end of the course, with groups of cyclists all slowing down to get round, so be extra mindful of who is around you, and if it’s wet then take particular care. On out-and-back courses you will generally get a tailwind in one direction and a headwind in the other. Try to ride stronger into the headwind as this is where you will make up time, a tail wind closes up the speed of everyone. Count your laps and be ready at the end of the four laps to come back into transition….

“The run is also flat and fast, two laps. Ease yourself in over the first mile. Don’t go off too quickly, you can lose a lot of time in the final parts of a triathlon run leg in the last couple of miles with poor pacing. It’s a great course for a personal best, and a fantastic backdrop for racing.”

“The British Champs in Liverpool last year was without doubt my favourite race, and I clocked a PB of 2:04:58 for the Olympic distance, which I hold with great pride,” Parys tells us. “The vibe in Liverpool is amazing, the organisation’s slick and the race itself is fast and definitely a course to target for a PB.

“If you are commuting there from London I highly recommend you take the train from Euston rather then drive. It’s a much quicker journey and less hassle, just remember you have to book your bike (at no extra cost) if you are travelling on a Virgin train, they won’t let you on the train without the bike receipt as some people discovered last year (I made a good friend in Jane Hanson last year as this happened to her and she had to take a later train!). There are plenty of hotels to choose from close to the race start in the Albert Dock and its an easy walk from the train station. 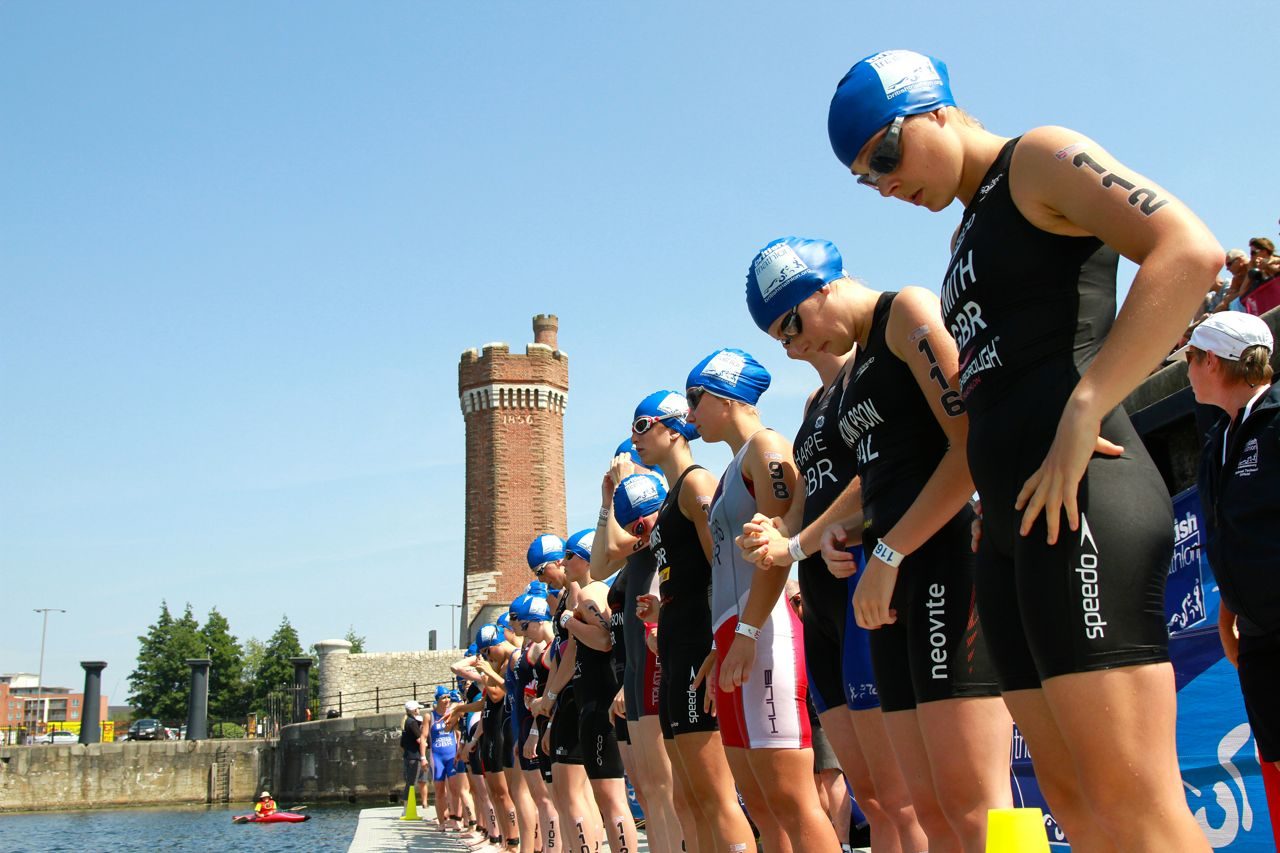 “The swim is great, the water is clean and don’t worry abut all the little jellyfish you can see – they won’t sting and I never thought about them once during the race. I made sure I was first in line to the start pontoon and placed myself in a strategic position on the very right-hand side as this gave me a straight line to the first buoy and also meant I had some open water ahead of me. I hate the melee of thrashing swimmers at the start and always prefer to start on one side rather then the middle.

“I recommend getting ‘on feet’ as soon as you can as the swim course is one lap but rather twisty, it will help reduce the need for sighting and if you are like me, will significantly help your swim split. You will still need to sight so you know where there are turn points and I recommend walking around the dock to look at the whole swim course. I didn’t do this last year, and as a result overshot a buoy and lost the fast feet I was drafting which cost me a good 30secs off my swim split… Grrr!

“Transition is long due to the big numbers racing, so if you can, it’s definitely quicker to have your bike shoes on the bike and do the scoot or run and jump mount onto the bike – it means you can pelt it through transition barefoot rather then in your cleats. There is carpeting down so you should be fine barefoot.

“Onto the bike and it’s a fast course. There is a slight rise up to the far turning point, but its four laps and very straight – a perfect course for a TT bike. If you are on a road bike then invest in some clip on tri-bars as this will certainly improve your bike split. Before the race, practise doing some dead turns as you will have seven of them to negotiate. Brake before the turn, drop down a gear or two, go in wide and then a little burst out the saddle as you come out of the turn and back into a rhythm and into the harder gears again. 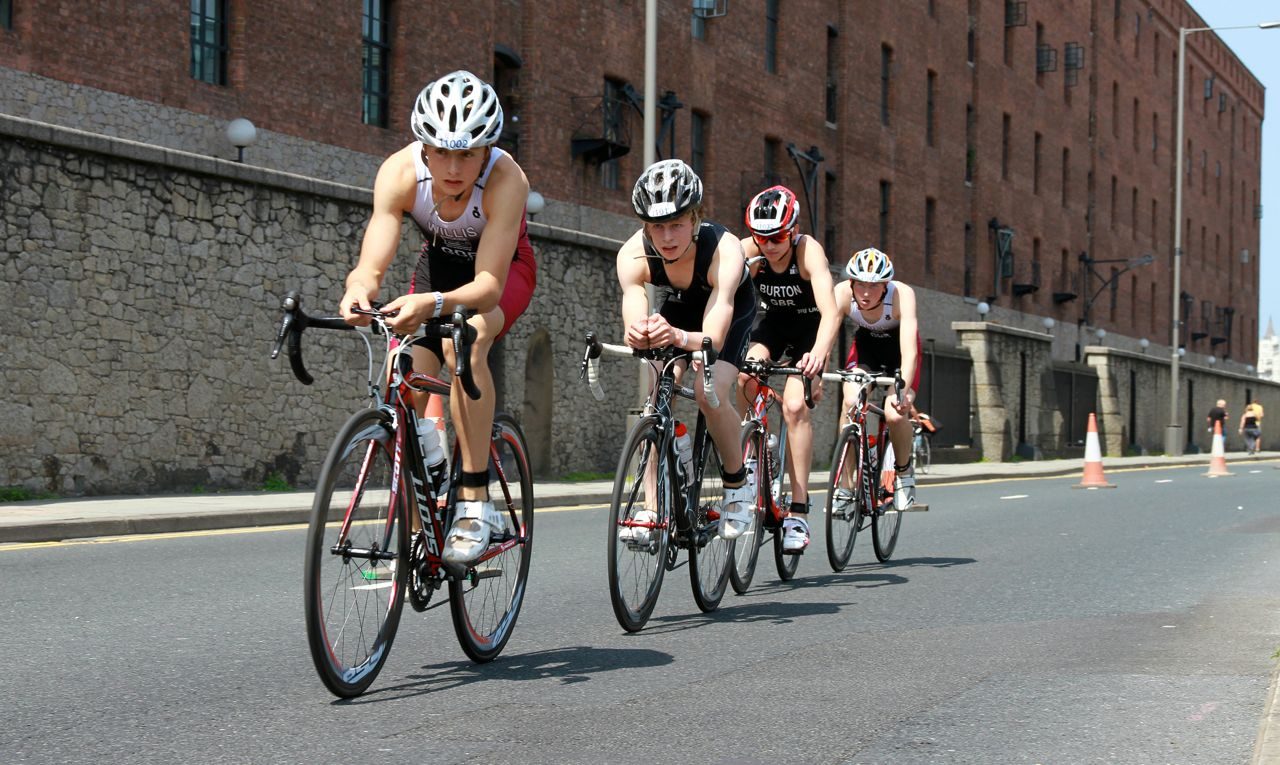 “Dismounting the bike whilst leaving your shoes attached will speed up T2. I have a race motto –“ attack transition” – and it’s stood me in great stead especially where there are long transitions as you make up some good time. Have everything laid out neatly and visualise the transitions in your head before the race so you are slick and fast when you get there.

“The run is very flat and there is good support closer to the finish area. Last year it was very hot and I felt there could have been more water stations along the run course (there are two each lap but they are situated close together), so do take on water whenever possible and possibly make an extra effort to drink more on the bike if the conditions are warm. 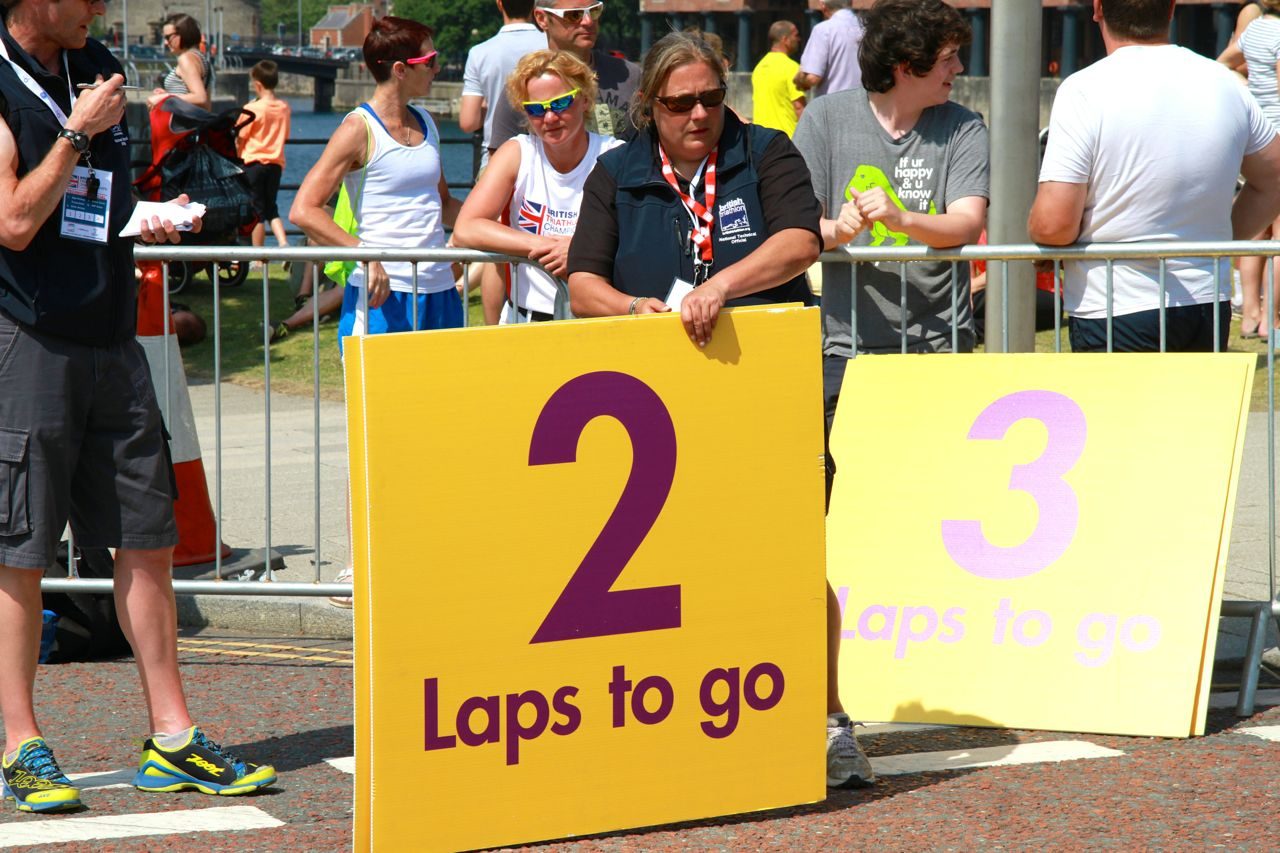 “It’s a two-lap run course, so hold a strong but steady effort on the first lap, let your legs come back to you and then give it everything on the second lap. I sprinted for the finish and I’m glad I did as it resulted in a run split of 35:59….what a difference that one second makes to the psyche! There is a wonderful atmosphere at the race so stick around after to watch the juniors and the elites and enjoy the post-race glow you’ll be feeling. Good luck!”