In the penultimate part of our mini-series, we profile a visually impaired triathlete and two paratriathlon handlers…
Name: Sara Butler
Age: 27
Lives: Birmingham
Classification: Tri 6
Sara Butler, pictured above, took up paratriathlon through Project Viper, which aimed to introduce visually impaired athletes to the sport.
“I’d just finished University” said Butler. “I wanted a new challenge and planned to do a triathlon as a one-off, but took part in the 2008 London Triathlon and got the bug.”
“The main issue for visually impaired athletes is that you need a guide who is as competitive as you are.
“I have had a few guides in the past few years and am building up good relationships. You need to trust your guide and just completely switch off. If I start worrying about if I’ll run into something, or if I’ll fall off the bike, then I’ll not race to my full potential. You can’t afford to be tentative.”
Butler echoes the sentiment shared by her fellow athletes about the future of the sport, and the expertise that they can offer newcomers.
She added: “You can’t underestimate the wealth of knowledge that we’ve built up in our own classifications.
“We all have so much advice to give, and can help people coming to the sport for the first time. At the moment we’re a small group, but there is an onus on us each to pass on what we know.”

The Handlers: Steve Payley & John Kearns
For T1 paratriathletes, the importance of swift, safe transitions is vital. A good crew is essential to success.
Steve Payley (pictured left) and John Kearns (right) – both keen amateur triathletes – work with 2011 World Championship silver medallist Jimmy Goddard.
Kearns said: “I’d never met any paratriathletes but volunteered in order to try and put something back into the sport I loved. I never realised I’d get so much out of it.
“You’re just so driven for your competitor to succeed. I actually get more nervous when I’m handling an athlete than when I’m competing myself. If we get something wrong then that slows his race down. You have to be as switched on as if you were competing yourself.”
Payley added: “I love racing, and so do these guys, but they need a hand doing it. It’s a pleasure being able to help someone who otherwise might not be able to take part.”
Paratriathlon: Classifications
Physically Challenged Competition Categories shall be established based on physical disabilities. Medical evidence shall be required as to disability and classification.
The six categories are as follows:
TRI 1 – Handcycle: Paraplegic, Quadriplegic, Polio, Double Leg Amputee. Must use handcycle on bike course and racing wheelchair on run.
TRI 2 – Severe leg impairment including above knee amputees. Athlete must ride bicycle and run with above knee prosthesis (or similar prosthesis) or run using crutches.
TRI 3 – Les Autre: This category includes athletes with Multiple Sclerosis, Muscular Dystrophy, Cerebral Palsy, double leg amputee runners or paralysis in multiple limbs. Athlete will ride a bicycle and run. Athlete may use braces or prosthesis if required.
TRI 4 – Arm impairment including paralysis, above-elbow amputees and below-elbow amputees, or impairment in both upper limbs. Athlete may use prosthesis, brace or sling on the bike and/or run.
TRI 5 – Moderate leg impairment including below-knee amputees. Athlete rides bicycle and runs with prosthesis.
TRI 6 – Visual Impairment, legally Blind (20/200 vision with best corrective vision). A handler of the same sex is mandatory throughout the race. Athlete is tethered during the swim and run. Athlete uses a tandem bicycle.
Source: http://www.triathlon.org/paratriathlon/categories/
For more information about how to get involved in paratriathlon, contact jonathonriall@britishtriathlon.org.

GE is a proud partner of the London 2012 Olympic and Paralympic Games, and the Elite Partner of the GE GB Triathlon & Paratriathlon teams – providing support and expertise for the athletes as they prepare and compete at the highest levels. See more at www.facebook.com/GEtriathlon 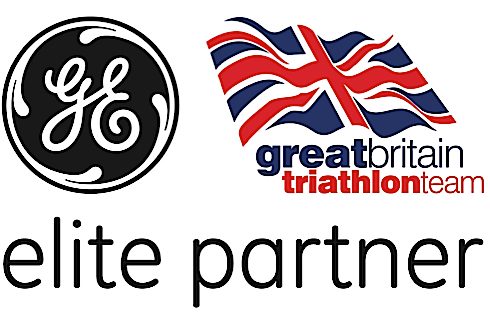