The story of eight-year-old Noah Aldrich, the budding triathlete who wanted his disabled brother Lucas to share in his first race, has received attention from the mainstream press on both sides of the Atlantic.

For those who haven’t seen it yet, Noah took part in a triathlon organised by his local YMCA club in Boise, Idaho earlier this year, powering both himself and Lucas the whole of the 200m swim, 3mile bike and 1mile run course.

We spoke to their mother Alissa about how Noah came up with the idea, how the race went for the two brothers, and whether they’ll be taking on any more triathlons in future…

220: How did Noah get into triathlon?

Alissa Aldrich: It came about with the Lucas House idea really, I was talking to various local non-profits in the community and met with the CEO of our local YMCA. He mentioned that they had a local youth triathlon club for all ages and abilities, and said I should bring Lucas down.

I was interested but didn’t think much about it at the time, but at the same time a friend had sent us an articles about a couple of brothers who had done a triathlon, and my older son Noah watched it with me and said, “Mom I want to do this with Lucas, this is a way we can play together. Usually when I do sports my brother has to sit and watch,  and this is something he could participate in.”

So we contacted the local YMCA, chatted to some of the coaches and got training! We met with the YMCA coaches on April 30th and started training on May 1st. To be honest when we started training Noah could barely swim a length of the pool.

What inspired him to take it on with Lucas?

He just really wanted to do something with his brother where he could play with him. Given Lucas’s condition, he can’t walk, he can’t talk, he’s in a wheelchair, they play together but it’s not the normal type of play for siblings. I think it was truly the desire to include his brother in something special and have fun. Perhaps that’s what so is endearing to people about the story.

How did the race go for them, what were the highs and lows? 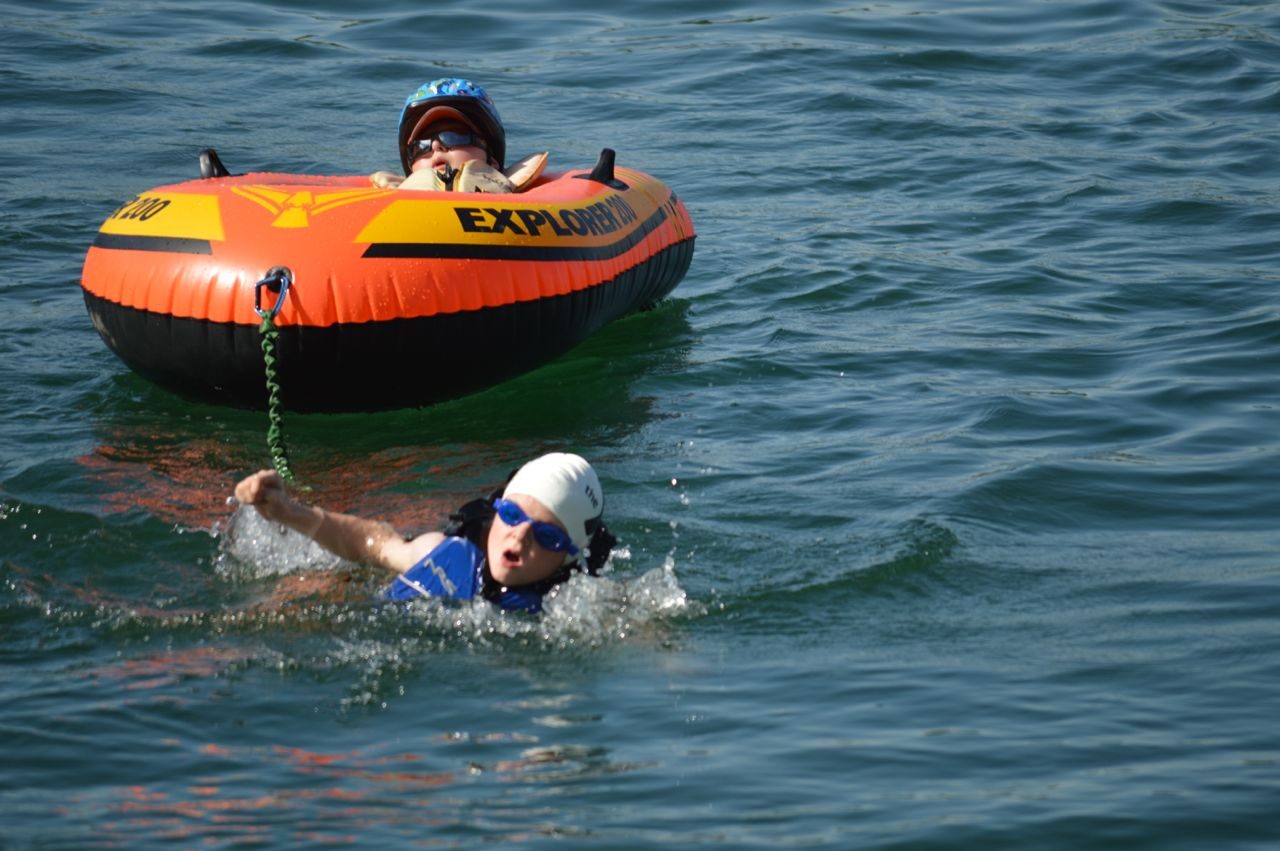 The race went well, it was a 200m swim in a pond, 3mile bike and a 1mile run, so pretty good eight lengths for an eight-year-old, given it was his first race and was doing it with his brother. We went down there and the atmosphere was exciting, got all geared up and into the water, no issues in the swim. Then they got on the bike which went flawlessly, they just had a great time and there were a lot of people supporting us and helping us with the transitions.

Then in the run, by the time they got to that part it was getting pretty warm outside, and it wasn’t all on a paved path, part of it was on a bumpy dirt path, and so that gave them a bit more of an obstacle, but Noah did phenomenally, he ran the whole entire way, it wasn’t like a jog he really pushed his brother hard.

One of Noah’s favourite moments during the race was every time he went by during the two-lap bike course he got a lot of cheers, he stood up a little straighter on his bike, he pedalled a little faster, and as a Mom I couldn’t have been more proud. 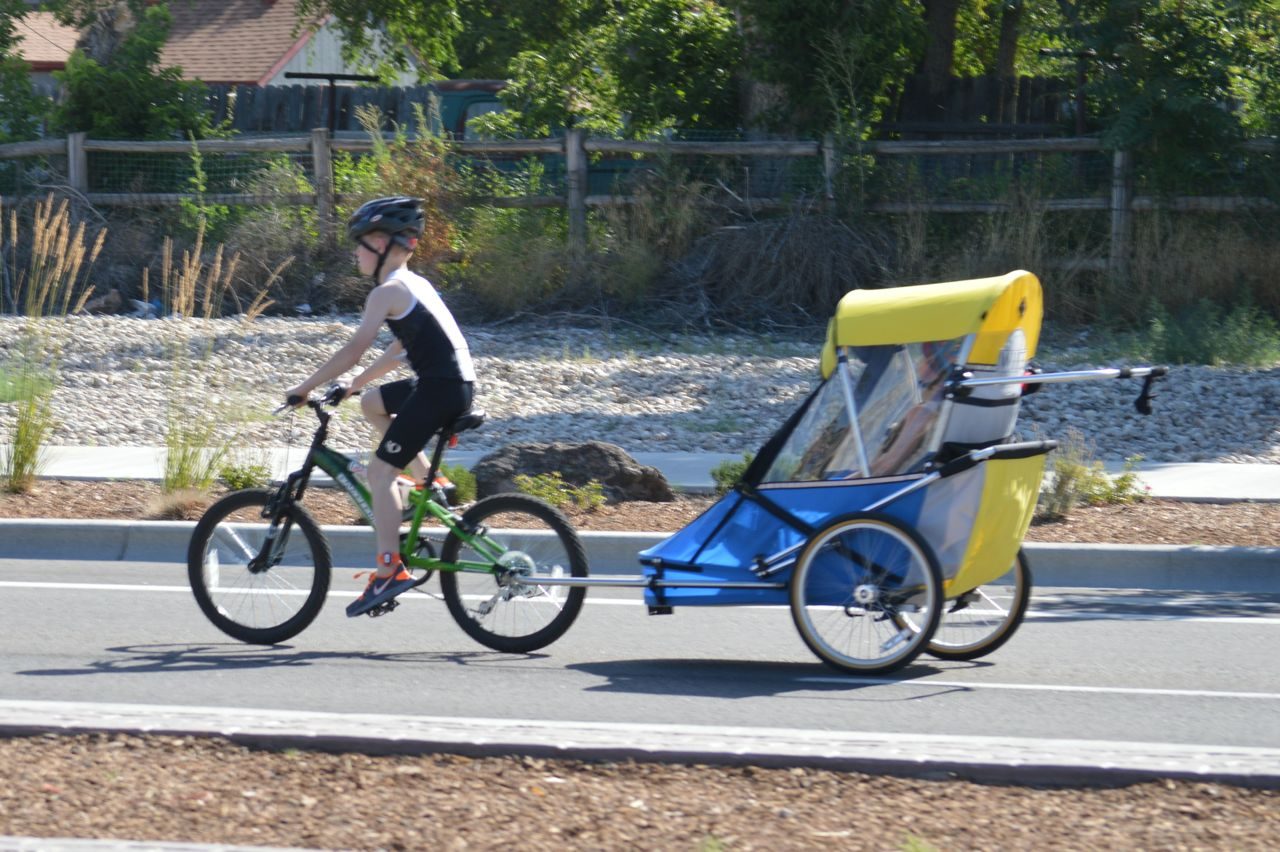 What did their friends and family think of it all?

Everybody was just super-supportive, it was a little bit of an emotional thing too, a few tears, doing something like this is not common I don’t think. To see the love of Noah for his brother was just incredible. People were just overflowing with emotion.

What has it been like to get so much international interest in this story? 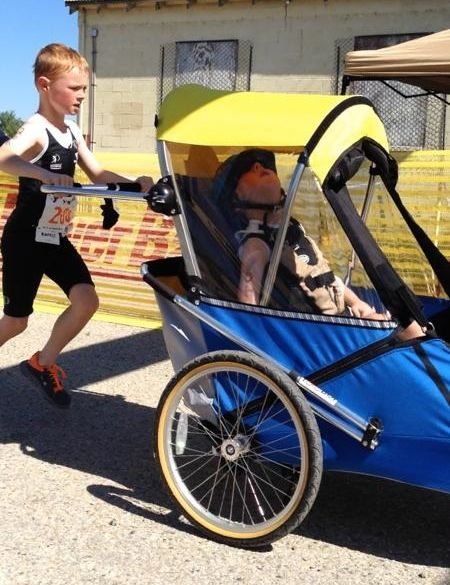 To be honest it’s been a little overwhelming at first, but it’s been great, such a pure, true story about the goodness of humanity, we’re so glad to be able to share that. Our family motto of including Lucas in our family, we’re looking at possibilities and abilities and not disabilities, it’s been a good message to share.

Finally, will Noah and Lucas be taking on any more triathlons in the future?

They are going to be doing one on Friday, a similar one to the last one but with the swim in a pool rather than a pond in a suburb of Boise around 30 minutes away, just another local race.