When I heard that Alistair and Jonny Brownlee were going to host a triathlon on home turf in Yorkshire, I had a feeling that it would be a special day, and one that I wanted to be part of. But I never imagined quite what a memorable experience it would turn out to be.

Back in July, having just qualified for the GB Sprint Age Group team for London, the idea of inviting friends and family to join me in the beautiful surroundings of Fountains Abbey immediately struck me as a great way to end the season.

Alistair and Jonny are terrific role models and ambassadors for our sport, and so I wanted to give their event support right from the start. I also told myself it would be my own personal ‘lap of honour’ after the world championships!

So my entry went in on the very first day, and though my training and thoughts over the summer were focused on the world championships, my mind often turned to the Brownlee Triathlon and the chance to really enjoy myself, without the pressure of age-group qualification and competition.

Well the world championships duly came and went, with all the excitement that competing on home soil, on the Olympic course entailed. I arrived home having achieved everything I had set out to do in my best-ever season, and there, a couple of days away, was the Brownlee Triathlon to provide that perfect finale I had planned.

Whilst checking some of the event details, and flicking idly through messages on my Twitter account (which I set up at the start of my AG qualification campaign to harvest tips and inspiration), I spot Alistair’s request for relay team members, following his ankle injury.  “Now that would be a great end to the season,” I think to myself!

The inspiration for my pitch comes courtesy of my two sons, who had watched every agonising moments of the Grand Final with me the week before (as well as so many of my own races for a long as they can recall!).  So I select a photo of them in Trafalgar Square, stood with a cut-out of Alistair, and submit my entry. 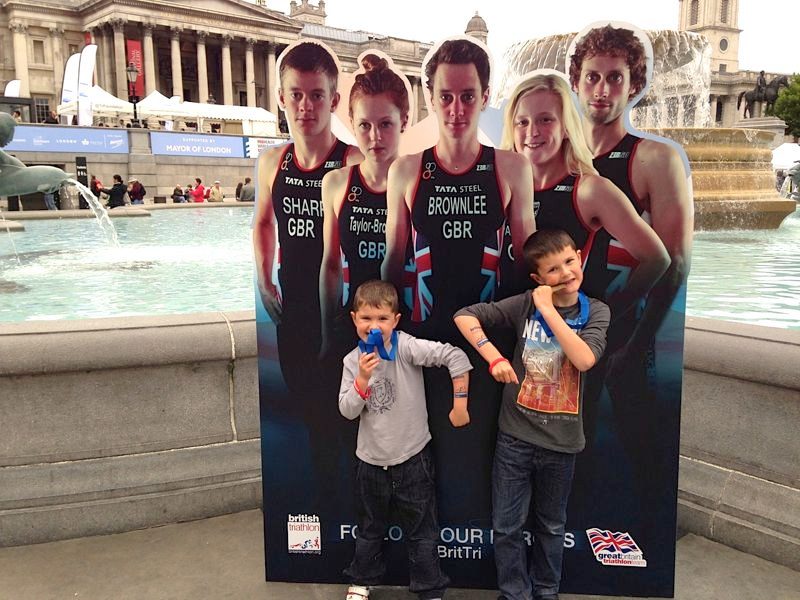 When I check my phone at lunchtime on the Friday, and discover that I have actually been selected for Alistair’s team, the feeling of excitement is incredible. Alistair and Jonny are genuine heroes, not just in triathlon but in world sport generally, and though I am old enough to be their dad, and am not generally inclined to being star struck, I feel like a kid – this is a really big thing!

But now I have two events to prepare for – my own race at 10:50am, and the Brownlee ‘head to head’ at midday. I also have my nephew’s fourth birthday party to transport my family to, and it starts to become clear that I am woefully unprepared for juggling all these priorities!

Fortunately, such is the quality of information, signposting and marshalling for the event, my lack of preparation doesn’t prevent me from arriving where I need to be, when I need to be there. And when my lack of preparation leads to turning up at transition with just about all the wrong labels in all the wrong places, the terrifically helpful staff and volunteers help to get me sorted.

To have such universal good humour and willingness to help is not just testament to the effort that has gone into organising the event, but also to the incredibly high regard Alistair and Jonny are held in. Everyone seems to be excited to be part of it and determined to make it a success.

This doesn’t save me from myself however: as I reach the end of my second lap of the bike leg and take my feet out of my shoes to dismount, I manage to mash the toes of my left foot through the spokes of my front wheel.

I continue on into transition, find my shoes, and set off on the run. The toes certainly feel sore, but the injury doesn’t appear to be harming my form, so I plough on.

Despite this latest calamity, I have emerged from T2 once again leading my wave. But it feels unlikely with so many errors and problems during a super-sprint distance event that I will be in the reckoning for the prizes.

No room for numpties

I also have the only tactical instruction provided by my relay team captain Alistair ringing in my ears: “Don’t go too hard before the relay!”

Though said with a smile (for the prospect of a 66.6% amateur relay squad beating Jonny was pretty remote, even if the other 33.3% is the Olympic champion!), Alistair’s remark gives a window into the unwavering competitive nature of the man.

So I run at a pace somewhere below what I feel I could sustain over the 2.5km course, keen not to stand accused of being a tactical numpty (though this would put me in pretty good company).

The final section through the Abbey twists and turns, and is quite unlike any I have experienced, before emerging into the finishing straight to the applause of a crowd of enthusiastic onlookers.

Each athlete seems to have their own vociferous support, but the overwhelmingly positive atmosphere at the event seems to be encouraging the crowds to get right behind every finisher as they cross the line.

I hand my medal and (very impressive) Adidas goody bag to my family, and noting that the webbing on top of my shoe is gradually turning crimson, I eschew the offer of a golf buggy lift back to transition in favour of keeping moving.

Jogging back allows me to remain in denial about the possible extent of my injury, and also gives me the chance to observe the faces of the huge numbers of supporters who are making their way towards the finish. I also pass through the entertainment village where Triathlon England are putting countless future triathletes though their paces. Absolutely everybody seems to be smiling.

When I meet up with my fellow relay squad members and Jonny, I have time to receive some treatment from the St John’s Ambulance volunteers (thank you!) to stem the bleeding. My toes aren’t in terrific shape, but the prospect of dropping out doesn’t even register as a consideration and I put my shoe back on as quickly as possible, so that I can return to my state of denial.

The race is, unsurprisingly, over as a contest very early on, with the valiant efforts of James McCormack on our swim leg proving to not quite be enough to keep up with one of the world’s fastest open water swimmers!

Alistair then took over for the bike leg, and though he pulled a little bit of time back, the two-lap, 10km course was never going to provide enough of an opportunity for Jonny to be reeled back in.

So it was a somewhat surreal experience as I stood in transition, first watching helplessly as Jonny arrived and then left again, and then craning my neck to try and get the earliest possible indication that Alistair was on his way.

The next part of the experience will live with me forever. Alistair arrived just over a minute in arrears, and handed me the timing chip.

Though the idea that I might catch a reigning Olympic bronze medallist with a head start is beyond fantasy, I set off with the steely determination to run as hard and as fast as I possibly could.

Moments earlier I had heard the incredible wave of cheering and applause as Jonny set off down the hill onto the run course, but I was not at all prepared for receiving the same level of encouragement as I set off to give chase. Again I am struck by the way that the warmth and affection felt for the brothers is filtering through every aspect of the event.

Passing through the crowds at the start of the run, and experiencing the almost deafening wall of sound of people shouting my name, is truly amazing, and though I have no evidence to support this, I feel sure that it is carrying me to the fastest first kilometre I have ever run!

On the middle section of this, my second run of the day, I have a few moments on the tranquil woodland trail to gather my thoughts. But, being a 2.5km super sprint, I am soon back into the crowds and being carried along on a wave of encouragement and goodwill.

This time when I arrive at the finish (having conceded only 37 further seconds to Jonny), I am once again greeted by that incredible wall of sound. 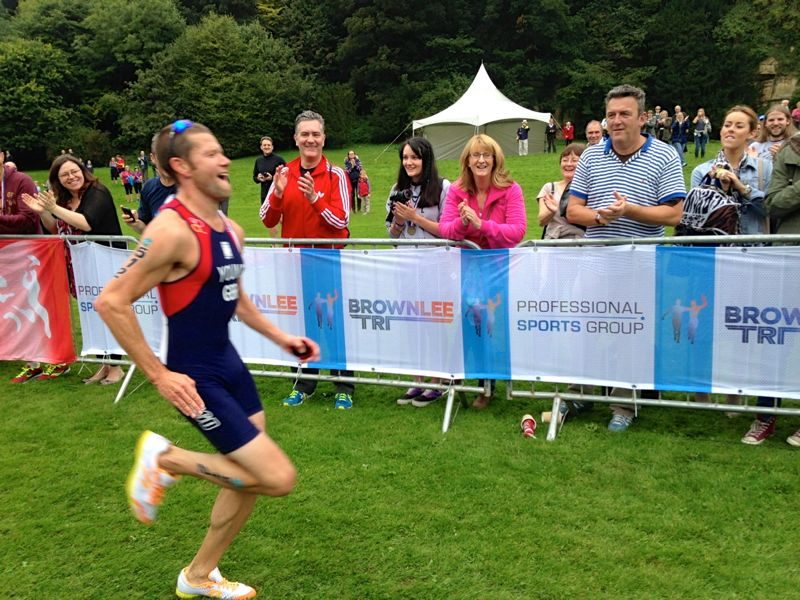 I opt for a full tilt, all out sprint finish (which goes some way to explaining how I limited my losses to Jonny, who I later learn took the time to high-five spectators and raise the finishing tape above his head for the photographers!) and am rewarded with a handshake from each of the brothers, and with the chance to bask for a little while in the reflected glory of their amazing achievements.

Just before relinquishing my spot in the limelight, I lift my sons Alex (7) and Dan (5) over the barriers to join me for photos with their triathlon heroes. Then, with a huge grin fixed on my face, I put a top over my tri-suit and melt back into the crowd (which is easy to do because the whole crowd seems to be grinning with me).

But putting my own unique and amazing experience aside, did it all match up against Alistair and Jonny’s aspirations for the event?

In a word, absolutely! It attracted loads of newcomers, loads of supporters, it was friendly, fun and everything seemed to go incredibly smoothly. Put simply, it was a perfect showcase for our sport, and a perfect platform for two truly remarkable individuals. 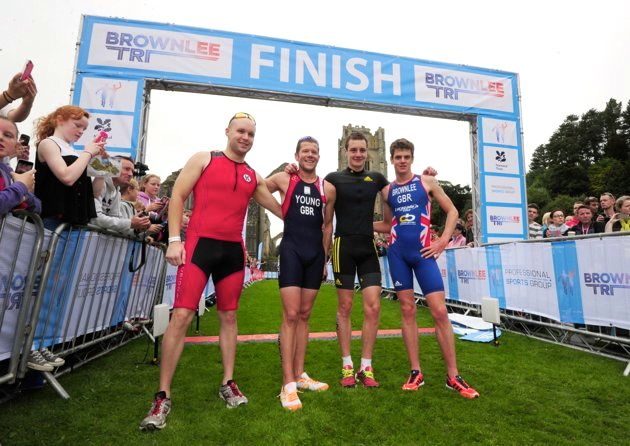