Jonny Brownlee: ‘In a Commonwealths year you’re focused on that one day’

Britain's top-ranked male triathlete talks sprint finishes, WTS race points and who he wants on his team in Glasgow

With WTS London just a few days away, we speak to Britain’s top-ranked male triathlete Jonny Brownlee about whether he’s got over last year’s infamous sprint finish at Hyde Park, whether there are too many WTS races on the calendar, and who he wants to join him and older brother Alistair on the English men’s team in Glasgow.

To listen to the full interviews with Alistair and Jonny, check out our latest podcast here. The latest issue of 220 Triathlon magazine features lots of advice from the Brownlee brothers on how to bike faster, and the digital editions include bonus videos with the two athletes discussing their current bike set-ups – more info here.

220: It’s been seven months since that World Series sprint to the finish, how are you feeling about it now, are you over it yet?

Do you think the women have been a bit conservative in their own racing style over the years?

Alistair was saying there are too many races that the elites have to do to accrue points – do you agree with that?

On the flip side it does make it more exciting and glamorous for spectators. Do you think there is a happy medium?

I think fewer races is a medium. Maybe people would prefer to watch four really good races on different courses than seven average races. For athletes as well, you could quite easily have a couple down New Zealand way, then come to Europe and have a few European races, just link it in better so that athletes don’t have to go here, there and everywhere.

With it being a Commonwealths year, how has your training and race focus shifted? 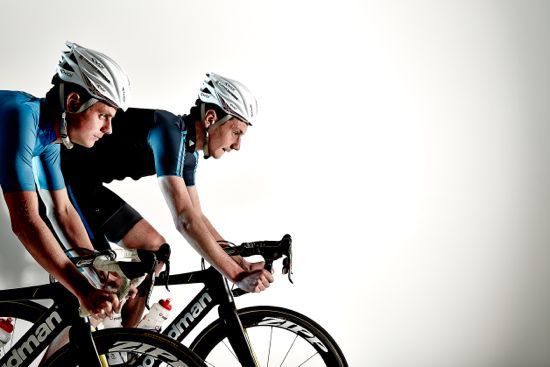 It makes it similar to the Olympics – in the World Series you want to be consistent over the whole year and then get to the Grand Final a bit fitter. For the Commonwealths this year that’s the main aim – I’ll go to altitude training in Switzerland just before the Commonwealth Games. For five weeks I’ll be there and shut down all media stuff and other races and train hard for that. It makes it more of a one-day year, you are focused on that one day. It makes it more exciting – I’ve never been to the Commonwealth Games, the team relay is something different and exciting, and it’s good for triathlon.

Yeah it’s an interesting one, because the Commonwealths were always going to struggle after 2012, the Olympic Games were just incredible. It is a little bit of a shame, but that was always going to happen, the Commonwealth Games is not the same as the Olympics, but for an athlete that doesn’t really change too much, you set yourself an aim and you go for it anyway, and it will still be exciting. I think the Commonwealth Games is one of those things that when it gets closer everyone will get a lot more excited about it.

Who would be your choice for the third spot on the English men’s team?

Gordon Benson from Leeds. He’s a good young athlete. It’s very open, the English guys have got to show themselves, and I think they will take a team person, a domestique or anything like that. There’s still time for them to show themselves.

It should be a pretty easy race for the English men’s team, wouldn’t you say?

I would say we’ve got a good chance, as a team as well in the team relay. Team relays are interesting – I was at the team relays in Hamburg last year with Non and we had the best team there, and things can go wrong, that can happen very easily. With it being so short, small things can make a big difference. We should have one of the strongest teams but lots can go wrong, and that’s triathlon. All you need is a bad swim, or a puncture or something, and it can change the race completely.

In the individual race as well it will be very interesting having a smaller field – we’re used to competing in fields of 65 or 70 people, but with the Commonwealths it will only be the best part of 30 people on the start line.

Who’s your money on for the women’s race?

It’s got to be Non at the moment, even though she’s injured, she will come back stronger, she was world champion last year. Someone out of Non, Jodie [Stimpson], Helen [Jenkins] definitely. It’s a strong women’s field, the fact that it is England and Wales does make it stronger than Great Britain in a way, the Australians always pull it out, the Kiwis…

Who do you think will be the third pick for the English men’s triathlon team at this year’s Commonwealth Games? Let us know in the comments below!

For lots of exclusive advice from both Brownlees on how to bike more strongly this season, pick up a copy of 220 Triathlon magazine’s issue 300 – on sale now
Advertisement

Subscribe to the mag before the end of June 2014 and you’ll receive a free Huub transition bag worth £69.99 – more details here

David McNamee: ‘Kona is the dream I have to chase’