Tim Heming, sports journalist at The Sun, has become our latest regular columnist for 220 Triathlon magazine, where he will be giving his unique take on the world of multisport every month.

We fired some quick questions at Tim and received the following replies – including the revelation that he once dished out a beating to ‘Family Fortunes’ host Vernon Kaye.

What do you do for a day job?

Whatever Uncle Rupert tells me to do. I’m a journalist at the Murdoch-owned News UK, home of The Sun and The Times, the most popular and despised daily publications in the UK.

What do you like most about the day job?

Is The Sun at all like the stereotype of a tabloid news office?

Yes, we chain-smoke at our desks, swear in words of no more than two syllables and never use the word syllable. Actually (for older readers) it’s more like Drop The Dead Donkey – which ironically is what my cycling chums suggest they do to me on long rides.

Because I’m a fan chasing the halo effect. All sports journalists are fans initially, then they meet their heroes and it all unravels. Just ask David Walsh.

The third one (although he might have retired now. Whatever, his smack talk on Twitter was far better than Alistair talking about northern cake shops.)

Tough question, serious answer. In my humble opinion, both these ladies are two leading female role models in British sport. The more young girls that hear about them and are inspired by their careers the better.

Best ever result in tri?

I was the first Sun journo home in the London Triathlon race we did in 2010, where we dished out a sound beating to Family Fortunes host Vernon Kay. Although, of the 100 people we later surveyed, no-one gave a s***. 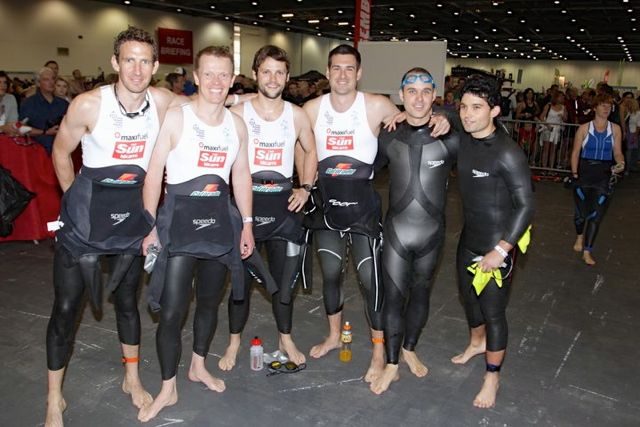 Do you prefer wearing neoprene or Lycra?

What bike do you currently ride?

Fuji Team Pro something or other road bike and a rusting hybrid for commuting everywhere in London. I think it was originally a Trek but it’s hard to tell now.

Who would you invite to your dream dinner party?

Javier Gomez and the Brownlees. I’d host it concurrently with a World Series race just to give commentator Barrie Shepley someone else to talk to at the end.

Who would play you in the film of your life?

The late John Pertwee, who played scarecrow Worzel Gummidge. Equally scruffy, but he was always outstanding in his field.

What’s the closest you’ve ever come to death?

I electrified a 20-tonne digger I was driving for my dad by hitting overhead powerlines setting fire to the field, but thankfully not frying myself.

What is the worst job you’ve ever done?

Driving a 20-tonne digger for my dad.

Chester the Squirrel. I wore it as the official mascot for the 2012 Royal Parks Half Marathon and set a new squirrel record in 2:13hrs. It was a chafing experience and because it was for charity I decided to donate five layers of skin.

Tell us a joke

Did you hear the one about Gordon Ramsey qualifying for Kona?

Issue 297 of 220 Triathlon magazine can be picked up at all good newsagents from 4 March, while the digital edition will be available via the iTunes store, Google Play and Zinio