A late show of strength from Alistair Brownlee enabled Britain to take victory from an always-threatening French team at the Mixed Relay World Championships earlier today.

First up for GB on a cloudy afternoon in Hamburg was Lucy ‘The Mermaid’ Hall, whose prowess in the water meant she exited the 300m swim among the leaders. Hall soon settled into position in the lead group on the 6.6km bike and was frequently seen pulling them along from the front, though a minor stumble in T2 (reminiscent of Jodie Stimpson’s more serious one at WTS Yokohama) meant she lost some momentum.

Into the 1.6km run and Hall managed to keep the leaders Yuka Sato (JPN), Zsófia Kovács (HUN) and Rebecca Robisch (GER) in sight, though at handover Jonny Brownlee found himself in 12th position and with a bit of work to do. The younger Brownlee got cracking and left the water less than 10secs adrift of the leader, Ben Kanute (USA). Jonny quickly closed down on the lead bike group and before long was where he wanted to be – bossing it from the front. 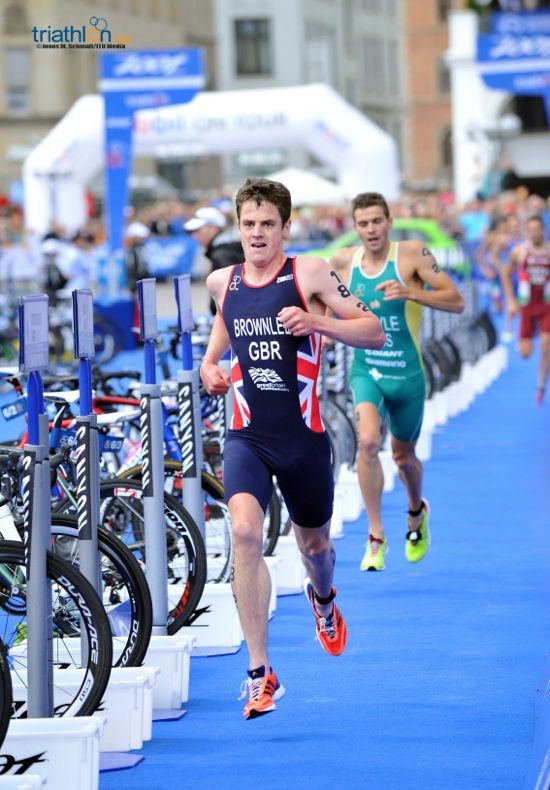 One clean handover to Vicky Holland later and Team GB were again in the lead, but with lots still to do if they were to keep the USA’s Gwen Jorgensen off their back. Holland managed to retain a clear lead right until the end of her second bike lap, when athletes from France, Italy and Hungary finally caught her. 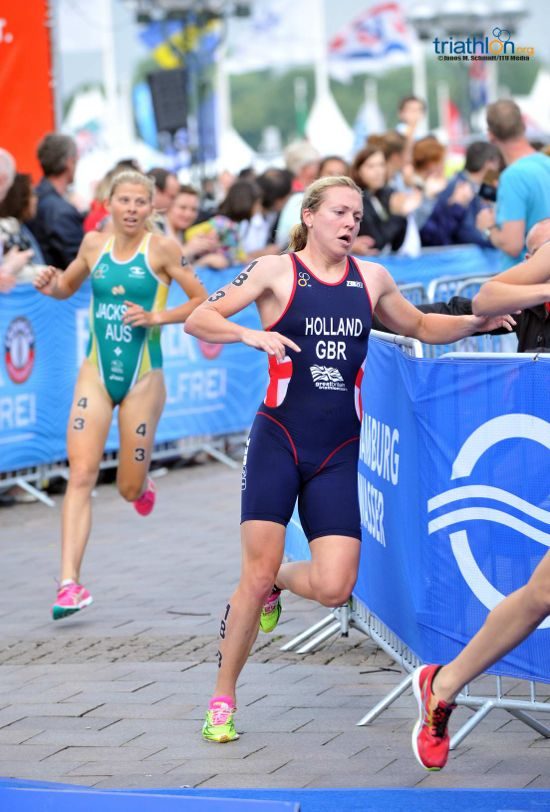 It was Australia’s Emma Jackson however who grabbed the initiative, overtaking Team GB on the run to give the lead at final handover to Aussie athlete Dan Wilson, sporting an impressive moustache.

Leading the men out of the water was French athlete Vincent Luis, who took silver in the men’s WTS Hamburg race yesterday, followed by Luis, Brownlee and Hungary’s Akos Vanek. Onto the bike and it quickly shaped into a two-man fight for gold between France and Britain, with Brownlee looking gritty and determined and Luis by turns grimacing and smiling. 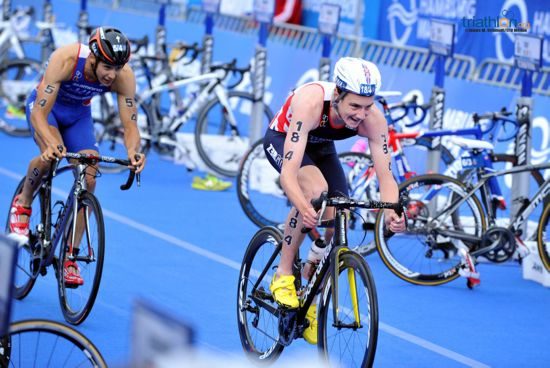 Alistair Brownlee opened the taps with the finish line nearly in sight and the French athlete had no answer, giving Team GB gold in a time of 1:19:07. Luis took silver for France 4secs later and Hungary’s Vanek crossed the finish around 20secs after that for bronze. 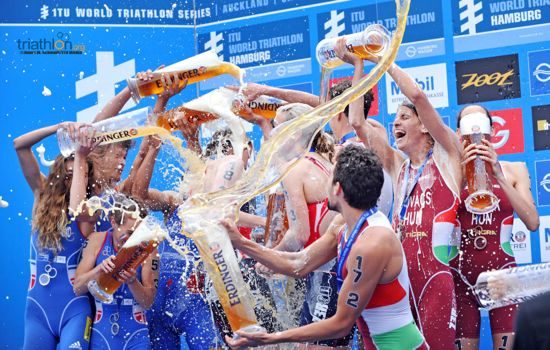 “It’s not been a bad weekend,” said Holland, who took seventh in the women’s WTS Hamburg race yesterday. “It’s all in prep for the Commonwealth Games and hopefully I can be part of the relay again there. It’s fast furious racing, but it’s really fun and I’m really pleased to be part of it.”

Were you watching the race? What did you think of Team GB’s victory? Let us know in the comments below!