Jason Briley first featured in 220 back in August 2009 (issue 237). Having kicked drink, drugs and smoking – addictions that had put his life on hold for 15 years – he was taking on his first half Ironman challenge at Wimbleball. Since then he’s raced IMUK, IM Wales and has dropped six stone to now weigh 14. Here, in the first of two parts, he recounts his third full Ironman race, back in Tenby for Ironman Wales 2012.

I’ve travelled to Tenby with Andover Triathlon’s club coach and friend, Baz. He did this course with me last year and is a multiple Ironman finisher – the perfect person to have in my back pocket. The weather forecast is usual for September in SW Wales: wet, cold and very windy. But no worries, I have to focus on what I can control.

Settling into our eight-berth caravan on the Friday evening, Baz rustles up a low cal, low fat, high carb meal. My usual attitude towards healthy food is: “I’m doing a 15hr race on Sunday; I can eat whatever I want!” But something’s changed in me since this time last year.

Firstly, I’ve had a few ‘fat-hangovers’, which are exactly what they sound like. I’ve felt extremely ill in the middle of the night and disgustingly queasy well into the next evening the few times I’ve had a fat-saturated cheesy pizza, deep fried chicken or fried bread. And secondly, I’ve achieved my goal weight. This was one of my start-line goals and losing just under six stones to reach 14st 3lbs, wearing a medium t-shirt and being able to feel my ribs (on a good day) has really kept me on track. Things are finally beginning to click in my brain about food choices. This was one of my three goals this year. The other two being:

1 See if I can finish this Ironman having focussed 90% of my training on the run.

2 Do the whole race without any timing devices – not even a normal watch. 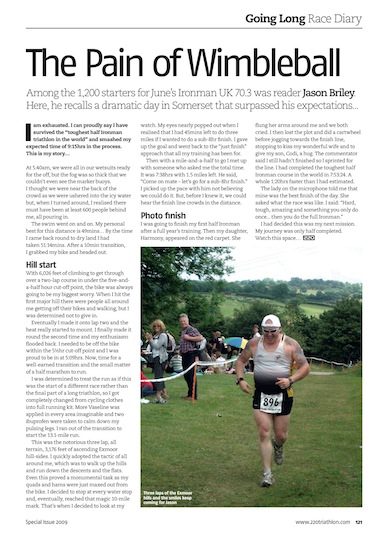 As usual I don’t get much sleep the night before the race. The alarm goes off at 5:15am, I want to sleep for another year. Breakfast is porridge, an energy gel and a coffee. Walking to the swim start, I say goodbye to Baz and joined the mass exodus heading to the beach. I don’t say much to anyone. I’m just enjoying being on the start line of my third Ironman race in three years.

I start at the back and watch as 1,500 people effectively beat each other up. About 30secs later, I clean my goggles, stick in my ear plugs, take a deep breath and dive in. I start overtaking people straight away. I quickly find my usual line which is a meter or two inside the buoys, where no-one swims – no mans land, the perfect place to avoid the flailing arms and the shortest route between buoys. But this is brilliant, I’m loving it, which is surprising as I’ve only swum five times in 12 months.

Seeing thousands of supporters lining the beach, cliff paths and road, really spurs me on to sprint past more swimmers. Hitting the sand for the ‘aussie exit’, I continue on my mission to overtake. But my endeavours elevate my heart rate so high that they all overtake me again in the water. That’ll teach me to show off. The second lap goes much the same as the first, I just keep reeling in people in front of me.

Soon enough, I reach the beach, step onto the timing matt and hear that fantastic ‘beep’ sound from my timing chip. As soon I start running up the cliff path everything inside me starts screaming, ‘Slow down you bloody idiot!’ But I ignore my other self and crack on.

I reach the top of the cliff, spot Baz with his camera, give a smile, a high five and crack on through town. Grabbing my beloved squeezy honey pot and pasty, I put them in my back pocket and make my way out to find my bike – not hard as there’s only about 300 left, which I guess means I overtook 300 people as I was last to start the swim! A quick glug of energy drink and I start the bike leg quite chirpy.

Over 6,5000 feet of climbing in the Welsh winds and rain ahead. You’re allowed up to the 10.5 hours to complete the course, which means with my average swim time I could be in the saddle for anything up to 8:40hrs.

Having no timing or mileage device on my bike is a great move, as I’m not constantly looking down and panicking about my time, distance or average speed.

Within a matter of hours all around me were saying the same thing: ”It's all about survival today, sod the time, as long as I make the bike cut-off.” I confess, I was telling myself the same. My mini goals of hitting a PB by going just a minute faster than last year’s 14:17hrs, perhaps even going sub 14hrs, have gone right out the window! It’s now come down to, ‘just keep pedaling, keep on pedaling’.

Saying that, I’m consistently overtaking people on the whole ride, and riding away from them, albeit slowly. My choice to put a low-profile front wheel on instead of my posy carbon, thick rims was another stroke of genius as the cross winds don’t affect me like it does others.

I hit an all-time low when it starts to pour down. But putting my windproof gilet on feels like putting on a duvet! It’s heaven, and I soon cheer up.

I’m now out on the coastal path, about to tackle the three worst hills on the course. I feel just as slow as last year, but I refuse to get off and do the walk of shame as others are, the ones with much shinier, lighter, more expensive carbon bikes and pointy aero helmets. Every time I pass one of these guys I vow that I’ll never buy all the fancy kit. Stick with the cheap kit, I say. Passing them does give you extra energy, though, and the crowds up the hills makes you feel you’re in the Tour de France! Sound systems blast out from houses and pubs. It’s absolutely awesome. This is why I’ve come back to Ironman Wales.

I eventually make it back into town having completed the first separate loop and the first of the last two hilly loops. I see Baz and slow down enough to high-five him. Then he’s out of sight and reality hits again. I’ve got over 40 hilly miles to ride, the rain’s getting worse, my legs are bursting and the energy’s starting to fade… along with my morale. So I make the decision to pull over, get off my bike, walk around and stretch off under some trees to shelter, eat my pasty, drink loads of energy drink, recompose my brain before setting off again after a 64-gallon pee. This all helps, but I’m still weakening. I keep telling myself that the food I just ate will convert to fuel, any minute now. But will it…?