With a cycling career that’s brought her an Olympic silver and the world time trial champs, British athlete Emma Pooley surprised many people earlier this year by announcing her retirement from the sport to concentrate on multisport, and triathlon in particular.

We caught up with Emma to ask how things have changed since her retirement from cycling after the Commonwealth Games in Glasgow (where she won two silver medals), what triathlon distances she’ll concentrate on, and whether she plans to go pro.

“Well Glasgow was a wonderful occasion for me, I knew in advance that I was going to retire there so it was pretty special because it was my last games experience and there were home crowds,” she says.

“It was a friendly games experience and my family were there to watch, so my experience was really good and I think Glasgow did a good job of hosting it.”

Emma’s retirement may have come as a shock to some, but she is clear that she retired to pursue other interests, and Glasgow proved a great place to end her professional cycling career on a high.

“I had told some people that I was retiring, like the team and my family – that’s why they came to watch! I think some people were a bit surprised, its almost like they don’t expect you to stop when you are doing well and I think after the nationals I had an alright season, so they think, ‘Why stop while you’re ahead?’. But I would much rather stop while I’m doing well, then due to not performing well anymore. So for me, it was perfect to go out on high, it was wonderful, but quite a lot of people were surprised.

“I was clear that I didn’t retire because I didn’t want to do it anymore, I retired because I want to do triathlon quite seriously, and my experience of them both is that you can’t do them both at the top level, you are always compromising if you do both so that was my reason and I think it was nice to demonstrate that by not doing badly in my last races.”

To boldly go into triathlon

Emma wants to test the waters in triathlon. Her venture into multisport is looking promising as she has had some good results in both tri and duathlon after wining the long course World Duathlon Championships this year, and has won some marathons in the past as well as placed top 10 in other races.

Emma says: “I explained in my retirement interview that I wanted to be able to see how I can do in triathlon, but I keep getting told off for going training or doing races when people keep saying, ‘Aren’t you supposed to be retired?’

“I’ve been trying to do both [cycling and triathlon] but it just isn’t possible really. I’m not saying I will necessarily be any good at triathlon, but I want to have a go, I love running and I love swimming and I have just got to the stage where I really resent not being able to do those things in the bike season.”

“I think I’ve got potential in triathlon to improve, so I wanted to have a go and I knew that I wouldn’t improve if I kept trying to race professionally as a cyclist along side triathlon. I’ll still do bike races as training, but not at a professional UCI level.”

So what distance is Emma aiming for? In the last couple of years she’s had some good performances in duathlons, Ironman Rapperswil 70.3, and Ironman Zurich…

“Last weekend I won the Long course Duathlon World Championships in Zofingen and broke the course record by 16 minutes, and that was a course that suited me. 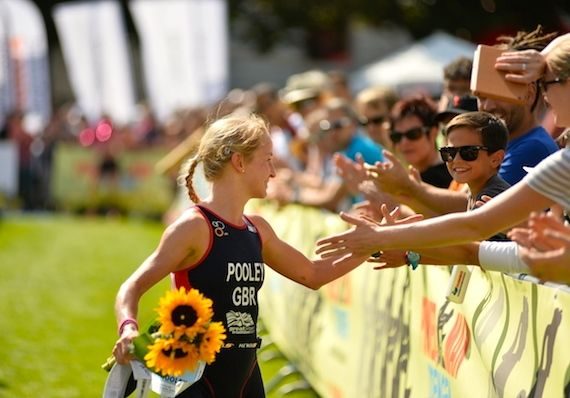 “I prefer the longer courses and I’ll maybe do some shorter stuff but with lots of hills, that’s more my cup of tea.”

“Ironman Zurich was pretty rubbish to be honest, I came fifth and had terrible stomach pains on the run and I couldn’t really run and this year I came second in Ironman Rapperswil-Jona 70.3 (Switzerland).

“I’m not saying I’m very good yet, but I love it! I really enjoy the training and I think in long course triathlon you do a lot more training and a lot less racing, and especially bike races stress me out to be honest. So I am happy to up my training, whereas some people prefer racing, but I definitely love my training.”

Emma’s triathlon training was difficult to fit in while she was bike racing, but since retiring, she seems to have got stuck in.

“I haven’t been able to swim much this season because I’ve been away a lot bike racing and you don’t have the facilities and the time or the energy to swim when you are at a ten day stage race, so I knew that I wouldn’t have much chance in a triathlon because my swimming is my weakest link, but I thought I’d have time to get into shape for the Zofingen duathlon.

“Since the Commonwealths I started running again hard, I’ve been doing some track sessions, and I’ve been doing less cycling because you can’t just add more training on top, but I think it’s a question of where you get the intensity from, and I needed the intensity in running for Zofingen so I concentrated on that and I’ve done lots of km’s on the bike and even some amateur bike racing, which I took my running shoes to. So after every stage – which was 130-180km stages in the mountains I would just go for a little run and that was good duathlon training. But now it’s a question upping my swimming as well and working on my technique.”

Emma was previously a runner before a cyclist… and some cycling tours involved including running shoes on the kit list, she says. “I’ve always loved running; I always took my running shoes to the cycling world championships and it has always been the first thing I’ve done the morning after the last race of the season, and then hobble home with sore legs because if you don’t run for nine months its painful!

“I’ve always loved running long distances – I hadn’t done a marathon until 2012 and then four weeks after the end of the season I did the Lausanne Marathon and there was a snowstorm, and my shoes were really old and knackered and I ran 2:55 which I was pleased at because the conditions were pretty rubbish!

“Then last year I did the Jungfrau Marathon last year, it has a big international field and it’s a mountain marathon and I came sixth there, which I was pleased at.

“After that I was using On trainers because mine were knackered and I had seen them and thought they looked rather cool and I wanted to give them a try, so I asked Oliver the On founder and he gave me a pair and I ran Jungfrau and Lausanne Marathon in them and won the Lausanne Marathon at the end of October last year in 2:44.” 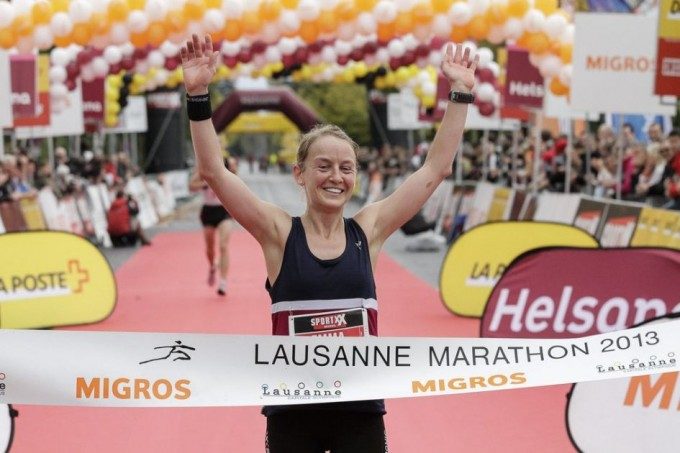 So the question is, will Emma become renowned as a professional in multisport?

She adds: “Professional is a funny word because in theory it means somebody who makes a crust out from the sport, but that will take a little while!”

So what does Emma think about the triathlon world so far?

She says: “I’m a bit ignorant of the triathlon scene because I’ve not been in it very long, but I don’t really mind, because all of the races I have been to everyone has been friendly and I don’t have to know who the famous pros are, because at my level, it hasn’t made a huge amount of difference as to how I race. I find the events really fun and friendly.”

“I think triathlon has a really good ethos because I think it’s a newer sport and it has been set up with the principle of equal distance and prize money – nobody takes up sport for the prize money, you take it up because you love it. The great thing about triathlon is that everyone does the same distance, at the Duathlon Champs I raced the same distance as the guys: 10km run, 150km bike and 30km run and on the same course with the same hills, and nobody assumes because I’m female I couldn’t do it and the guys don’t feel insulted because I’m doing the same race as them, it is just assumed in triathlon and that’s nice, it’s not like the sport says ‘We are so egalitarian’ but it is just assumed and it is normal and I think it’s the way it will eventually be in other sports.

“I’m sure triathlon isn’t the only sport; I think athletics has a similar ethos, but I do like that about triathlon. I want the chance to do hard races. I don’t want to do half the distance in a race or have an easier course because I’m female but in triathlon it’s normal that men and women do the same course.”