In 1989, six-time Ironman Hawaii winner Dave Scott produced a 2:41hr marathon on the way to smashing his course record by 18mins. Unfortunately for Scott, that other member of the Big Four, Mark Allen, had matched him every stroke, pedal and stride for 138-miles before breaking free with two miles to go to win his first Kona title at the eighth time of asking.

Scott’s grip on the Ironman Hawaii title may ended on that unforgettable day now known as the Ironwar, mere months after the first-ever copy of 220 Triathlon hit newsagents, but he’ll still been an undeniable force in triathlon throughout 220’s lifetime. Scott returned to Hawaii in 1994 at the age of 40 to place second to Greg Welch, and clocked a 2:45 marathon two years later to come fifth.

Since his retirement from racing, he’s become an elite coach (guiding Chrissie Wellington and Craig Alexander to Hawaii glory in 2011, and Britain’s Rachel Joyce to silver in 2013), a motivational speaker, a certifier of coaches and commentator. Always generous with his time (Scott’s a regular face at the Triathlon Show and will be appearing in 2014), we caught up with him in Boulder, Colorado, to talk 25 years of tri and why we shouldn’t rule out seeing ‘The Man’ return to the start line of Hawaii…

220: For you, what have been the major changes in triathlon over the last 25 years?

The number of countries that are competing worldwide is something that, during the 1980s, I never would have forecast. In the 1980s and ‘90s it was quite an elitist sport that you had to be fairly fit to do but there are entry-level events where you see athletes with a minimal background competing. In the U.S., where we have a lot of ‘robust’ people, it swings open this door to a healthy lifestyle.

Do you have your own triathlon hero from 1989 to the present day?

I don’t really have a hero but I have true admiration for people with perseverance and tenacity, such as Simon Whitfield, Chrissie Wellington and Rachel Joyce. If people knew what Rachel had to go through before Kona last year. A number of niggling issues became pretty insurmountable and arresting these injuries and maintaining her fitness, on paper, was disastrous. So getting second was an historic day! Erin Baker was also phenomenal – she’d go out on rides with the men and we had to be on our game to drop her. It’d take anything and everything we had!

Which is more rewarding, coaching or your own achievements?

Working with athletes can become a huge challenge, not just physically putting the training together but also emotionally because, at that top level, they have a very short-term memory! They have a good workout in the morning but a bad one in the afternoon, so they’ve already forgotten about the morning one!

So it’s not about prescribing what looks good on paper. I always ask the athlete ‘what has worked for you in the past?’ and I always like athletes to challenge me on everything. But once we get to the big races I find it extremely rewarding when they are successful. And when they are not it’s like a sharp dagger in my heart! I take it personally and that part isn’t easy.

So it is comparable to what I felt as an athlete. No one could control my fate better than myself. I didn’t have a coach or a mentor when I was racing and I found that I was my hardest judge and these athletes are the same. But now I’m their sounding board and take on their hardships, so it’s extremely gratifying when they do well. I don’t coach many people at the top because I can’t – I’d go nutty if I had too many!

Are you still coaching your son Drew?

Yeah, he’s a difficult one at times! He had a rough 2013 because of a stress fracture, meaning he wasn’t really able to run at all until about June. Drew’s now hopefully going to able to race to his full capacity. He’s got a bucket of potential, so we’ll see!

The UK’s had a lot of success recently but the US has struggled at the elite level. Why is that?

The US athletes as a whole may have been inconsistent – comparatively the Brownlee brothers are machines and fun to watch. I like their style; they’re aggressive as heck and dictate the races. They just smash it on the swim and continue to do the same thing on the bike, and then they just go flat out on the run. They’re two weapons! 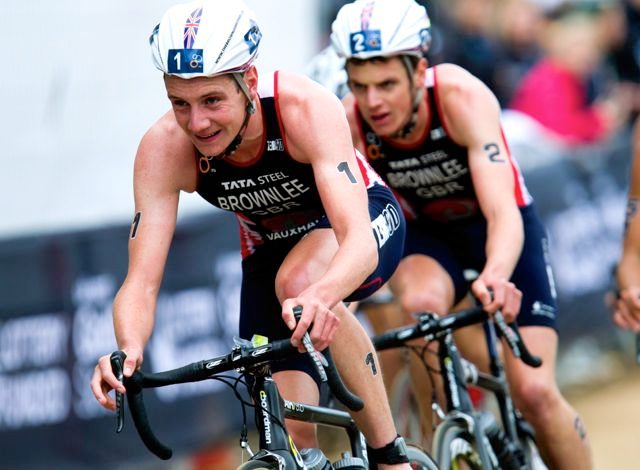 But is there something at grassroots level that’s preventing top US athletes coming through?

USAT may say contrary but I don’t think we have a great developmental programme in America. The schools and clubs aren’t saying, “We’re going to take these 11, 12, 13-year-olds and they’re going to do some great triathlon training.” There are pockets in the States where coaches have developed programmes and you’re seeing some young athletes – because they’ve had that opportunity – who are pretty darn good.

I’d like to see youth programmes in the schools system here, with things like high school triathlon groups. But we don’t really have a feeder programme [from high school] and looking at college runners who can swim is too late. That’s not the way to develop a full-term feeder programme. Gwen Jorgenson has done extremely well and the women’s team is strong but the men have been kind of spotty.

What changes would you like to see triathlon make over the next 25 years?

It’s pretty darn expensive, certainly here in the States, for liability reasons and prohibitively so. So we’re catering to a middle/upper class and we’re not really seeing minorities at all over here. That bothers me. We’re just driving it to an elitist segment, which is a big, big mistake. I’m hoping that we can cross that bridge and that there is funding for kids and adults to get in. It can cost you $100 bucks just to enter, not including hotels, etc, so a weekend in this sport is outrageous.

In terms of elite racing, if the prize money was equitable between men and women that would be a great thing. To get the big sponsorship there’s got to be a Grand Prix super series, and if we had pro-only events for certain races; I don’t want to negate the opportunity for the age-groupers but Tiger Woods doesn’t play with 400 amateurs!

So I think there’s got to be separate events that are also appealing to spectators. A lot of the venues right now are just horrid! So we’ve got to create venues that are exciting.

One of the other things that bothers me is that they [long-distance race organisers] are trying to do these staggered starts. So you could think you’ve won but someone who started 20mins ahead of you could have won and you never even saw them. That’s nonsense to me, so either they limit the size of the field or they manage it better.

I can’t see fields being reduced if organisers know they can fill them though. What are the crowds like an American Ironman races? The most successful European races like Challenge Roth have got the local community involved.

There’s the new Ironman Boulder this year and the course is the regular route that athletes ride anyway. It’s nice rolling farmland around a lake, but then they take you out east into nowheresville and the people out there have no interest in this event. I just hope that the athletes aren’t going to get hit by a farmer who has no idea that there’s a race going on. It’s also just an out-and-back on the run, so it’s gonna be chaos, with skateboarders and people walking their dogs.

So people ask me if I’m doing Ironman Boulder and I say ‘no way’! If I did an Ironman again, I’d consider Hawaii first as I want to go where the crowds are. I’ve done enough training days in my life that I want people to say, well he’s a little old but Dave’s looking kinda good!

So the lure of racing Hawaii is still there for you?

Yeah, if someone paid me a lot of money! Seriously, though, I’ve got a host of injury things, I was hit by a car four years ago and got hit by a truck again seven weeks ago! So I wouldn’t want to go in and do it haphazardly at my seasoned age – I’d want to go in and be respectful. So I’ll say it’s always open.

Dave Scott will be appearing at the Triathlon Show from 28 Feb-2 March in Esher, Surrey – more details here

Will the new tri documentary, Beyond Human, prove addictive viewing?

Over 2,300 athletes to compete at Kona Ironman World Championship