“Racing through a postcard” was how the organisers put it at the race briefing. Nobody at the finish line on Sunday would question the validity of that statement. The 113km they’d just pushed themselves through were some of the prettiest you could hope to swim, cycle and run in. Yes it had rained a bit, and yes it had been challenging, but the challenge was all part of the fun.

Zell am See in Austria will host the 2015 Ironman 70.3 World Championships. This is big news and quite an honour for the little town – it will be the first time the Ironman 70.3 World Championships have been held outside North America. It’s easy to see why they chose the location: a crystal clear lake to swim in, mountain views throughout the race and Austrian hospitality (and carbs) in abundance.

With 100 qualifying spots up for grabs for next year’s World Championship event, things were very serious at the front of the race. Meanwhile, at the back, it was a more relaxed affair. I had travelled to Austria as part of a group of six. Between us we would make up two relay teams and one of our party was doing the whole 70.3 himself. Only two of us had done a triathlon before. Our aim for the weekend was to have a good time and finish the race. 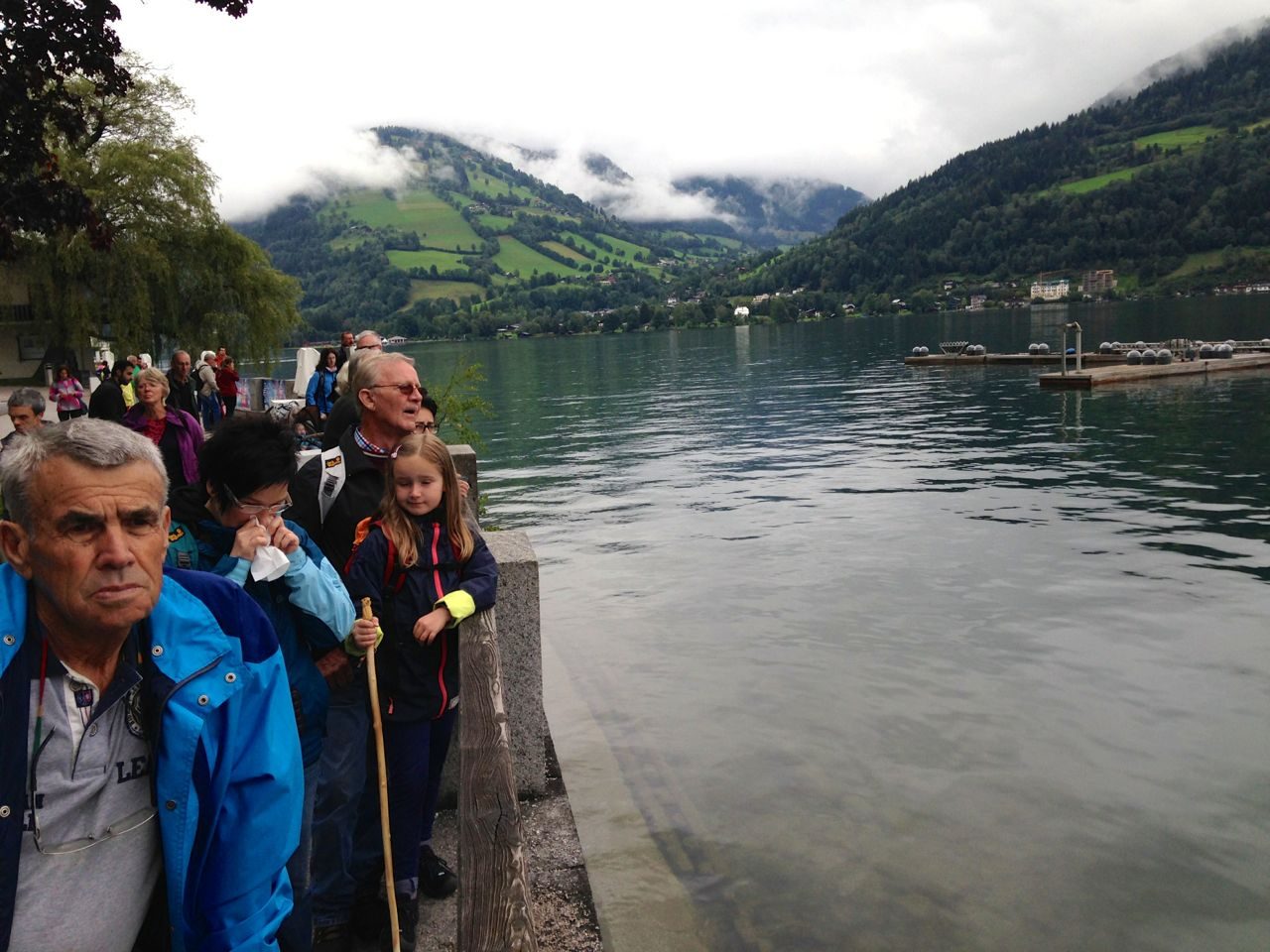 The swim waves got underway from 10am. The triangular course took the swimmers towards the town before turning back from the start to the exit. From the town you could see and hear the swim start, and a crowd gathered to cheer on the competitors. Clouds sat on the top of the mountains surrounding the lake but didn’t detract from the magnificent surroundings.

As the last of the competitors exited the swim those same clouds started to break and make a challenging bike course even trickier. There is just the one real climb on the course – but it’s a big one. From an altitude of around 650 meters, you climb straight up to 1292 meters all within less than 15km of road. Of course you’re rewarded, not only with a quick descent, but also with a stunning alpine view if you can take your eyes off the tarmac for a few moment.

The swim start and transition are all at the same place just a kilometre from the town, which made race-day logistics easier.

I was taking on the run leg for my team and when my very wet cyclist arrived into T2 he was grinning; partly because his 90km ride was over but also because he’d had fun out on the course. 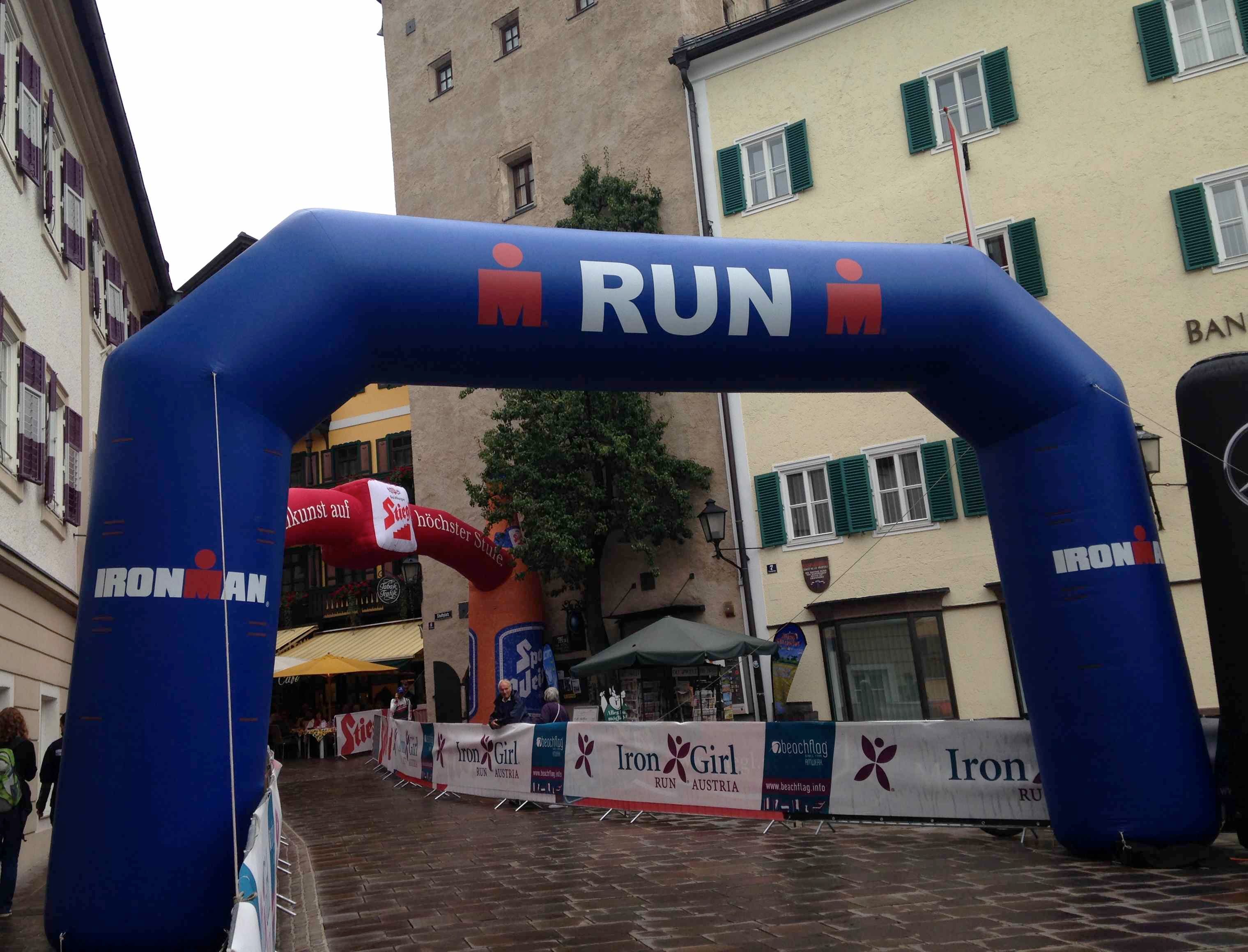 The run took us up towards Zell am See where we began a two-lap route following the edge of the lake to a small town called Thumersbach (looks like ‘turn back’ to a weary triathlete) and back twice. If you don’t like alpine lakes and mountains, a relatively flat run, a pretty Austrian town and lots of vocal support, then you probably shouldn’t do this race. As we headed back towards Zell am See for the last time I tried to take it all in and made a few promises about never using a treadmill or turbo again when there is so much scenery outside.

Marino Vanhoenacker from Belgium took the win for the men in 4:02:32, while Austria’s Eva Wutti gave the home crowd something to cheer about with a win in the women’s race finishing in 4:28:35. Meanwhile, all six of my party finished with my relay team clocking a 6:20hrs – not bad for a ramshackle, largely novice squad.

Next year an open race will run on the Saturday alongside the World Championships which will take place on the Sunday, so the day after you race you can park your tired legs next to the lake, grab some Kaspressknödel (potato dumpling with cheese – food of triathlon champions) and watch the pros.

Did you race in Austria last month? How did you get on? Let us know in the comments!