As places to train go, the BEST swim centre in Colonia Sant Jordi, Mallorca, is pretty much every swimmer’s dream. Not only does it centre around a 10-lane 50m outdoor pool, but the centre is founded and run by two Olympic swimmers – James Parrack and Matthew O’Connor – so expert knowledge abounds. Plus not only that, but the town is on a peninsula with a selection of beaches and coves around it, making it ideal for open-water swimming.

It’s no surprise then, that the centre makes the perfect location for a swim festival. Every year swimmers congregate for Bestfest, seven days of open-water swimming, pool coaching and fun with fellow athletes from all over the world – and when 220 were invited out to experience the new 1.9km and 3.8km tri-distance swims, it was too good an opportunity to miss! 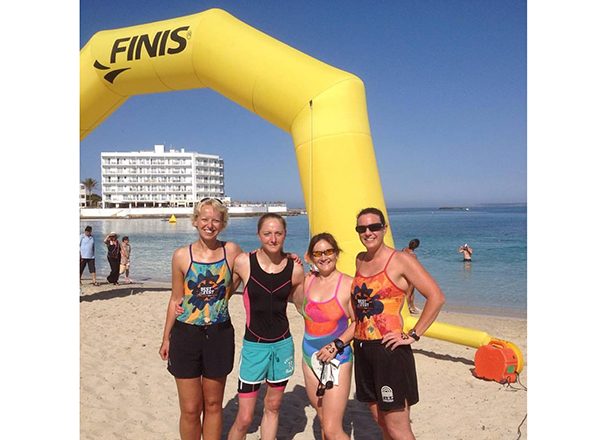 We arrive in the town partway through the week and many of the athletes have already taken part in distances ranging from a 1.5k to 4.5k sea swim. One race – the 5k – had to be cancelled due to choppy waters, but with a whole week and plenty of events to pick from, nobody seems too concerned about that!

I’ve got two days before my race, so I take part in a couple of pool and open-water training sessions with some of the centre’s resident coaches. We work on drills, pacing, sighting, dolphin dives, turning round a buoy and how to run in shallow water – basically everything we might need for the upcoming races!

My race is on the Friday, but on the Thursday I’m lucky enough to be there to watch the week’s longest races – the 7k and 10k ‘Colonia Classics’. There’s a strong field too, with the GB Open-water swimming squad in attendance, as well as several other elites from around the world. Rio-bound Jack Burnell is there being filmed for the BBC Olympics coverage and is a strong favourite. In the end the three-lap course is pretty tight and there’s a run to the finish between the top three athletes with GB’s Caleb Hughes just edging the win from his team-mate by 00:00:02 – nail-biting stuff!

Friday comes around all too quickly – and my race with it! Regular 220 readers will know that I’ve only learn to swim in the last couple of years. I absolutely love the open water though and have been working hard to improve my skills, so have opted for the full 3.8km rather than the 1.9km. My previous longest was the 1.9km swim at Hever Castle’s Gauntlet last year, so this marks quite a step up. 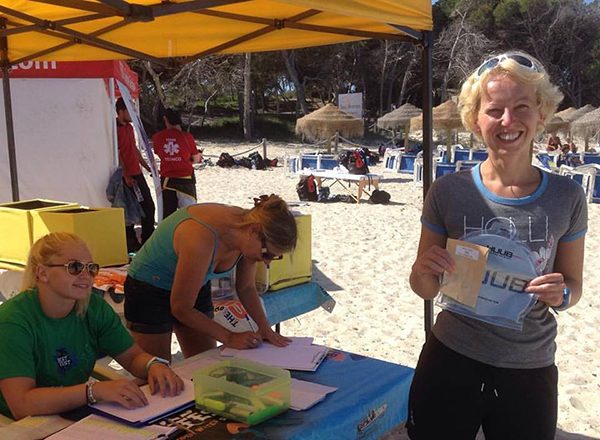 Luckily though, the conditions don’t look too choppy today. Talk of the waves earlier in the week have made me a bit nervous, but although there’s some breeze, the sea looks relatively calm. Come 3pm and I’m hiding in the shade of a beachfront café on the pretty Cala Galiota beach, zipping myself into my wetsuit. Most of the field are in skins, but I’m taking all the help I can get for this one!

I’ve made some great friends already on the trip and my new buddies from the Myrtleville Swimmers in Ireland are also competing (and acting as my support crew/photographers!), so we walk to the start together. By now we’ve found out that the sea is in fact ‘a bit lumpy’ further out, so the course has been modified and is now four smaller 950m laps of a triangular route, rather than two big 1.9km ones. 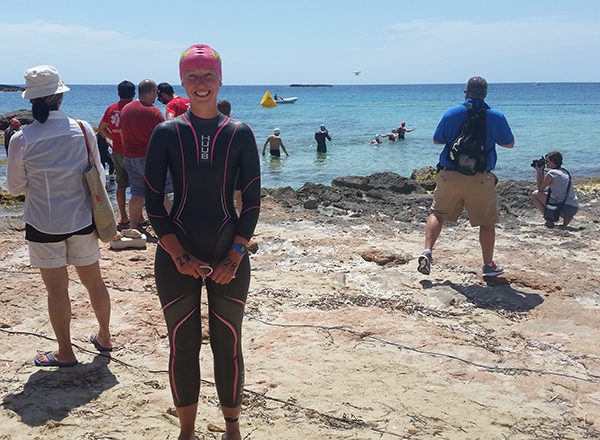 It’s a deep water start so I line up alongside the others and at the klaxon I’m off – excited to be swimming and getting on with it after all the nerves! We head out to the first buoy and the conditions seem reasonable – although turning left around it on to the top straight and things get a bit bumpier. The waves are coming towards us and I’m trying by best to roll with them and seem to be doing ok – there are still swimmers around me, anyway!

We head back to shore and swim around two more buoys to take on lap two. Here the waves seem to be bigger (although maybe that’s because it’s the second lap!) and I’m starting to get thrown around a bit. I’m enjoying myself though and am marvelling at the elite swimmers shooting past me. Their technique is just brilliant to watch and while I’m struggling to keep on course, they glide like fish around me. Jealous isn’t the word!

Finishing lap two and the 1.9km swimmers head in to the finish line, while I crack on to lap three. It’s starting to feel a bit tough, but I tell myself to just keep going – if I finish three laps, that’s still a new ‘longest distance in open-water’ PB for me! By now the stretch out to the first buoy is getting choppier and I’m finding the top straight quite tough. The third lap seems to take forever and part of my brain is telling me to quit while I’m ahead. Luckily though, the bossier part of me is determined to finish and makes me swim around the bottom buoys again to take on lap four, rather than quitting!

This is where things get a bit ‘interesting’ as fatigue and the (still increasing) waves combine to make me wonder if I’m actually moving at times. The sea is so clear that you can see right down to the bottom though and I’m encouraged to see the rocks moving so I know I’m making progress – even if I’m finding it near impossible to sight and feel more like I’m surfing than swimming at times.

The support crew are truly fantastic though and by this point I’ve got a couple of kayaks with me for company (one of the perks of being at the back!) which is massively reassuring. Little by little I inch towards the finish until I finally get out of the chop into clear waters and swim to shore. Standing up far too quickly and trying to run I slip over a couple of times, but it’s a great feeling hearing the crowds cheer and race director, James Bainbridge, calling me in over the tannoy! 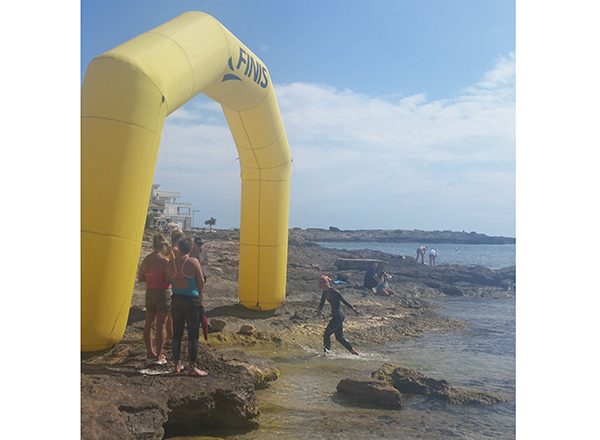 My final race time turns out to be 01:41:23 – but that’s a PB and I’m so happy to have completed the challenge I set myself (even if it won’t be troubling anyone at Kona any time soon!) and I hope it shows that even newbies can make huge steps with their swimming with a little time and dedication. Plus I’ve got one day left in Mallorca so have time to enter the fun relay races on the Saturday – a great ending to the week and a chance to have a final swim with all the great people I’ve met on the trip.

Race director James tells me: “A week long programme comprising eight events in seven days takes a great deal of planning and execution. Luckily we’re blessed with dedicated and hard working volunteer staff, without whom Bestfest just wouldn’t happen. I’m proud of what we’re achieving in our little corner of Mallorca, we love meeting new swimmers and also seeing familiar friends return to swim with us and hope that our success this year will be a stepping stone for 2017 and beyond!”

For anyone wanting to work on their swimming ahead of an Ironman or long-distance tri, I’d definitely recommend this week. I’ve had a great time, achieved what I set out to and made some brilliant new friends. It’s safe to say that Bestfest deserves the ‘best’ in its name!

To find out more about training at Best Swim Centre visit the website here, and for more about Bestfest see here. Thank you to all the Best Swim Centre team for looking after us during our stay and to the Universal Hotel Cabo Blanco and the Bluewater Hotel for our fantastic accommodation.