Flying in the day before from Gatwick with a complexion translucent enough to make the Invisible Man jealous makes attempting a half-iron distance race in Antigua as sensible as facing local fast bowler Curtly Ambrose without wearing a helmet. In other words, it can do your head in.

SoI don’t. I throw in the beach towel, not the tribars, borrow a bike from the local cycle club in St John’s and opt for the SuperSprint-ish 500m swim, 10km bike and 2km run instead. It might be the only other multisport option, but in a world of braggarts where longer always equals better, this is a dramatic come down – both in distance (and social media standing) – and as the 11, yes, count them ELEVEN, triathletes stand high-fiving in the waist-deep waters of Morris Bay before the start, my guilt is tinged with envy that I’m not among them. It doesn’t last long.

To describe the AUA Rohr Tinman triathlon as a mere 1.9km swim, 90km bike ride and 21.1km run, hardly does it justice. It’s more throwback to tri in its infancy when it cost a pittance to enter and you sweated over whether mind, body and frameset would emerge intact. This isn’t to say the road surface is poor but Neil Armstrong (whose first lunar broadcast was first picked up in Antigua) would have dismissed the moon’s craters as innocuous divots had he stood on this coastal highway.

Not that this is meant as criticism of a unique event now in its fifth edition that is less race and more heartfelt memorial to one of its founders. Jonathan Rohr, a medical student at the American University of Antigua, tragically died in 2011 at just 25 from a rare heart disease, hypertrophic cardiomyopathy. Race director and friend Rory Butler says next year’s contest will have a name-change to Rohrman in his honour and Jonathan’s father in handing out the awards also pledged to compete every year in the shorter

distance events. “It’s the best memorial you could ever give a great kid,” Jonathan Snr says. “He wanted to prove to everybody he could be successful at triathlons and go to medical school at the same time.” 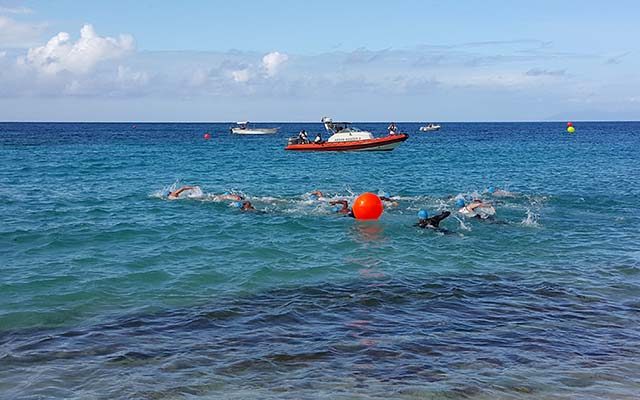 The two-lap swim is uneventful apart from the sight of France’s former professional Benji Sanson rounding the final buoy before heading for the wrong shoreline and adding a couple of hundred metres to his effort. He still emerges 6mins clear of his nearest – and let’s be honest – only rival, Francky Favre, of Martinique. After both deliver solid bike rides, Favre claws back nine minutes on the run to win in 4:20:26. The enigmatic Sanson, who coaches in Bordeaux is magnanimous in defeat: “Listen my bro, he’s the Caribbean champion. Respect. Christmas was yesterday and I was on the wine, the foie gras and the oysters.”

Over the next few hours the rest troop in. It’s attritional stuff. Andy Croft from sunny Lincoln  flies the GB flag with a credible fourth in 6:33:18 and last man barely standing Jerome Henry completes a long day in 8:12:02. By this time the relays, the kids races, my supersprint tri (completed just in time to duck into the 5km fun run too) are all done and dusted, the reggae tunes are pumping and the rum punch is flowing. For more information visit: http://www.antiguatinmantriathlon.com/