I’m slumped in T1 with a face swelling from a jellyfish sting and a tri-suit smelling of wee. I’m probably the least welcome sight Cannes has witnessed since Mickey Rourke visited the film festival in his hellraising 1980s pomp. Ahead of me lies the toughest Olympic-distance (ish) bike route I’ve ever witnessed.

Time then – after breaking my transition record of 8mins – to man up and start chasing down one Frederick Van Lierde, he’s got a 3hr head start after all.

As maiden races of the tri season go, April’s Cannes Triathlon is a smart option for any Brits impatient for some open-water race action. A short hop to Nice on the Easyjet and the mercury has jumped by 8C to near-perfect racing conditions; warm but not too humid, with a breeze to sooth the tiring limbs (and jellyfish stings).

As well as always thank the marshalls, one of 220’s race rules is to recce the bike course before race day. This proves to be a both a blessing and a curse in Cannes, with the mood in our travelling camp going from delight to disquiet as the bus driver circumnavigates the 50km bike route above Cannes without managing to find a flat piece of road.

Travel sickness avoided, any lofty pre-race plans of avoiding the final results page are replaced by a list of excuses for a sub-par performance the next day; the hire bike’s brake levers on are the reverse sides to usual (no 14) or the boulangeries en route smell far too good not to stop at (no 26) being just two of the 34 examples.

Cut to race morning and the pre-race nerves are replaced by the adrenaline rush of a mass swim start of 500 medium distance (1km swim/50km bike/8km run) athletes heading into the Palm Beach waters to the sound of European techno. It’s so exhilarating that I forget to put my goggles down for the first 50m before finding myself a space out of trouble on the left.

I’ve established something approaching a rhythm by the first buoy before what feels like an electric shock slashes across my face. My response is far more blue than David Cameron’s recent ‘Ouch, ouch, ouch’ jellyfish encounter and it’s enough to leave me dazed and confused.

Barring my lips swelling up like I’ve had an injection of Botox (probably apt given we’re at the home of the Cannes Film Festival), thankfully the rest of the swim passes without incident, with the hugely buoyant Dare2Tri wetsuit keeping me afloat in the chilly (14C) yet azure waters. 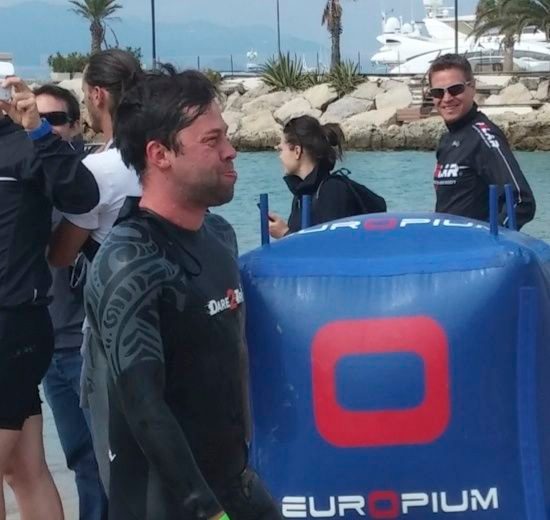 I stagger out of the water to begin my 8min T1 sojourn, having a sneaky wee while I’m still in my wetsuit and head to my beautiful rental bike, the Look 675 (the Julia Roberts to my Lyle Lovett). Knowing that the reigning Ironman Hawaii champ and Cannes Tri ambassador Frederick Van Lierde is just about still on the course in the Long version (2km/80km/16km) is enough to put a kick in my cadence as I tackle the 7km climb out of Cannes. My heart rate hits 94% of max on my Polar V800 but my fairly small frame sees me manage to pass a number of athletes on the ascent… only to see them fly past me at 60km/h on the declines.

Thankfully the roads are partially closed to the erratic French motorists from the day before and the scene is more Last of the Summer Wine than my pre-race visions of Mad Max, with spectators and drivers alike shouting ‘Allez, Allez!’ The game of overtake on the ascents/be promptly passed on the descents continues for another 40km, with any beautiful views spoilt by having to concentrate on the next rapid ascent.

After 815m of climbing over the 50km, it’s back into Cannes for the flat 8km run along the famous Promenade de la Croisette. The 200cm total of climbing is a welcome relief and I trundle along at 5min kilometres to cross the line in a mammoth 3:41hrs, splat in the middle of the final page of results and almost identical to the time it took Van Lierde to finish his 2km/80km/16km race. 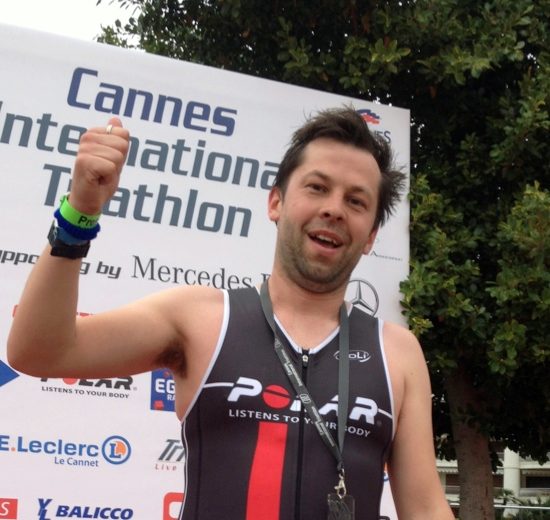 The trip has also afforded me a race day opportunity to test a beta version of the new Polar V800 multisport watch. As a man who ‘trains by feel’ purely because he struggles to operate anything more technical than a three-function Casio F-91W (the watch of both trendies and Al Qaida, apparently), the V800’s triathlon feature provides a wealth of data with barely the need to touch a button. 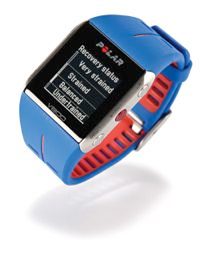 The data with Polar’s much-touted personal analysis tool also fascinates, telling me that I need 389hrs of steady recovery following the race. Which sounds like the perfect excuse to become reacquainted with Breaking Bad Season 2… if only I didn’t have some urgent swim/bike training to do before the Slateman first.

For more on Polar’s V800, head to polar.com. And go to cannes-international-triathlon.com for more on the race.