Last March saw one of our biggest ever monthly competitions on 220 Triathlon, with over £7k worth of triathlon kit and a spot on Team Superfeet for the 2014 race season to be won. 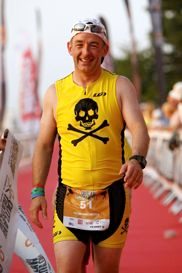 Tell us a little about yourself: I am a certified 100% midlife crisis triathlete. As I approached 40 (five years ago), I decided it was time to actually get fit rather than just talk about it, so I started running and entering events such as Survival of the Fittest. The following year brought the mandatory race bike and lycra and then finally the swimming lessons.

Since then it has been more events, swimming in freezing cold lakes and longer distances. This year my goal is to complete the UK Ironman at Bolton. The best outcome apart from my improved health is that my children (9 and 13) have started doing triathlons. I’m currently midway through my triathlon coaching course, which will allow my local triathlon group, Ribble Valley Triathlon Club to launch a junior group.

Favourite tri element: Bike … although I must confess I now love swimming as well.

Other interests: I like most outdoor sports, including skiing and mountaineering.

Interesting fact: I’m a 3rd dan and coach in judo.

Why you are happy to be part of Team Superfeet: I enjoy being part of a group who want to improve themselves and push their own boundaries whilst having fun. I’ve found triathlon an incredibly friendly and welcoming sport and I’m pleased to be part of a team that can help promote this.

Tell us more about yourself: I first started triathlon in 2009 when I did the rowers’ revenge with a group of friends from my rowing club – I had only bought my road bike three weeks before and despite a rather uninspiring performance I loved it!

I stopped rowing two years ago and have since been focusing on sprint distance triathlon. My greatest achievement to date was qualifying for the Aquathlon World Championships in London last year. The event was such an amazing experience and it felt great to have people shout my name as I completed the course!

Goal for this year: To qualify for the 2015 European Sprint distance Championships.

Favourite tri element: I usually compete at sprint distance and am hoping to do my first Olympic distance this year. My favourite discipline is the bike leg and like all triathletes I am desperate to get a new go-faster bike!

Why I entered to be part of Team Superfeet: At the world champs in London my wetsuit split all the way across the back just before the race!  I saw that Superfeet were giving away an Aquasphere wetsuit so it was just what I needed. I hadn’t quite realised the prize also included being part of Team Superfeet but am so glad it did and am really excited for the season ahead! 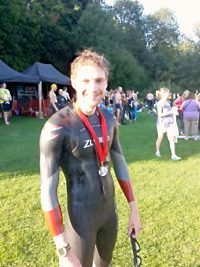 Tell us a bit more about yourself: I started triathlon as I was looking for a new challenge and the idea of open water swimming terrified me! My first triathlon my girlfriend actually overtook me doing breaststroke which gave me plenty of ammunition to get back out there and try again!

Last year I got to compete in the World Aquathlon Championships at Hyde Park, something I’d definitely like to do again in the future.

Goal for this year: I don’t really have much time for training in three disciplines this year so will be focusing on swimming and aquathlons. I would  like to do some longer open water swims and keep working on improving my swim time.

Favourite tri element: After getting over my fear of open water ….. Swimming!

Fave food: I love porridge with peanut butter – perfect for breakfast or after a hard training session

Why I entered to be part of Team Superfeet: I saw the competition when reading 220 Triathlon and thought it looked like an awesome prize. I thought it would be a great opportunity to be part of a team that is for everyday triathletes who compete as part of a busy life.

Good luck to all the athletes on Team Superfeet for the 2014 season, we’ll keep you updated on their progress!