London-bound on the M4, and as the first flyover signals entry to the urban jungle, it’s tricky not to notice the imposing GlaxoSmithKline building to your right. Just across the carriageway from the pharmaceutical giant’s HQ lies an unremarkable industrial estate, where in Unit 2 the masterplan for Britain’s gold rush in Rio is being laid out.

The outskirts of the metropolis might seem an unlikely place for breakthroughs in elite endurance sport, yet if British Triathlon’s gold and bronze from London 2012, or England’s five medals from a possible seven in Glasgow, are to be bettered in two summers’ time then the fine tuning of the GSK Human Performance Lab could play an essential role.

It is in this testing environment that 220 finds itself as a lab rat, wired up on a spin bike in 30ºC and 30% humidity to replicate the likely conditions the Copacabana coastline will throw up for the swim, bike and run spectacle.

Trying to push out five watts per kg ends, predictably, in a pool of sweat, lungs burning from 12 minutes exertion, as lactate testing results in a mess of bloodied tissues and non-sustainable effort. A glance left and reigning world champion, Non Stanford, having completed the same task, is spinning away with a healthy glow. 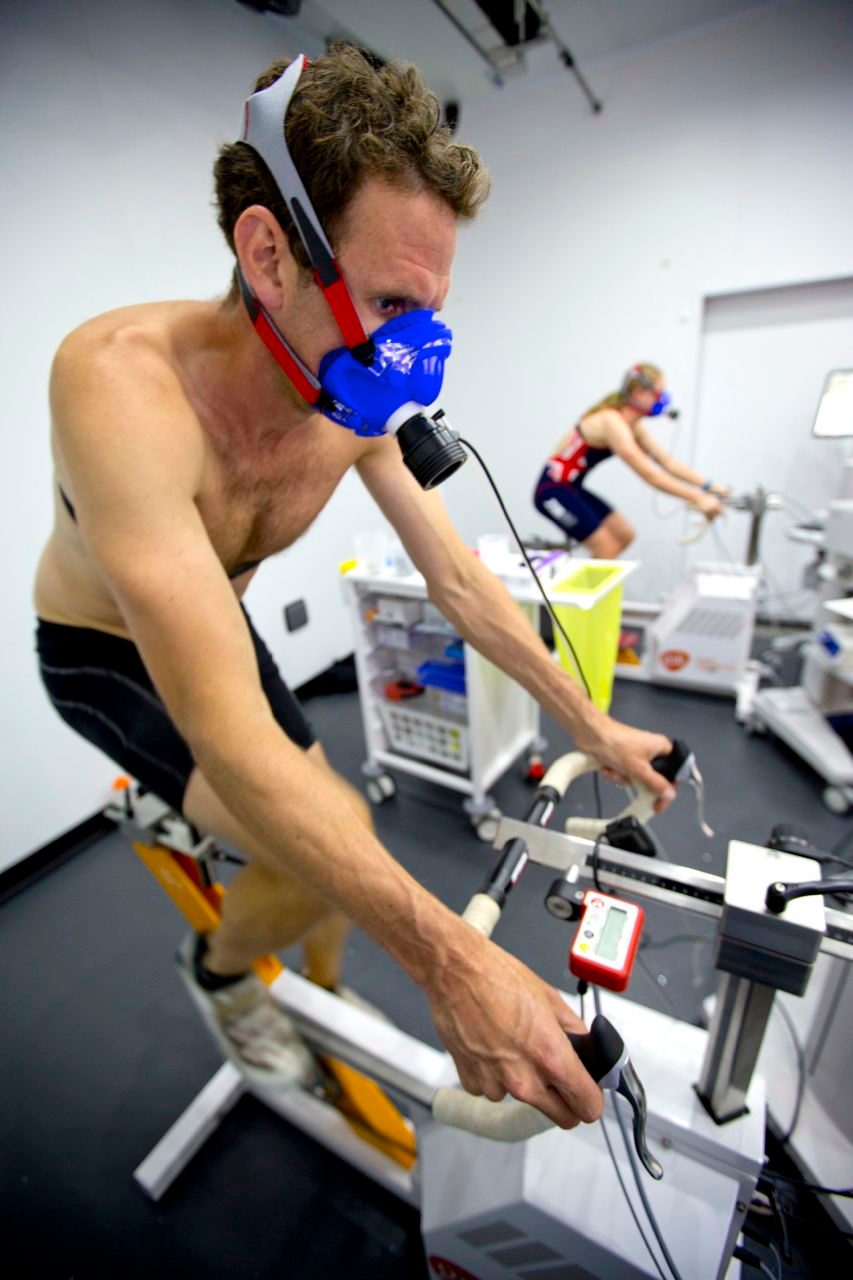 It is the second time in an hour that this middle-aged journalist has donned a face mask and succumbed to ritual humiliation by an elite triathlete. The merciless flume of an endless pool is the initiation, where swim efficiency is compared to Lauren Steadman, a 21-year-old veteran of two Paralympic meets now switching to win gold in the Tri4 class in Brazil. 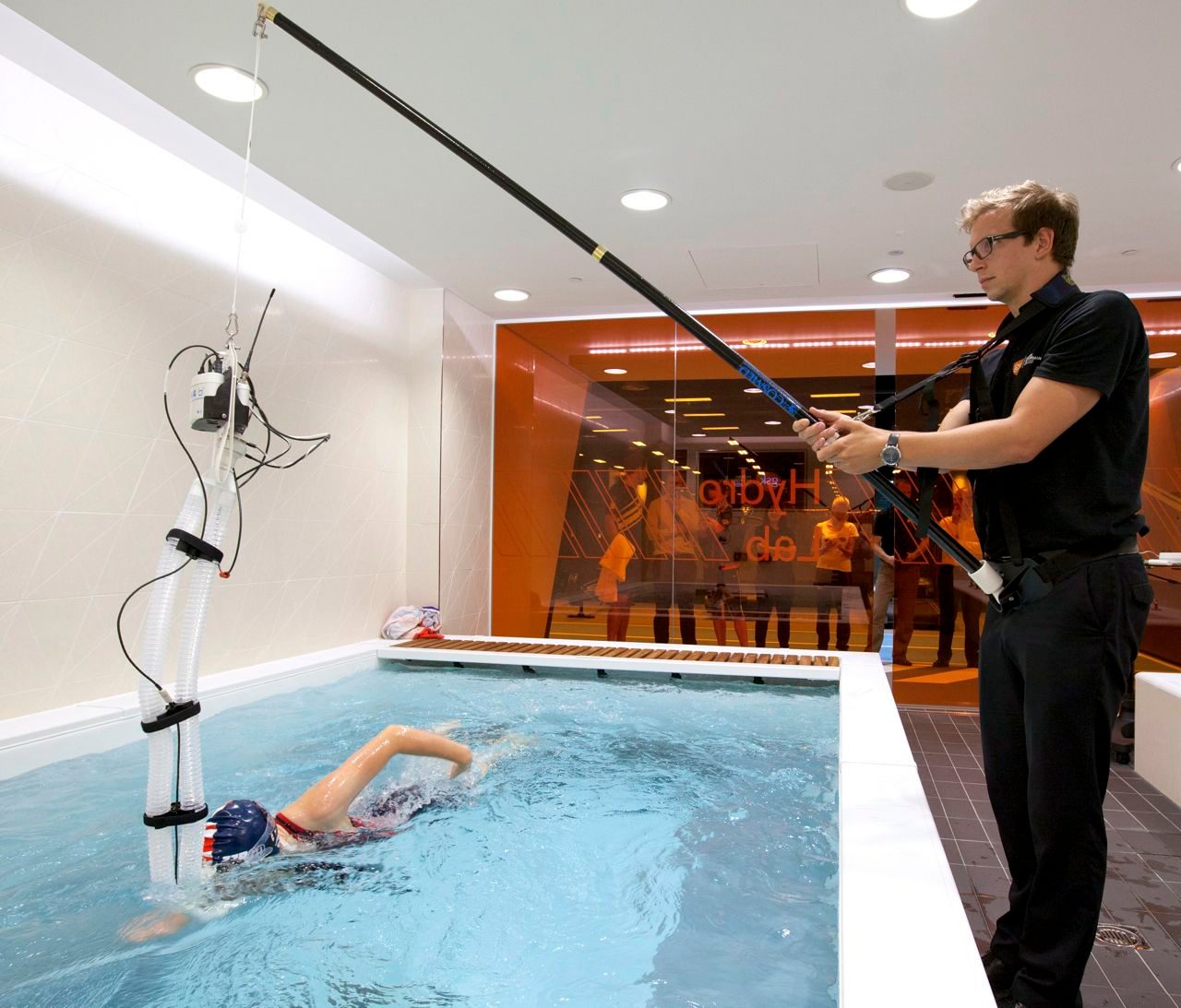 Exercise physiologist Matt Furber uses a rigid pole to suspend the breathing apparatus clear from the swinging arms, allowing Lauren to demonstrate her streamlined technique and 220 to flounder like a prized pollock hooked through the gills.

Aside from obvious mismatches, the morning affords the chance for GSK to show-off some world-class facilities, its intention being to enhance six core pillars of human performance: strength, stamina, cognition, hydration, metabolism and recovery.

Alongside the static bikes, an oversized treadmill can be accelerated to 80kph and raised to a 25% incline with variable humidity and temperature. An adjacent wet lab examines the clinical evidence, a hydro lab provides swim analysis and plunge pools of varying temperature for recovery.

The gym set-up looks normal except hi-tech force plates in the floor measure explosive power. A cognitive training suite is ready to fast-track skill acquisition and circumnavigate (or debunk) the ‘10,000 hours’ rule, and, in a side theatre, a body composition pod (think Sandra Bullock in the final throes of Gravity re-entry) measures fat percentages and muscle mass. 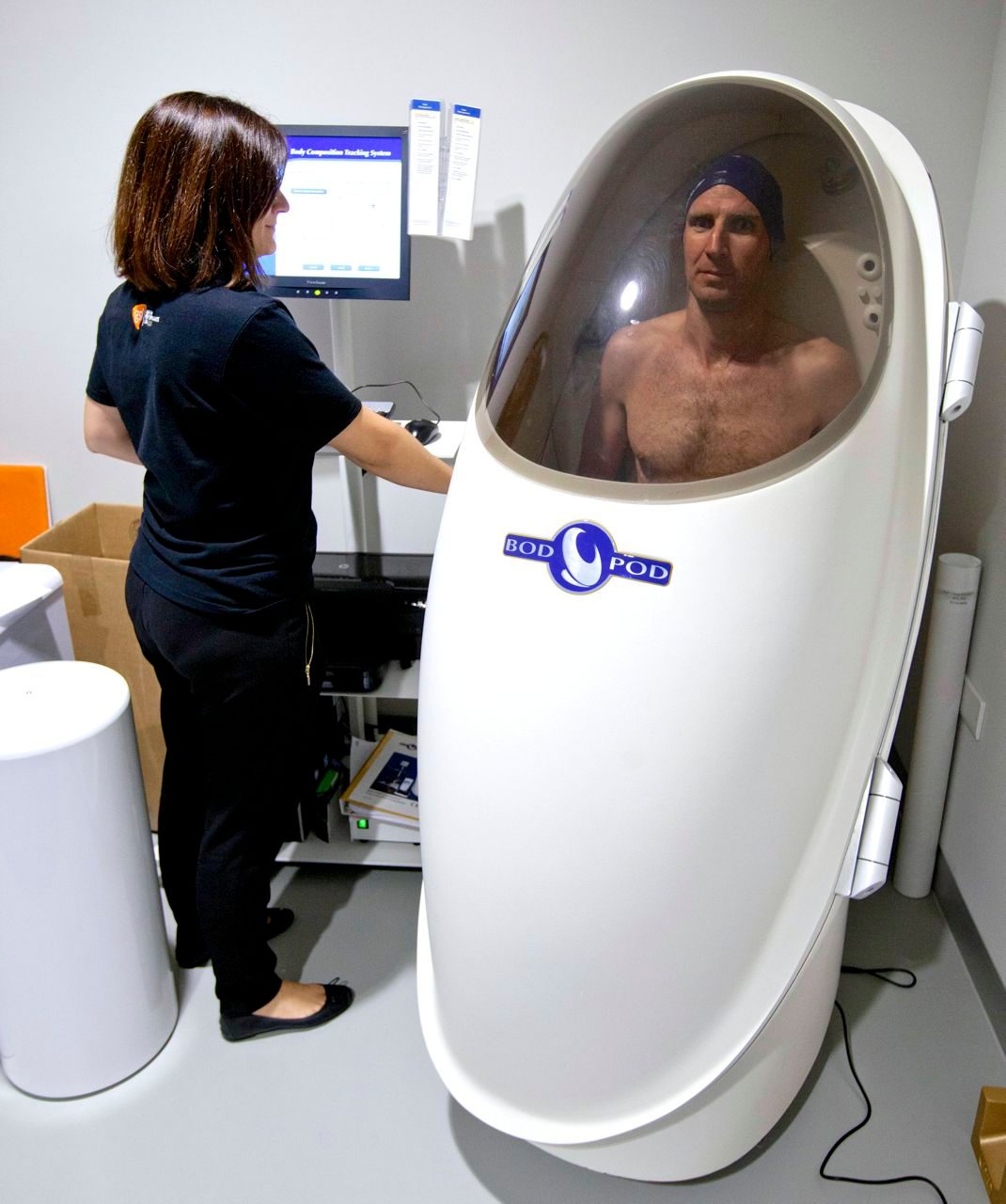 GSK admits it does not shout about this place as much as it might. On closer inspection of the Brownlees’ spandex you might spot a direct link, but the Yorkshire brothers are the only individuals directly sponsored. Other partnerships include national sporting bodies such as British Triathlon and GB Canoeing, Premiership rugby clubs, Wasps and Harlequins, and support to polar explorers like Richard Parks and Ben Saunders.

Once considered, there is a very evident symbiotic relationship – all parties benefit from the data returned. The athletes are analysed in training and recovery to optimise performance and the same feedback allows GSK to develop its own products, chiefly sport brand Maxinutrition, but also prescription medicine, consumer health or wherever the research might be applicable. Additionally, it’s regularly levelled that sports nutrition is marketing over substance, so although it’s not a line to be dragged from GSK, if the products on the shelf are informed by the human performance lab, it must add to the credibility. 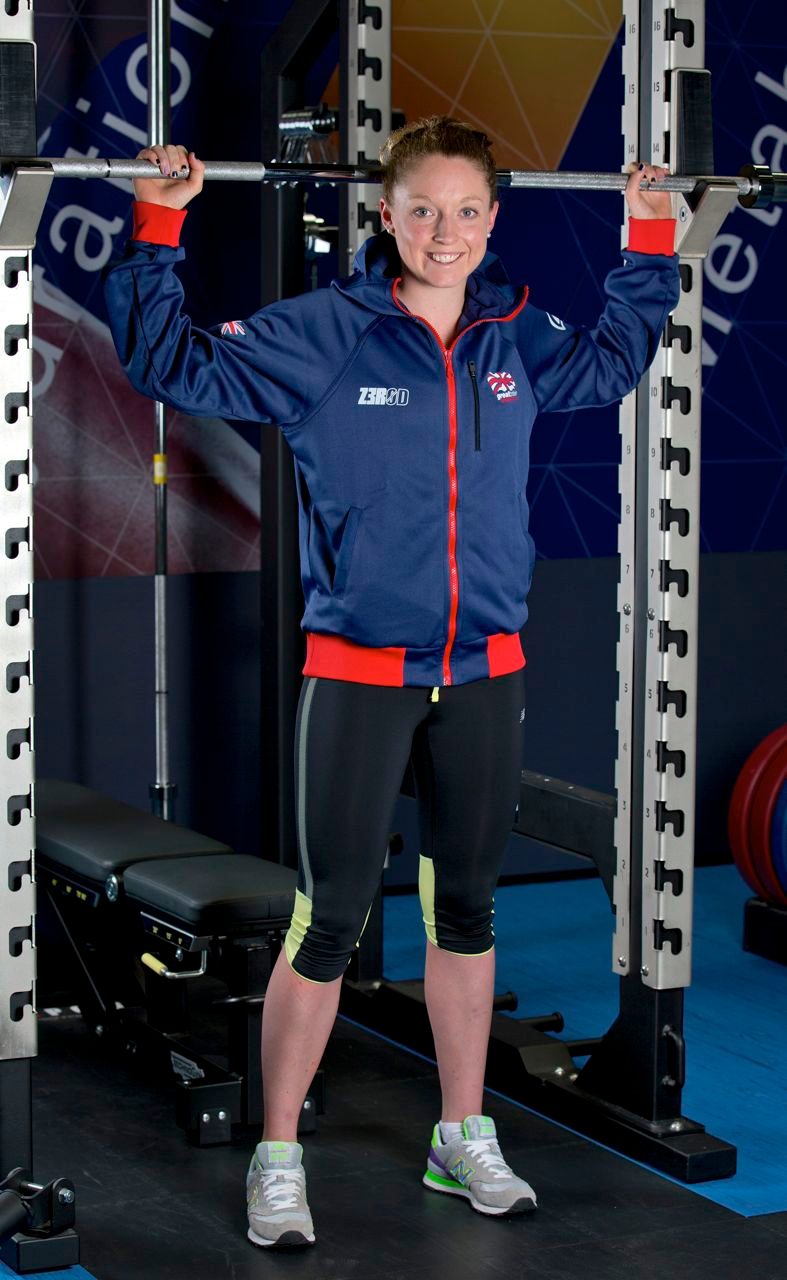 Importantly, GSK does not face the financial constraints that hamstring most support services for Olympic sports; with revenue of £26.6billion last year, it’s bringing in fractionally more than British Triathlon. It also means it’s a talent draw, enticing the likes of research and development director Ken van Someren, who was formerly head of science at the English Institute of Sport during London 2012. His five-minute tour extends to an enthusiastic half-an-hour, discussing all aspects of the lab and where the marginal gains can arise. 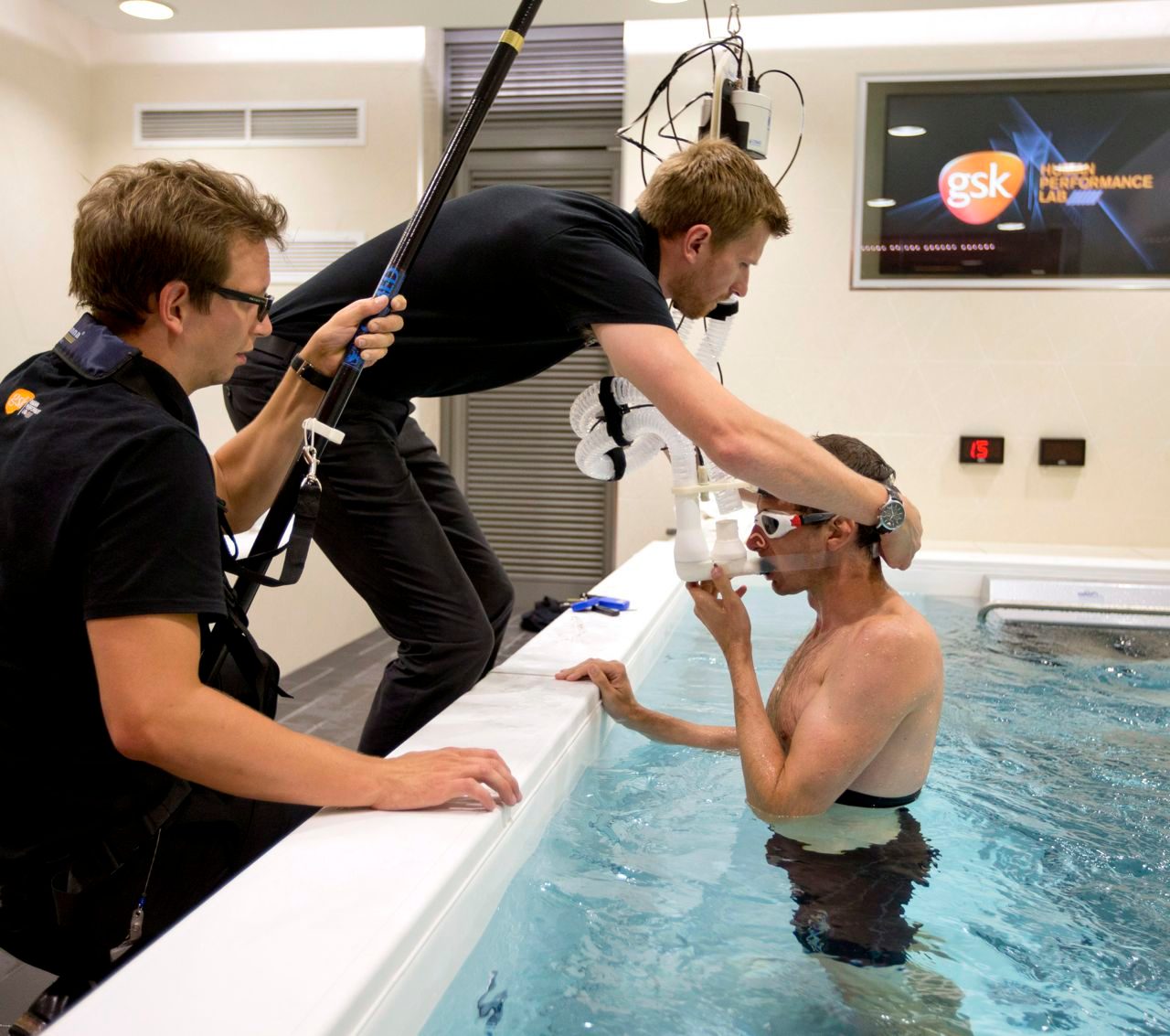 It’s a haven for sports scientists with not only the right equipment all in one place, but with guinea pigs prepared to push themselves to breaking point for the cause. Take Shusanah Pillinger, who GSKHPL recently supported as she attempted to become the first British women to complete the brutal Race Across America (RAAM) solo. The fuelling strategy was such that despite pedalling 2,145 miles in almost nine days, she lost just 1/2kg of body mass.

Of course, science cannot negate all the risks and a shattered collarbone after falling asleep at the handlebars would see a premature end to this attempt. Pillinger will no doubt return but her example highlights perhaps the only drawback with a facility of this kind. However much you try and replicate the environment in the field, outside the lab the world of endurance will always throw up something unexpected.

Too many triathletes can be sucked into the dangerous trap of believing leaner is better, but excessively shedding fat brings a number of health and injury risks.

Faye’s 22.7% is optimal for an elite woman performer. Anything under 18% could set off warning signals of an impaired immune system and stopping the menstrual cycle, a condition known as amenorrhea that can weaken bones due to insufficient oestrogen production. 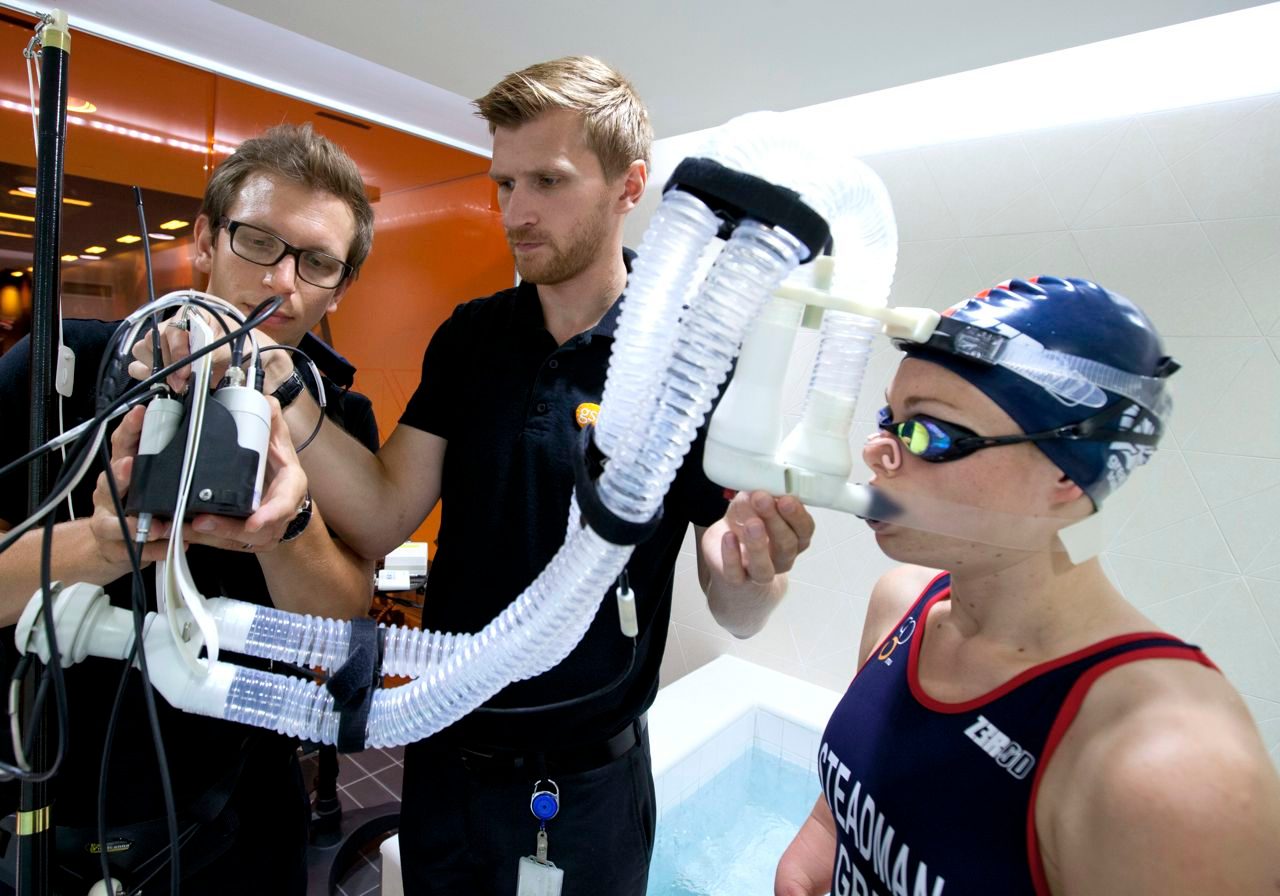 The Relative VO2 results show how many millilitres of oxygen per kilogramme per minute are required to swim at a set pace, i.e. swim efficiency.

Lauren shows she is a far superior swimmer by only requiring just over half the amount of oxygen I do to swim at 1:42 per 100m. To look at these figures another way, Lauren is still exerting herself less when swimming 14 seconds per 100m faster. As a two-time Paralympic swimmer this is to be expected, yet it is still impressive. While she probably has a strong edge in overall fitness, it is her technical proficiency, allowing her to sit higher in the water and cut a more streamlined shape that is paying the real dividends. 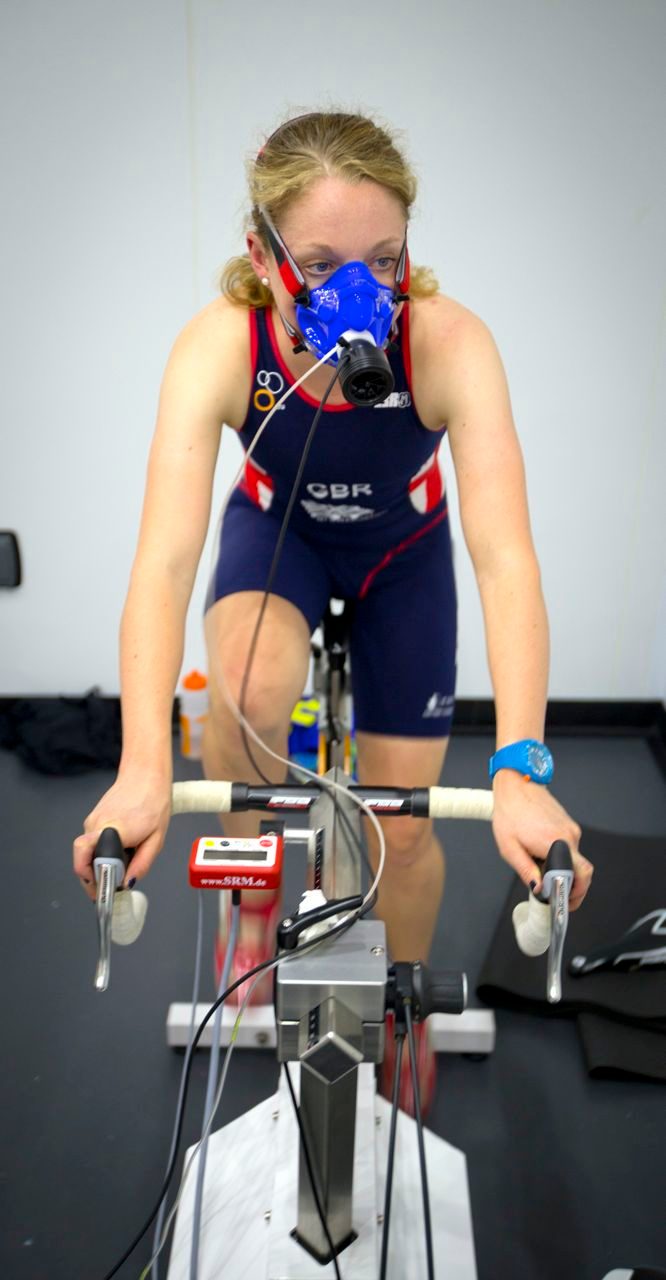 The column to note here is the RPE (or rate of perceived exertion, Borg scale 6-20). When attempting to push five watts per kg for four minutes, it was a maximal test for me, yet Non saw it as a ‘relatively hard effort’ and could have continued (it is not dissimilar to the effort she would sustain throughout a triathlon’s 40km bike leg).

Non’s V02 Max (the maximum millilitres of oxygen per kilogramme per minute her body can use) will be higher than mine [Tim previously tested at 65.0 ml/kg/min], however it is her greater efficiency of working under sustained duress that is most marked. The message is, no matter how fit you are, to be a world champ you need to be able to suffer.

For more information about the GSK HPL please visit: www.gskhpl.com