The UK General Election may have provided no clear winner in the summer but you triathletes are a more decisive bunch than the general British populace, right? Well, now’s the time to prove this as we’re asking our readers to take to the ballot boxes to vote for the champions, courses and commodities that made 2010 the year it was in the 220 Triathlon Awards 2011.
Will Cat Morrison’s Ironman Lanzarote heroics edge out Chrissie Wellington’s feats at Challenge Roth? Can Johnny beat Ali in the battle of the Brownlees? Did Bala better Blenheim? Ceepo conquer Cervélo?
You’ll provide the answers to these posing puzzlers by taking a trip to the link below and casting your vote. Once through to the voting page, you’ll be presented with the 21 categories you can vote for, where it’s simply a case of typing in your choice. The eagle-eyed amongst you will have noticed the awards have expanded with the inclusion of two new categories for 2011: Paratriathlete of the Year and International Triathlete of the Year.
As in previous years, you can only cast a vote once. Please also note that in the Coach of the Year category, it must be the actual coach and not the coaching company that you vote for. Additionally, please state the exact model and event you want to vote for in the gear and race categories (for example, Newton Gravity and not just Newton; London Triathlon not London).
In a change to the last few years, voting will include only one stage, which opens on 16 November and closes on 7 January. The winners will be announced at the 220 Triathlon Awards ceremony, to be held at Sandown Park, Surrey, on Saturday 12 February 2011, during the weekend of the TCR Show at the same venue.
Get voting by clicking here before 5pm Friday 7 January. 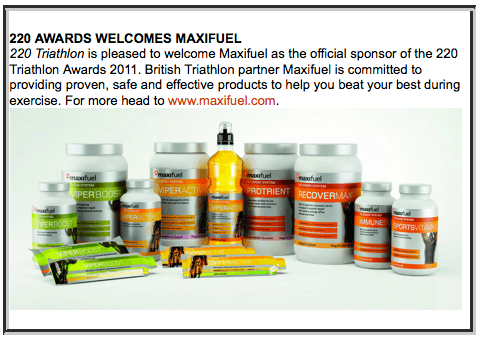 Return of the Raw