With an early rainstorm clearing to leave calm, mild conditions it would have been tempting to think the 250 triathletes on the start list for the 2018 Isklar Norseman Xtreme Triathlon were in for a (relatively) kind day in the mountains – well, as kind as it can get at a race we ranked as 7th toughest Iron in the world. Norseman is a long day up some very big mountains though – so it’s never a good idea to try and second-guess what you might be about to experience…

220 Triathlon were in Norway this year to follow the race, with Editor Helen Webster helping present the live coverage (if you missed it, watch the full 13 hour broadcast by following the link here) and in the days leading up to the event, most of the talk was about one thing – the unusually warm water conditions. Usually maxing out at a cold 14 degrees C on race day, a hot early summer added to a lack of melting snow around race time had meant the fjord was a balmy(ish) 16-17 degrees by race day.

Boarding a car ferry at 4am in the pitch black is still a daunting experience though and as the athletes sat waiting for the ferry to reach the starting point 3.8km from Eidfjord, there was a quiet contemplation amongst the competitors who sat quietly stretching, meditating, or making last-minute adjustments to their wetsuits. Many were wearing thermal suits and full neoprene balaclavas and socks to help their bodies cope with up to two hours in the still less-than-warm black waters.

Taking that ferry jump this year were British athletes including 3x Kona finisher and 2018 Celtman champ Harry Wiltshire, 2017 Celtman winner Chris Sterling and Swissman 2018 winner Flora Colledge. They faced some of the toughest competition though, as in the men’s race two of the best Norseman athletes in the world were lining up: current record holder Lars Christian Vold and 2x previous winner Allan Hovda, both Norwegians familiar with the tough and technical course. In the women’s race, Norwegian pro triathlete Mette Pettersen Moe was sure to be competitive, alongside Finnish racer Heini Hartikainen and American pro and winner of Alaskaman Morgan Chaffin.

After a hosing down on the ferry to acclimatise to the water temperatures and avoid cold water shock, the athletes jumped into the pitch black water to swim to the race start line, marked by kayaks. Their goal? To follow the 3.8km course around the shore and spot a bonfire burning on the shore back in Eidfjord (a very Viking-esque course marker!) that would guide them to the solitary course buoy where they would turn left and come in to T2.

First out of the water was Norwegian Eirik Ravnan in 00:48:08. A former competitive swimmer with 13 gold medals under his belt he didn’t have a clear break though, as GB Pro Harry Wiltshire, also an extremely strong swimmer and winner of this year’s Celtman race was just seconds after him. Ravnan strengthened his advantage with a super-fast transition though and went on to open up a small gap from Wiltshire as they rode through the tunnels and on to the Old Road, up into misty rainy conditions on the wide Hardanger Plateau. In the women’s race Mette Petterson Moe exited first in 00:53:53, less than 5 minutes after the leaders. 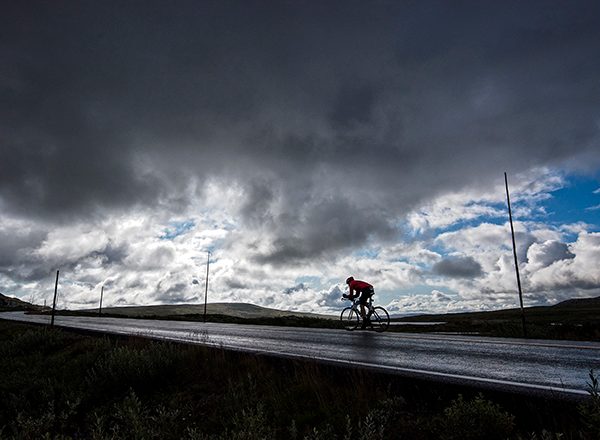 The Norseman bike route is infamously tough though and as Wiltshire told us in a pre-race interview: “This isn’t a race won or lost in the swim. It’s all about who’s still got enough left in the tank at Zombie Hill”. There were plenty of hills to take in before the final run up Zombie Hill though (more on that later) as five mountains culminating in the toughest of them all – Immingfell – needed to be navigated first in conditions that were getting increasingly foggy and slippery.

Ravnan kept the lead for the first part of the course, but the expertise of previous champions Vold and Hovda soon came through as they broke through to the front of the course and started to show what makes them so utterly unbeatable on a bike course that can quickly chew you up and spit you out if you don’t pace it accurately. They describe this race as the one where you can ‘find yourself all alone on a small bike on top of a big mountain plateau’ and watching the athletes string out alongs the course in the mountain fog, it quickly became apparent why. The landscapes are just huge in this race, although the views probably weren’t enough to distract those at the front of the race chasing the win.

Anything is possible at Norseman though and the sun broke though on the bike course, leaving athletes who had prepared for typically windy, cold and wet Norseman conditions baking in the sweltering heat. With Vold in the lead, the two athletes arrived at the 500m climb to Immingfell looking focussed. In an interview before the race as part of a panel interview led by 220 [follow link here], Allan Hovda revealed that himself and Lars Christian Vold had trained together on the course a couple of weeks previously and he’d identified that Vold had the edge on the technical descent at Immingfell, so he’d spent some extra time training on those roads. It really showed during the race too, as both athletes swept down the descent tucked down on their tri-bikes’ crossbars, aiming to get as aero as possible as they navigated the technical hairpins and treacherous descent.

Vold entered T2 first, but with Hovda hot on his heels it was clear we were in for a tense finish in the mountains. The Norseman run route is famous for its brutality. The first 25km are flat and follow a tarmac road, then after that you start to gradually climb with the infamous Gaustatoppen mountain peak – ‘Zombie Hill’ – rising up into the distance ahead of you like some great monster, as if to taunt you with the distance you have left to climb.

THIS is where @nxtri finishes