Your tri-suit will be with you for the whole race, so when buying one consider your needs. Do you want it to help you swim faster? Do you need a lot of padding for the bike? Are you worried about how quickly it wicks sweat and dries? Also, will you need pockets for gels? As for female-specific features, look for a good integral bra with enough support for the run. Also, keep an eye  out for anything that may rub or chafe – a small irritant can become a big problem after a couple of hours (or more!) of racing.

Tri-suits: what to look for 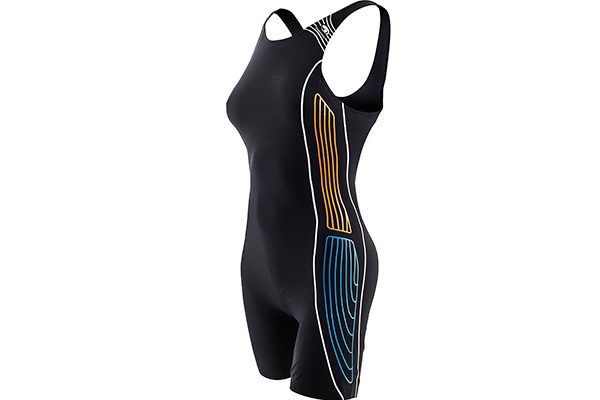 Designed ‘for ITU athletes whose primary focus is to go faster in a non-wetsuit race’, it comes as no surprise that this is a suit where speed is the focus. So what does that mean? Well, a pared back design (no pockets here!) for starters. Of all the suits on test this is the one designed most like a swimsuit, with an open back, shelf bra and shorter legs.

The construction (as you’d expect) is pretty amazing too – teflon-coated microfibre fabric helps you glide through the water and dries super quickly on the bike, while the seams are welded to reduce drag. The chammy is comfy enough on shorter bike sections, yet feels barely-there on the swim and run. There aren’t any zips and the suit is slightly compressive, so it feels amazing once it’s on, but if you have curves, wriggling into it takes a while. Plus, even our modest A-cup tester found the skimpy design revealed a touch of what the Daily Mail would no doubt refer to as ‘side boob’…

Verdict: Amazing – but price and skimpiness will limit appeal 88% 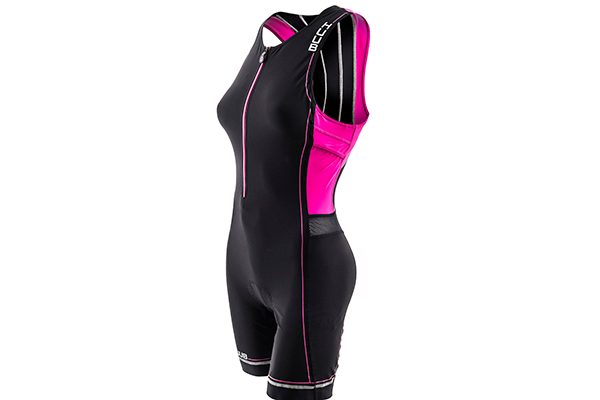 This suit took top honours in last year’s women’s tri-suit test, so it’s no surprise that we were equally impressed this year. Although not entry-level (and Huub do another suit beneath this one), the price isn’t unreasonable for a well-made, aesthetically-pleasing and high-performing suit that should last you a number of seasons. So what do you get? Impressing us first is the stretchy integral crop-top style bra (unique in this test) that gives great support while being very light and also avoiding the annoying double-zip design.

There are also wide mesh panels on the back and along the hips (tip: use sunscreen under these if going long to avoid sunburn on the bike) to keep things cool, Coldblack fabric that dries quickly and two clever pockets on the sides of the suit that keep gels accessible yet tucked away enough not to annoy. We’d like some rubber grippers on the legs to make them extra
secure, but they stayed in place okay without.

Verdict: A suit that continues to impress with great features 92% 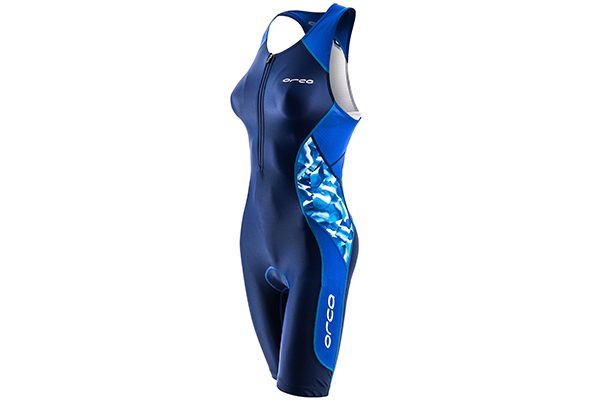 Initial reactions to the new entry-level suit from Orca were good – we liked the striking graphics (three colourways available) and the Aquastretch fabric with breathable Vapour side panels felt good quality, especially for the price. A duo of rubber bands around each leg do a good job of keeping the legs in place, while mesh panels help with cooling. Angled storage pockets with a flap are well-positioned and the chammy was ample for keeping our rear comfortable – although it did feel a little soggy on the run. Sadly though, where this suit falls down is in one annoying oversight.

There are zips on both the bra and the suit front, yet neither has a protective flap or zip garage, leading to chafing from both the zip and the plastic stitching. For a nicely-designed suit, this is just a real shame. Also it’s a personal thing, but we weren’t a fan of the slightly frumpy longer leg length, that came almost down to the knees on our 5ft 7in tester.

Verdict:  Some nice qualities let down by a scratchy zip 75% 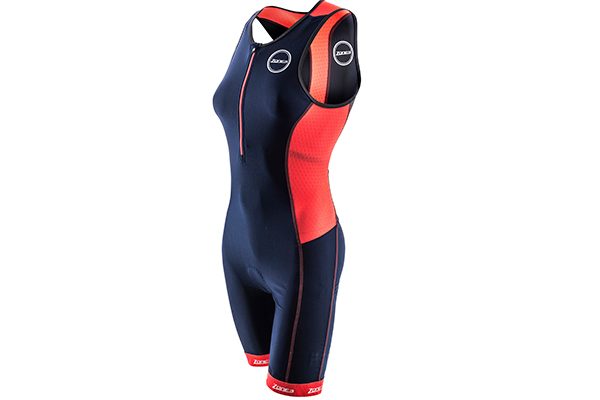 We included the new Aquaflo+ in our men’s tri-suit group test, but as the fit and features differ between male and female suits, we felt it worth including again here. First up, Zone3 get a thumbs up for adding both a protective fabric flap and a zip garage to the double zip on their suit front and integral bra. It may seem a small thing, but it makes a big difference. We were also impressed by the fabric, which had plenty of stretch. Round rubber dots on the bottom of each leg kept them firmly in place and side pockets were easily big enough for most gels.

Like in the men’s test though, where this suit could do better is in the size and rigidity of the chammy. Although comfy on the bike, it was bothersome on both the swim and run, feeling like it was brushing against our legs on each stride. Finally a point on fit – although a medium was perfect for our UK10 tester, the integral bra felt too big, meaning we’d have liked more support.

Verdict: A nice suit, but the chammy felt too prominent 77% 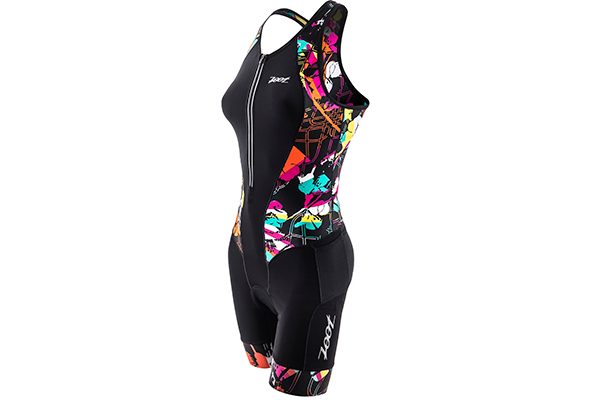 Pulling this suit from tri gurus Zoot on, we’re initially struck by how good it feels. The fit is close without being constrictive and the wide bands at the bottom of the legs feature hundreds of little rubber pads that make them stay in place without even a hint of sausage-leg.

There’s also an integral zip-up bra (with a flap behind it to avoid chafing) and the Coldblack technology fabric did an excellent job of keeping us cool and wicking away sweat. The chammy is designed with the aero position in mind and is comfortable without being noticeable away from the bike leg – and four (yes four) hip pockets give room for multiple gels. In an ideal world we’d like some mesh panels to aid airflow, but that said this suit didn’t feel sweaty. The design is striking(!), but on the plus side avoids the sickly pastels often marketed at female triathletes. However the ‘Zoot’ graphics on the legs cracked after only a couple of wears/washes, which was a real shame.

Verdict: A quality suit with plenty of nice features 90% 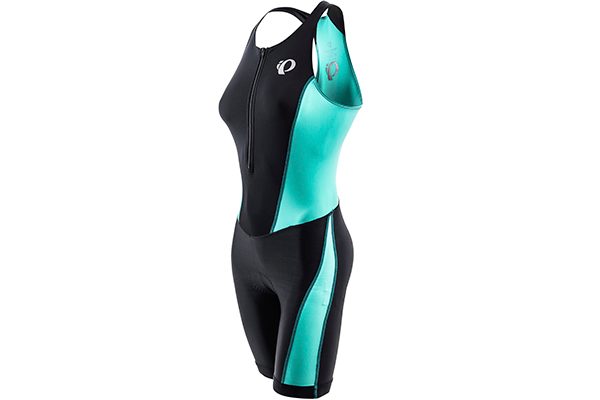 Top marks to Pearl Izumi for being the only tri-suit on test to come with a separate crop top-style bra. Made from lightweight and breathable fabric, it’s nice to have the option to use it or add your own bra (many larger-busted triathletes will need more support than most tri-suit bras offer), plus it makes getting into the suit a doddle.

This is also the least expensive suit on test, which is surprising given the good quality, breathable fabric and quick-drying chammy. Silicone leg grippers kept the legs in place, while panels on each side help to keep things cool. There’s also a red/black colourway available if minty-green isn’t for you. In fact we only have one real criticism with this suit and that’s the single pocket, which is positioned in the lower back. The size meant things tended to move around a bit, and on the run it got quite distracting. That’s a minor quibble though, on a suit that has a lot to offer at an entry-level price.

Verdict: All credit to Pearl Izumi for a great-value suit 85%