You need to protect your eyes in triathlon. You do it anyway in the swim with goggles, but you spend a lot longer running and riding than you do swimming. So if you want to avoid straining your eyes or developing a headache due to prolonged squinting, you need to protect them against harmful

UV rays with some shades. But it’s not just the light you need to worry about.

Your eyes and eyesight are also at risk from all the dust and dirt floating about in the air, not to mention any of the debris that’s flung up by your front wheel. And not having streaming eyes on fast descents is a big plus.

When running, glasses can be a real benefit too. You still need protection from the sun and, although speeds are less, a low branch or a bug in the eye can still be painful and slow you down on race day. So it’s hard to argue against eyewear. What’s harder is choosing a pair that suits you – suits your face, your needs, your sense of style and your budget. Fit is everything with glasses and, like saddles, what works for your club mates might not work for you. Make sure they fit snugly to your eye socket, sit comfortably on your nose and ears, and lightly grip the side of your head.

There should be no bouncing or slipping when you jump up and down and, when you lean forward in an aero tuck on your bike, no obscuring of your vision. Finally, interchangeable lenses are necessary for changing weather conditions and riding at night.

Here we point you in the right direction in terms of comfort, the amount of steaming, vision, grip, the interchangeability of the lenses, weight and, last but far from least, their effectiveness in dealing with sunlight in various weather conditions. 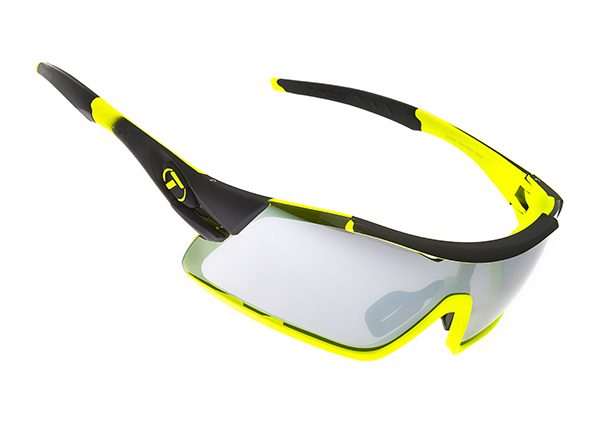 The Davos from Tifosi glasses appear to represent great value. They’re the cheapest model of the six here and come with a hard storage case, a soft cleaning bag and three interchangeable lenses – one clear lens, one light-enhancing lens and one slightly mirrored smoke lens. Switching between them requires a bit of brute force to begin with but gets easier as you perfect the knack and the frame develops some give.

Yet the frame is more of an issue when you’re wearing them, as it’s visible whichever way you look. It’s not obstructive but, certainly in this colour, it’s hard to ignore. The bigger problem is the frame’s insecurity – the glasses constantly slide forwards and, with even the slightest tilt of your head, you can see over the brow. The vented lenses are also breezy, which may help prevent sweat getting in your eyes, but also makes your eyes more
prone to watering. So not such great value, after all.

Verdict: some handy extras and a relatively cheap price, but lacking a secure fit 66% 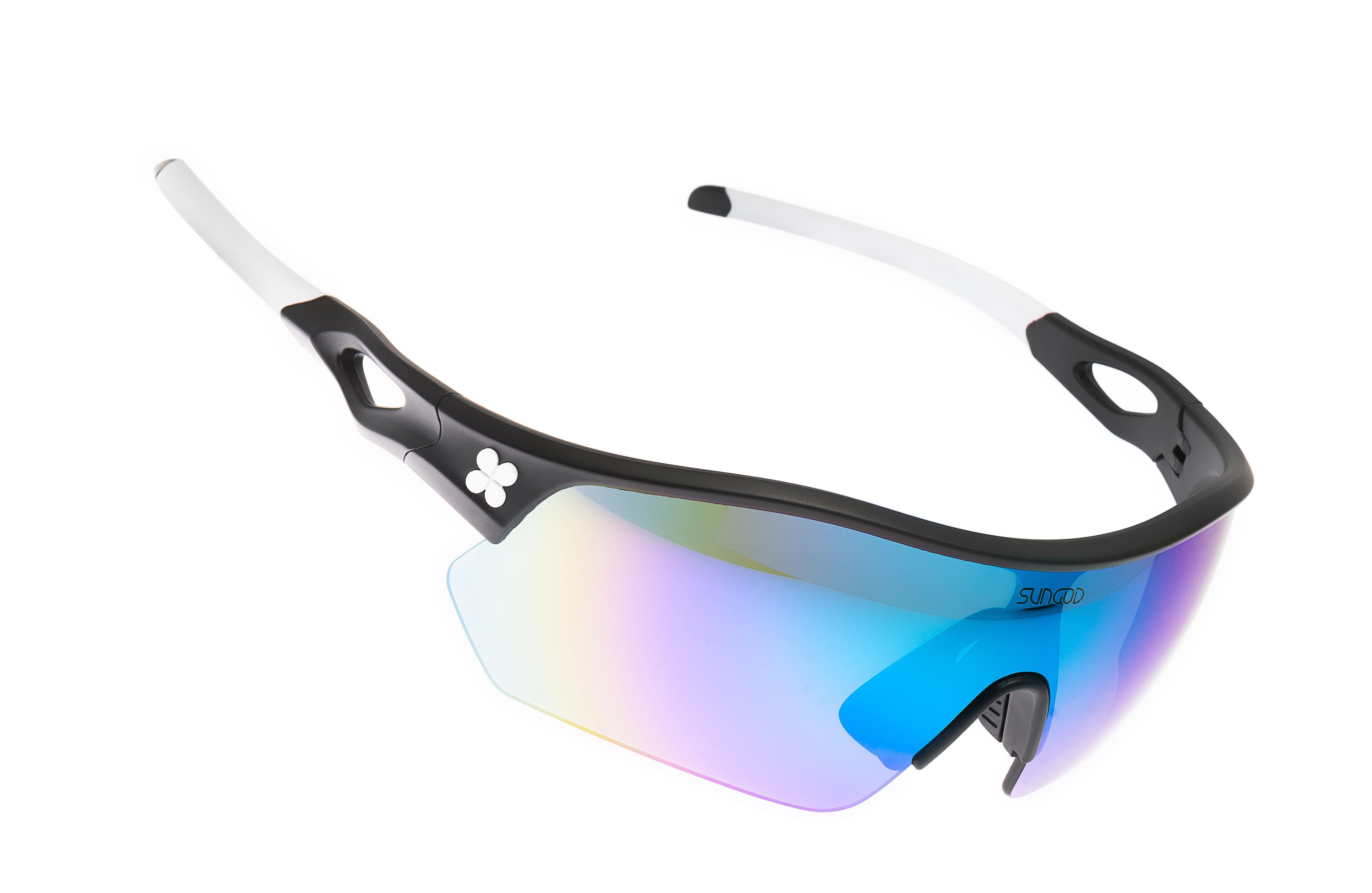 In theory, the Pacebreakers from British brand SunGod have everything you need for a pair of triathlon glasses. They offer a clear, unobstructed field of vision, provide total protection from ultraviolet rays, reduce glare to prevent eyestrain and have an elevated brow to let you see ahead when your head’s dropped in a tuck. There’s also a wealth of frame colours and lens options to pick from.

But in practice, they just don’t sit still. You may start your ride or run with them nicely positioned but, before long, you find yourself repeatedly reaching up to slide them back into place. The nosepiece and the arms need to keep a greater grip on your head. And the coverage isn’t good, with enough space behind the glasses to slide a finger in between the lens and your face. You can’t quite peer out from underneath them but you can almost see the entire front wheel, meaning there’s a clear path to your eyes for any debris that might fling up from the road. sungod.co 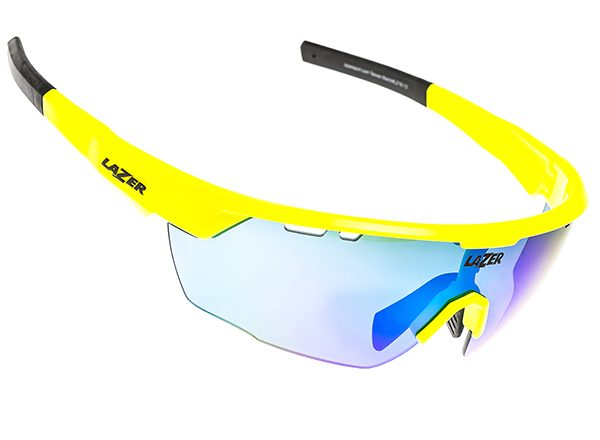 It’s probably fair to say Lazer’s Eddy glasses are better suited to road racing than the unique demands of triathlon. It’s the top of the Eddy glasses that’s the biggest problem for triathletes (and time triallists for that matter). Lean down low into your aerobars and that thick brow is brought almost directly into your line of sight. You can see perfectly well while you’re sitting up riding on the hoods but drop yourself into a low-profile position and you find yourself tipping your head up to gaze out from under it.

The brow’s not an issue while you’re running but what then becomes a problem is the bottom of the lens. It’s just too high and too far from your face – you can easily slide your thumbs up behind it, so light, dust, mud and the breeze finds its way behind the lens all too easily. With interchangeable lenses and nose pieces, it’s not a bad eyewear package or price, but it needs some refining for the demands of triathletes. lazersport.co.uk

Verdict: the brow’s too big and too low, and the lens is too shallow for tri bike and run use 71% 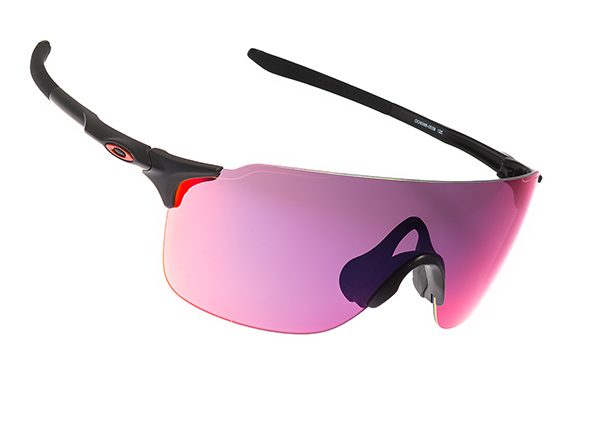 Oakley make a big deal of standing out from the competition in performance and styling. Their glasses are said to offer a closer fit, greater coverage, better protection and distinctive looks to justify the usually above-average prices. And, even if they don’t always deliver on the performance front, their unmistakeable designs are often enough to make them desirable, if not affordable.

The EV Zero Stride glasses deliver on the performance front. They sit closely and securely on your head without jumping around or sliding forwards no matter how vigorously you’re running. The broad polarised lens gives everything a slight rose tint but is crystal clear and undistorted across its entire sweep. The coverage is excellent and the elevated and frameless brow means your view is shaded, protected and unobstructed even when you’re low on the aerobars. The only feature they fall down on is the bland styling. uk.oakley.com

Verdict: performance is great but the price and dull styling reduce their desirability 83% 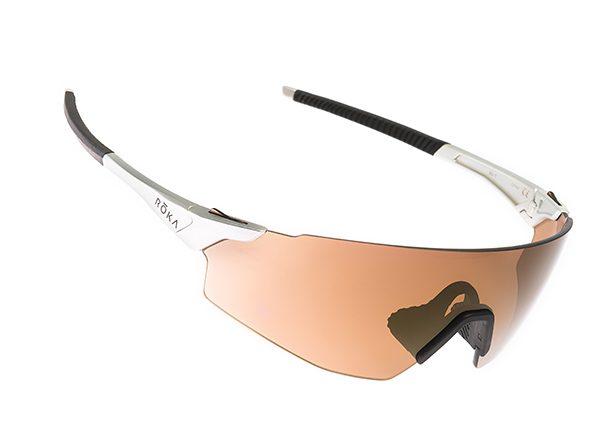 The SL-1 glasses from Texan brand Roka are great, for the most part. In this guise – matte silver frame and octane mirror lens – they’re ideal for the changeable light of the British spring and early summer. The lens provides clear, high-contrast views on overcast and cloudy days, and just enough shade to stop you squinting on bright and sunny days.

There’s nothing to obstruct your view either as the frame is nothing more than the arms, so as far as your field of vision is concerned it’s non-existent. Coverage is impressive too, with the lens sitting so close to your face that your eyelashes brush against the back of it, which is reassuring if a little disconcerting when you’re running. Nevertheless, it’s difficult to recommend them for triathlon as the brow is a tiny bit too low, which becomes noticeable when you’re tucked over the aerobars. You’d be better off going for the taller SL-1x model from Roka instead. 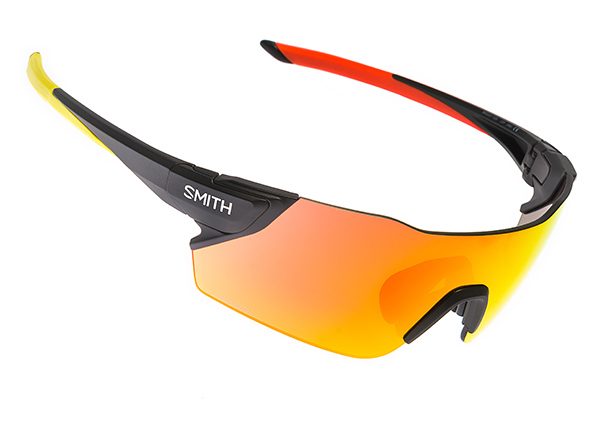 On the face of it, the Smith Attack glasses are expensive. And they really are pricey; 50 quid more expensive than any other glasses here. But they’re also the best in terms of performance, fit, coverage, style and what you get for your money. £200 is a lot of cash but it buys you an eyewear package containing two lenses, two-position adjustable nose pads, a soft cleaning bag and a hard storage case.

Yes, Tifosi’s Davos provide you with all that for almost a quarter of the price but the Smith Attack glasses not only stay put, their ‘frameless’ design doesn’t intrude on your view. Plus switching between the two lenses is a doddle as the arms rely on magnets to snap into place, rather than the frame’s flex (or your brute force). The Attack lens provides close and complete coverage and has just enough height at the sides to work while you’re in an aerodynamic tuck, too. We’ve found our racing glasses for 2018! smithoptics.com

Verdict: expensive but it’s very difficult to argue that they’re not worth it 93%