Dropping down towards the Lanzarote coastline from the volcanic mountains forming the backbone of the island, Club La Santa appears in the haze like a town in its own right. Featuring a huge central accommodation block, numerous sports halls and courts, a bike centre, three 50m competition pools and a lagoon used for swimming and watersports, plus various restaurants and a leisure pool, it’s as if someone created a giant playground for triathletes. 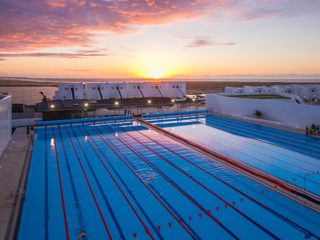 We’re here to do our annual wetsuit group test for the magazine and with a suitcase full of new wetsuits to be put through their paces, it’s that lagoon that we’re here for. When testing wetsuits it’s important to have access to open water that is similar to race conditions (with salt water a must due to the extra buoyancy it offers) and which has some waves, yet without being so rough that you’re focussing on the conditions and not how good the wetsuit is.

You also need controlled conditions, which is why Club La Santa’s lagoon is perfect. Not only does it form the buoy-marked 1.9km loop for the Lanzarote Half-Ironman course, but being relatively sheltered and separated from the sea by a rock sea wall, we get very similar conditions for each of our tests, which helps give a fair comparison of speed and performance.

As we’re going to be spending most of our time in the water we opt for a Comfort apartment which is great for our needs. It’s spotlessly-clean and newly equipped, with a central kitchen/living area, bedroom, bathroom and private balcony overlooking the local surf town Famara. If you want to spend a little more, different options are available including multi-room apartments for bigger groups and luxury apartments in the newly-built section overlooking the lagoon.

Everything at La Santa is a 5-10 minute walk away and this makes training easy. We can test a wetsuit in the lagoon, then do a few lengths in the pool as well to double-check any features we need to outside of open-water, before taking a quick shower and making some lunch in the apartment before doing it all again in the afternoon. We don’t tend to back-to-back test one wetsuit after another as they can be tricky to get into when you’re wet and covered in sand ­– plus we like to come to each one fresh so results aren’t influenced by being fatigued!

Despite being on wetsuit-testing duty we can’t resist trying out a few of La Santa’s extensive classes as well (seriously, that timetable has everything on it!) and during our stay drop in to outdoor yoga (good for stretching tired arms!), TRX, a HIIT session, swim squad in the pool (because we haven’t done quite enough swimming!) and a chilled SUP session. It’s nice to see the lagoon from another perspective! 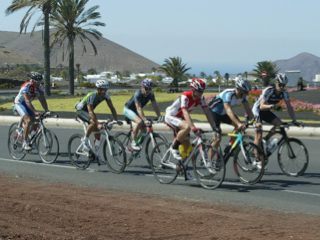 Club La Santa has a dedicated bike centre with 600 bikes for hire, plus on-site mechanics.

All too soon we’re trying to cram many, many, still slightly-soggy wetsuits back into our suitcase and heading home, with a return visit very much in our plans! Club La Santa really is a holiday haven for triathletes and we were surprised by just how much there is to do at the resort – with plenty of options for family, too, if the rest of your clan aren’t as keen on swim-bike-run as you are!

Find the 2018 wetsuit group tests in issues 352 and 353 of 220 Triathlon. Helen Webster travelled as a guest of Club La Santa, one of the world’s leading sports and active leisure resorts, offering 40 free sports and activities including three 50 metre swimming pools, an 800 metre running track and a bike centre with a choice of 600 bikes for hire. For more information and booking visit www.clublasanta.co.uk or call 0161 790 9890.  Prices start from £644 for a ‘comfort’ one bedroom apartment for 7 nights, which sleeps up to 3 adults and a child under 15 years.