Which goggles will cut through glare, brighten up murky waters and help you to a race-day PB? Helen Webster puts six to the test…

Forming part of their ‘extreme fitness’ range, Vorgee sell the Vortech goggle in a choice of clear or smoked lenses. We had the clear version on test here which would be fine for overcast days and if you’re looking for a budget-priced goggle to use both in the pool and outside, but we’d be happier with a tint on the lenses if there’s any chance of the sun’s rays making an appearance.

Once on, these goggles fit well with soft, leak-proof rubber seals. They have a similar deep profile and curved lenses to the Marus meaning there was no risk of the lenses touching our eyes – although the lenses were much smaller, which meant that when looking to the side the black seals were more visible.

Generally these felt excellent quality, although we had a slight concern over how long the thin straps would last. Also, the lack of clips meant the excess strap was left flapping, which was a bit irritating.

Verdict: Well worth a punt if you’re not a fan of tinted lenses, 80%

The classic Hydra-Vision from BlueSeventy has had an upgrade with new polarised lenses – adding an additional £5 to the RRP and bringing these in as the second most expensive goggle on test. The lenses are wide and gently curved which works well for visibility and their close, shallow fit will aid aerodynamics.

For us though, we found that they were just too close to the face meaning that when tightened to get a good seal, our eyelashes were crushed against the lenses. Also, compared to some of the other goggles on test we felt the finish on these was less good quality.

It’s a minor annoyance, but the logo on the nosebridge started to wear off after only a couple of uses. Outside, the polarised lenses worked well at cutting out the sun’s glare, although in cloud they made murky lake water look even murkier. We liked the internal adjuster buttons though, and the wide straps kept them secure.

Verdict: New lenses for a classic, but there are better out there, 78%

Coming in as the least expensive on test, these will no doubt appeal if you have a habit of losing/scratching/sitting on your swim goggles… To merely pigeonhole them as a budget option would be doing a disservice to what is in fact a very good open-water goggle though.

The curved polycarbonate lenses on the 226 gave good peripheral vision and the clear frames meant there were no annoying black edges distracting us. We did find it took a little bit of adjusting to stop water seeping in at the edges of the wide frames, but once we’d spent a bit of time fiddling with them they were fine.

The blue tinted lenses gave great visibility under the water, cutting glare without making things any murkier – although you may want more protection if planning a race in very sunny climes. Our only real criticism would be the adjuster clips, which were tricky with cold paws.

One of only two female-specific models on test, the Futura Biofuse is marketed as a goggle suitable for outdoor, open water or fitness swimming and comes with grey polarised lenses and Speedo’s Anti-fog Ultra technology. We struggled a bit with the fit on these as although touted as being designed for women, we couldn’t get them to fit without one (or both) lenses leaking.

Also, despite Speedo claiming ‘wide vision lenses’ these were in practise the smallest lenses on test with only a very gentle curve, meaning they felt more like traditional pool goggles than those designed for open water.

On the plus side, the seals were soft and comfortable and similar internal adjuster buttons to the BlueSeventy goggles were a nice touch. That grey tint wasn’t our favourite though, as in overcast conditions it did nothing for visibility in our test lake – so choose these for bright, sunny weather only. 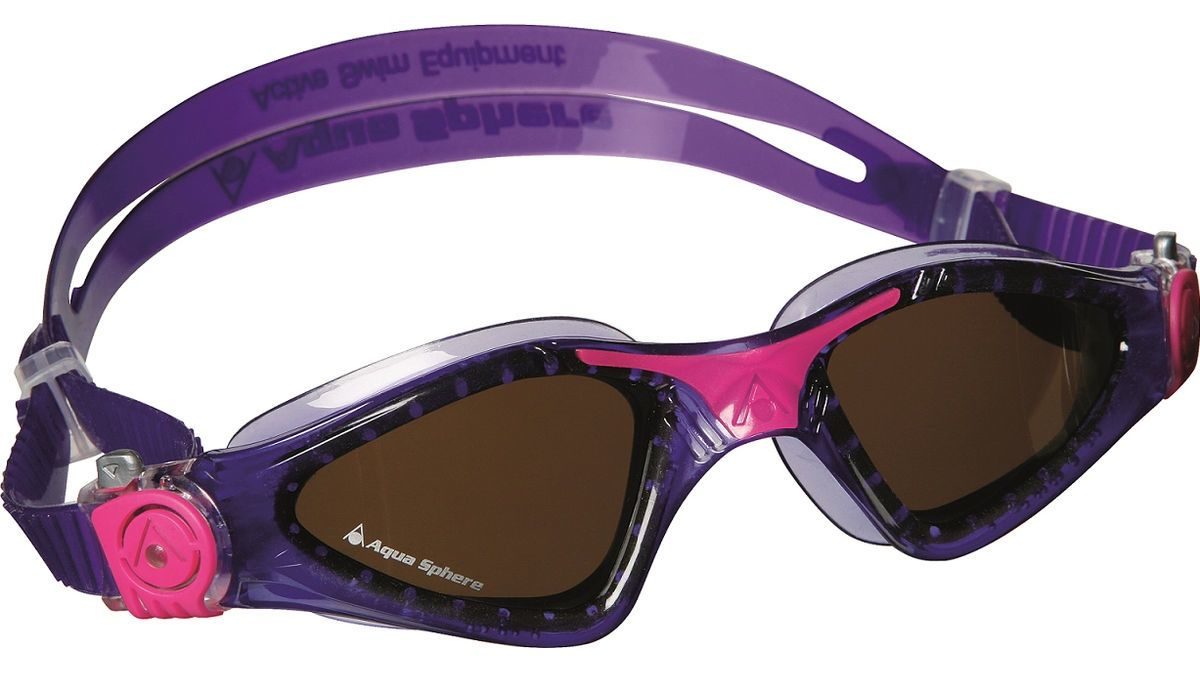 We spent many a happy hour swimming in Aqua Sphere’s effectively-shaped Kayennes during last year’s race season, so were expecting similar good things from this new smaller fit women-specific model. Sadly though, this new design just didn’t work for us.

The lenses sat quite close to the eye, meaning our eyelashes touched and because of the unusual shape didn’t seem to sit well either within or outside of our eye socket. It’s a shame, because the new polarised lenses were impressive – cutting out glare and giving things a warm tone that was easy on the eyes.

Wide silicone straps felt secure, while adjustability is via a small button on each side that were easy to operate, even with cold hands. Finally though, there’s that Barbie-esque colour scheme which no doubt will appeal to some – but for us, it just made us feel a bit like we were wearing kids’ goggles.

Verdict: We’d bypass these and opt for the unisex version, 67%

Thanks to their mirrored lenses, these goggles already win the ‘best goggle for psyching out the competition in a race’ award and with their orange lenses and wasp-coloured frames look pretty sharp too. Aside from that though, this pair impressed from the moment we pulled them on.

The deeper lenses mean visibility is excellent and this is helped by the curved shape – meaning in a choppy lake they gave unrivalled visibility. The lenses are quite rigid in construction, but the flex in the nosepiece meant we had no trouble with the fit, while the seals were soft and comfortable and gave us no issues with leaking.

The polarised lenses performed well on a day with changeable weather and when cloudy, didn’t make things too dark. The chunky straps reassured us that they would stay in place and adjustability was easy via two small levers. All in all, a superb goggle for an unbelievable price.

Verdict: Unrivalled performance at half the price of others, 93%

For lots more buying advice head to our Gear section