With colder temperatures around the corner, now’s a savvy time to buy some running shoes that can chomp through the miles to see you through your off-season training runs. Some brands recommend their racing flats are replaced after as little as 300 miles, while most shoes with a more robust build and cushioning can last nearly double that as a conservative estimate.

Some runners are best off using the same shoe for training and racing, as the benefits of a lighter shoe are little use if they’re going to injure you on race day because you haven’t used them enough.As 220 coach Spencer Smith says: “Training shoes are usually very light nowadays anyway, and you could cause yourself a lot of hassle by switching to racing flats for races when you’re not used to them. Although every runner is different it’s often best to stick with what you know. If you do want to use a lighter shoe for race day, make sure you’re at least doing some tempo or track sessions in them to get used to the different sensations.”

Hence the name of the test, most of these shoes are made for high mileage and therefore offer plenty of cushioning and stability tech features throughout the 10 test pairs (all weights given are for a UK size 10.5). Different shoes are right for the needs of different runners, so our scores also factor in build quality, value and mass appeal. As always, we’d suggest trying before you buy and getting a gait analysis at a running shop.

Overpronation – to a significant degree;

Underpronation – no inward roll and even a slight outward roll.

Neutral – Type of shoe, with adequate support and cushioning.

Pronation: what it means and how it affects your run shoe choice

Run shoes: 9 of the best reviewed for training and long distance races

Triathlon run shoes: 10 of the best for racing the run leg 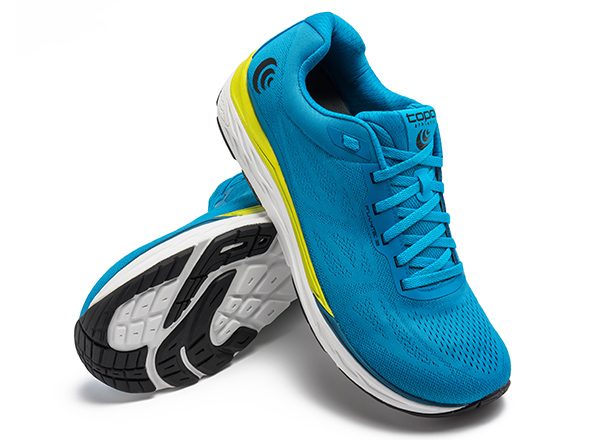 As the name suggests, at 274g Topo’s Fli-Lyte 3 is the lightest shoe on test, having shed some weight and most of the overlays on the upper compared to the second iteration. Coupled with a 3mm drop, this places it between the racing and training shoe categories, and we found it worked as an everyday shoe. We still find the roomy toebox a little too wide, but those with wide feet will appreciate the extra room. The low drop makes it most suitable for neutral runners, and the moderate cushioning absorbs shock without being excessive. They aren’t grippy on brief trail forays, so are best on the road only.

Verdict: a training and racing hybrid for those with wide feet 79% 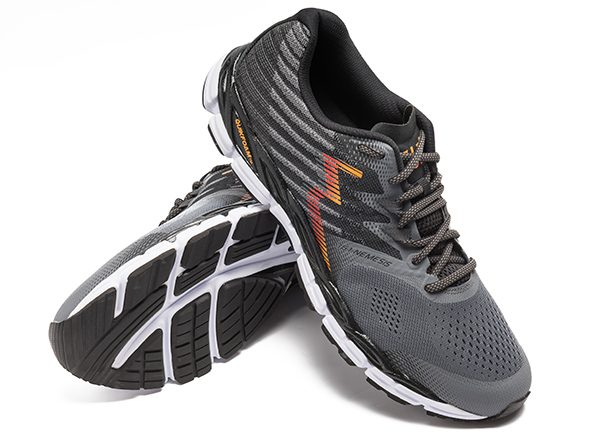 One of our heavier test pairs at 349g, the 361-Nemesis with a 9mm drop is robust and built to last. Like most stability shoes, you get full cushioning along the whole midsole. It’s not as soft as some of the other pairs and lacks responsiveness, but is pleasant enough on easy runs. The upper has breathable mesh at the front but is heavily stitched, making them durable but bulky. The tongue is comfy against the midfoot, but they’re narrow at the toebox. While we’d opt for something lighter for quality training sets, there’s appeal here for those requiring high levels of stability. 361europe.com

Verdict: Heavy, but robust and comfy for steady runs 77% 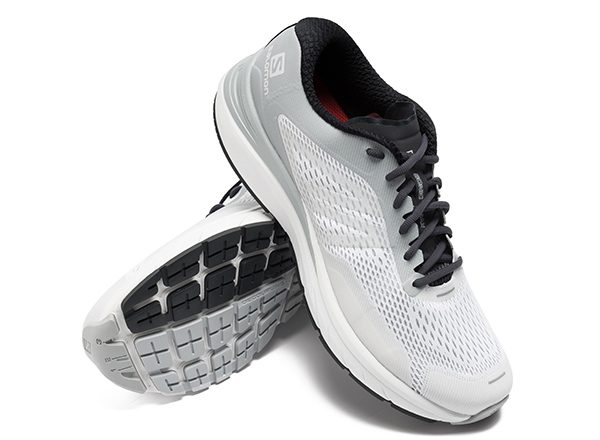 The Sonic RA 2 weighed in at 301g, and is recommended as a daily trainer with a comfy, form-fitting upper and moderate cushioning. With Salomon being best known for their off-road shoes, the grip didn’t disappoint, standing up to harsh weather and brief trail forays. The stack is quite high with the sole unit being almost the same height as the upper and we found it narrow in the middle, which made for an unstable feel underfoot. We thought the midsole cushioning was a bit harsh compared to some other shoes on test. They also have bizarrely long laces that need swapping out.

Verdict: Breathable upper let down by a harsh running feel 70% 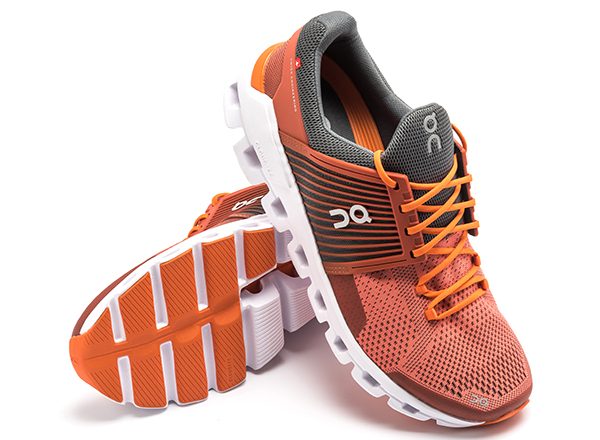 On’s trademark ‘Clouds’ have become hugely popular, and their latest cushioned offering should see that popularity continue. They’re designed with urban runners in mind, so you get a reinforced yet stretchy upper that moves with your foot, making them comfy with or without socks. A criticism would be the risk of stones getting stuck between the sizeable lugs, although they dislodge themselves after a few strides. Overall the Cloudswifts have the comfiest upper on test, and the extra cushion compared to other On shoes makes them a great option for Ironman racing as well as urban running. on-running.com

Verdict: An ideal blend of flexibility and comfort 92% 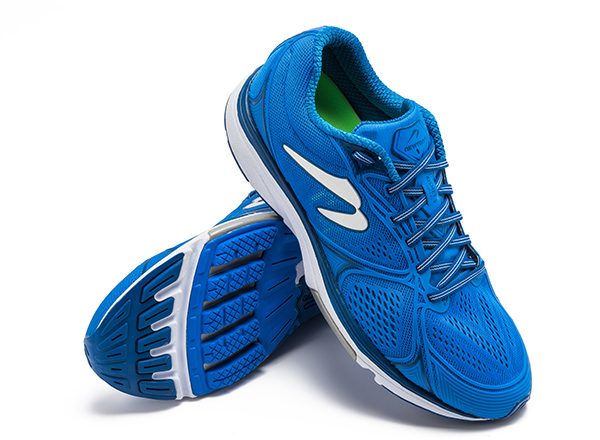 Newton tout the Kismet 5 as a lightweight stability shoe, with cushioning from the midfoot through to the heel and a 4.5mm drop to keep your foot in a neutral position. At 324g it’s not super light, but Newton have updated the upper to make it more breathable and supportive. The patented P.O.P.2 lugs are five raised strips of rubber located towards the front of the outsole, which provide a springy sensation during toe-off. Newton say it’s more responsive than foam-core run shoes, and we kept a high cadence during fast efforts in these compared to other stability running shoes. newtonrunning.com

Hoka One One Clifton 6 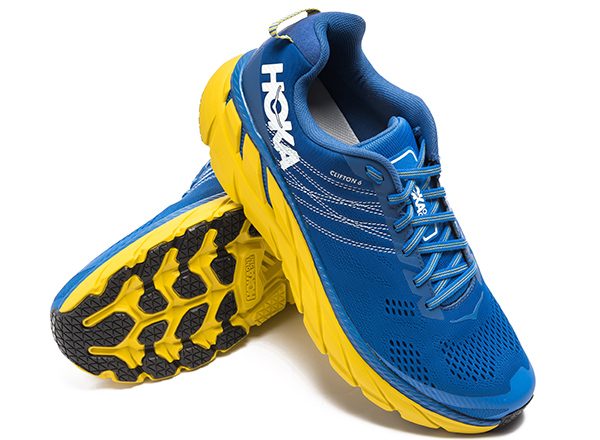 Despite their ‘maximal’ appearance, the 285g Clifton 6s offer a deceptively-responsive ride. Hoka did away with printed overlays from the Clifton 5’s upper and stuck with embroidery, which we found soft and breathable without causing midfoot blistering or discomfort. Although the high stack takes a little getting used to, the cushioning felt just right on our test runs. Hoka’s heel-to-toe ‘Meta Rocker’ tech combines with soft EVA foam to provide a cushioned but responsive ride, without deforming or feeling squishy towards the end of long runs. A heel loop is the finishing touch of a great tri shoe. 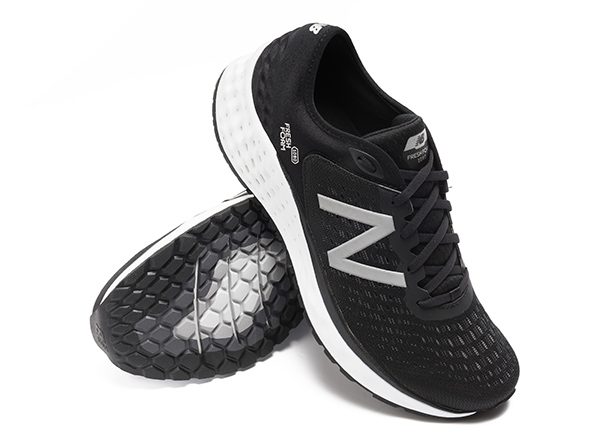 At 322g the latest Fresh Foam 1080 is lighter than the previous edition, with an 8mm drop and a full-length Fresh Foam midsole. Those with wide feet will be happy that they come in four different widths, including an X-Wide version. The cushioning is balanced and offers plenty of energy return during faster efforts. But we did suffer some discomfort around the heel due to the rather rough material on the upper, and there’s no real padding so we wouldn’t want to be putting these on without socks. We also felt some discomfort due to the overlapping materials on the midfoot.

Verdict: Nice, stable cushioning, but the heel counter dug in 77% 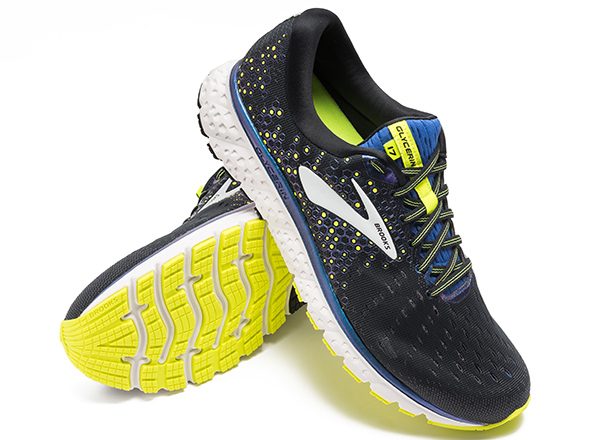 It’s testament to the popularity of Brooks’ Glycerin that it’s now in its 17th iteration, and there’s plenty of interesting tech that makes it one of the comfiest shoes we’ve tested. Brooks’ ‘DNA Loft’ cushioning was introduced in 2018 for runners who demand the softest feel underfoot, and blends EVA foam with rubber and air pockets to reduce the weight. It’s extremely plush and, paired with the new OrthoLite sock liner here, we found them fine sockless. There’s also plenty of grip for running on hard-packed trails and grass, but one criticism would be the extra weight (348g).

Verdict look no further for support and cushioning 89% 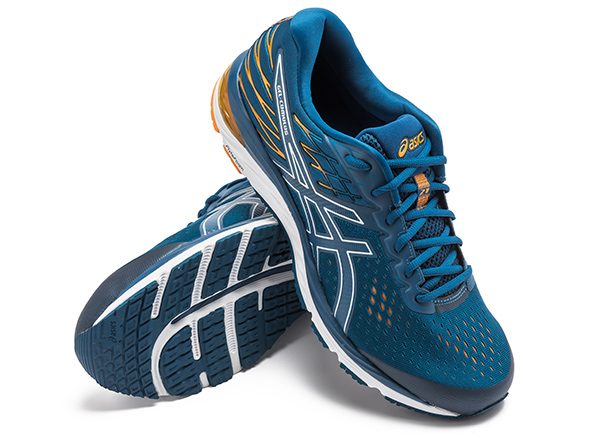 The Gel-Cumulus is one of Asics’ most cushioned and supportive shoes, with their ‘FlyteFoam’ midsole tech combining with their trademark gel at the rear and forefoot to provide extra shock absorption. While the shoe feels cumbersome on all-out efforts it does offer a comfy landing and does so right through to the end of long, steady runs, which’ll be especially welcomed by heel strikers. We didn’t find the upper the most breathable, but it stands up to bad weather. Overall, the robust build and comfy liner make the 21 one of the best all-round training shoes in Asics’ range.

Verdict: Not a speedster, but a highly-durable shoe 85% 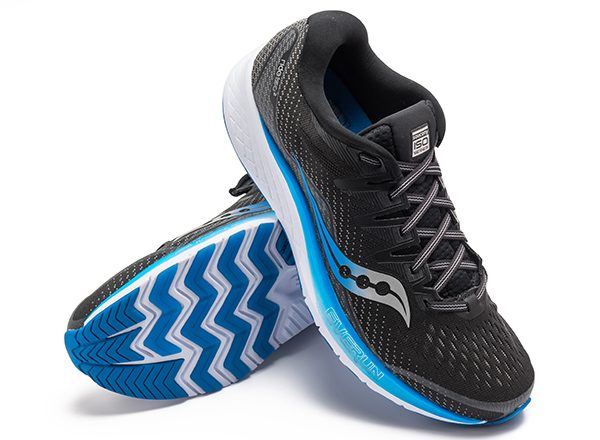 Described as a neutral training shoe with moderate cushioning, the ISO 2 is also recommended for underpronators thanks to the evenly-distributed cushion with an 8mm offset from heel to toe. Like the Brooks Glycerin, this is another shoe with soft cushioning, thanks to the combination of the PWRFoam midsole and Everun topsole construction for pressure relief. It’s not overly bulky and we still felt fast. The upper is made from stretchy mesh and is secure, comfy and breathable. The sole pattern is particularly grippy in the wet, making this an all-rounder for training and racing. saucony.com/uk

Verdict: A luxury upper and the best for neutral runners 87%

The 10 pairs of mile-munchers on test all possessed supportive qualities that we’d look for in an everyday running shoe. Our feet didn’t get on so well with some of them, but we took into account whether they would work for other types of runner, and consulted running mates to try those we were unsure about. All are between £110-£140, so price was less of a factor in determining our final scores.

We were big fans of the cushioning on the Brooks Glycerin, and for steady runs these were our favourites. Hoka’s Clifton is an appealing long-distance shoe option for neutral runners. The Saucony Ride ISO 2 and Asics Gel-Cumulus 21 also come highly recommended and, if you’re a mid to forefoot striker, then Newton’s Kismet 5 are worth trying to complement your stride.

Our overall winner is On’s Cloudswift. There are lighter shoes in On’s range, but there’s something in those pods that just give a lovely spring to your step, providing the best energy return of all the shoes on test. The upper is also the most comfortable we’ve ever tried in On’s range, and it’s also super flexible to make getting them on in T2 a breeze.