Polar will forever be synonymous with changing the way elite and recreational athletes train. Where once you were reliant on feel and intuition, Polar’s creation of the first-ever heart rate monitor back in 1977 provided the platform to accurately hit training zones and enjoy the respective performance benefits, whether that was speed, stamina or strength.

Fast-forward 37 years and, certainly in the multisport world, Polar’s mantle as the leading authority on sports technology has been wrestled away by Garmin. While Garmin spotted the sporting benefits of GPS with their Forerunner range – especially when integrated into one unit – Polar lagged behind, and when they finally joined the GPS data party, it comprised a wristwatch plus GPS arm unit. Finally, they released the RC3GPS – which was an impressive first all-in-one stab.

Now they’ve taken another giant leap with the V800…

Let’s start with its appearance. For a man whose wardrobe oscillates between grey, dark green and brown, I was surprisingly taken with its urban looks. The blue strap flows into a stylish silver fascia with the screen forged from Gorilla Glass. A degree of research reveals the latter’s name derives from a ‘gorilla’s attributes of toughness and beauty’. In short, it’s damn tough and should resist the heartiest of bike crashes.

As for features, that’d require an issue in its own right. So we’ll focus on the most useful and groundbreaking, beginning with connectivity. The V800 sends and retrieves data via Bluetooth, meaning you can send information direct to hardware like the iPhone (4S and above). That opens up a whole world of metric-heavy apps, not just Polar’s Flow app but also third-party offerings. This is a significant step forward as for years Polar persevered with their Wearlink system, which worked fine but was highly limiting.

This Bluetooth signalling also picks up a range of other data-collecting hardware, including cadence sensor, speed sensor, power meter and stride sensor. UK and extras pricing was TBC at the time of press, but the European cost is €399.90 (€449.90 with heart rate sensor), with the Stride Sensor an additional €69.90.

One of the RC3GPS’s flaws was speed of satellite pick-up. It’d gauge the usual GPS metrics with impressive accuracy… but often about 5mins into the session, diluting the usefulness of post-effort analysis. It’s where Garmin has clearly stolen a march, but that’s changed with the V800. Within the shadow of our home’s eternally damp walls, speed, pace and distance data appeared almost immediately.

“That’s down to a piece of technology entitled ‘Siri Instant Fix CGEE’,” says Elizabeth Shenton, product expert at Polar. “It also calculates and saves satellite information for three days.” Consequently, as soon as you switch it on, you’re ready to record and run. That satellite pick-up reveals the usual GPS Pandora’s box – speed, average speed, altitude, distance… – plus a couple of extras.

The ‘Back to Start’ function gives you the most direct route back to your starting point, which is useful if you lose track of time and need to return at speed, like a lunchtime run when an early afternoon meeting looms. There’s also the ‘Route Guidance’ feature where you can follow recorded routes. Later in the year this’ll extend to creating bespoke routes via the Flow website and sync them to your V800’s favourites folder.

You have numerous data field options, which are easy to see and change on the fly. Ours included a heart-rate data screen as we tested the HR version. You can purchase it without, though you miss out on a multitude of useful features if you don’t, including its lifestyle assessment.

Monitoring your ‘lifeload’ is becoming an increasingly popular sector. Devices like Nike’s Fuelband, FitBit and Polar’s own Loop gauge your activity throughout the day, including sleep. It’s the same with Omegawave, which we tested back in issue 286, where Polar’s Finnish counterparts determine your readiness to train by measuring heart rate variability, achieved by you undertaking a test on waking where you lie down for several minutes while the chest sensor calculates your state of wellbeing. It’s the same template with the V800, where you undertake what they term an ‘orthostatic test’ first thing in the morning after a recovery.

“The test reflects the autonomic regulation of your cardiovascular system,” explains Shenton. “The peak heart rate and standing heart rate are good indicators of disturbances in the autonomic nervous system. For example, fatigue or overtraining.”

It’s a relatively useful feature, though, like with the Omegawave, we have concerns regarding its precision when measuring overall state to train. It’s all very well measuring heart rate variability to assess cardiovascular readiness, but it’s not a clear gauge of your neuromuscular system – meaning a week of lactic-producing intervals may have your muscles feeling battered but the results will tell you you’re fine. There’s also increasing evidence that markers of readiness to train are related to your hormonal profile – levels of testosterone versus cortisol, for example – and aren’t clearly shown by a change in heart rate.

The accuracy of your recovery status is purportedly enhanced if you wear the watch 24/7. Accelerometers within the V800 offer feedback on your sleep quality via nocturnal movement. Again, there are question marks over accuracy as gauging sleep quality based purely on movement is statistically dubious. However, the results we gleaned over our testing period matched our feel, so time could prove us wrong.

You can download each session directly to an iPhone (4S and above) via the Polar Flow app or to the Polar Flow website. On the phone you can briefly assess your efforts; online you can analyse in more detail. 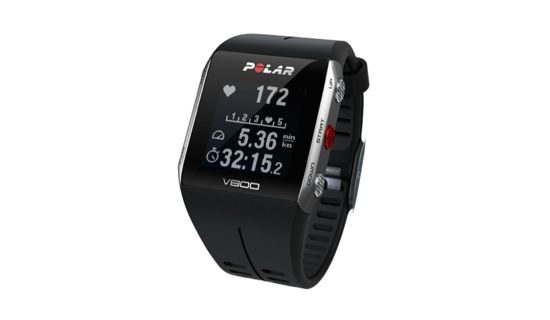 Here you’re presented with a variety of accessible graphs and data in addition to the usual maps and summary information, and you have access to social media, highlighting its Strava appeal. There’s also a rather nifty feature entitled Polar Beat, where you can download your workout, complete with an image or two, which then replays your session against a funky soundtrack. It’s of absolutely no practical use whatsoever, but it’s still a rather cute touch. In the past we’ve used Polar’s personal trainer online analysis site and we must say this is far more appealing and usable.

What’s less impressive is battery time. When GPS is in use, you have 14hrs of life compared to the Garmin 910XT’s 20hrs. This seems a faux pas from the Finnish giants for a watch so heavily skewed and marketed at triathlon. Look online and you’ll discover myriad Polar V800 clips featuring Ironman World Champ Frederik van Lierde. Ironman cut-off times are 17hrs and many Challenge races are 16hrs. Take Challenge Henley 2013 as an example. Of the 358 full-distance finishers, 55 crossed the line past the 14hr mark, making the V800 redundant for about 15% of the field. Extending this lifeline should be a priority in future incarnations.

Bluetooth connectivity means you might require the USB clip for charging only, but it’s a good one, the hefty clip solidly clamping the unit in place.

The V800 could signal Polar’s multisport renaissance. It looks the part, is highly usable and has numerous features to satisfy the most data-savvy triathlete. Drawbacks are few and far between, but they are significant and need rectifying in V800 version 2. Firstly, battery life – 17hrs plus next time please. Also, increasing swim data to include aspects like stroke count rate is the minimum they need to truly challenge the Garmin 910XT as the ultimate triathlete tool.