Altitude training is a popular, potent and well known tool of pro athletes. By sleeping and/or training at high altitude (over 2000m) where there is less oxygen available, the body is forced to adapt by making more red blood cells which improves your performance potential.

Altitude camps are expensive and impractical for amateurs, though, which is where altitude simulation products come in. The Oxyhood fits to your single or double bed creating a chamber into which hypoxic (low oxygen) air is pumped from a generator, simulating high altitude (over 5,000m is possible, though 2,500-3,000m is recommended) so you can get fitter in your sleep. The Armavelo is a huge pop-up tent designed to go over a bike on a turbo trainer, allowing you to train at altitude. Both tents are easy to erect and to fold away. Mo Farah is an obsessive user of the Oxyhood and the treadmill version.

There are various schools of thought on altitude training and sleeping – sleep high, train low; sleep low, train high, etc. Individual responses to sleeping high can vary, whereas the benefits of altitude training are very consistent. However, at altitude it’s near impossible to generate the same level of training stress so while your blood’s oxygen carrying capacity will increase on a camp your fitness level may not climb by as much as you’d hope. In this respect, altitude simulation is potentially even better than a fortnight in Tenerife (weather aside) because you can sleep and train high for the blood boost, also train low for the intensity, and still go to work in between.

We’ve been testing the system for several months, working with TrainSharp Coaching to analyse the benefits in my power data and VO2max. Crucially, I was already at peak fitness for the start of the test and no longer accumulating chronic training load, so the results can’t be affected by a change in training during the test.

There are two sides to this test: whether it works and also whether you can live with it. Your partner may not want to share the tent or be happy about you sleeping in the spare room (as I did) and we’re told that’s the most common hurdle. The generator emits only a low drone and it can be placed several rooms away on a long hose (ideally somewhere cool but dry, with an exhaust hose out a window), so it’s the puffing of the air into the tent that’s more disturbing and the optional muffle bag all but eliminates that. The first night is very tough but I soon got used to it and after five nights slept normally.

Oxyhood advise ensuring you get a full eight hours and that if you’re prone to sitting up late fiddling on a laptop to do so in the tent to maximise your hypoxic exposure. That really warms the air in the tent, though, so a good tip is to open it right up and let fresh air in to help you get to sleep. The generator will have you back at 3,000m in 10 minutes. 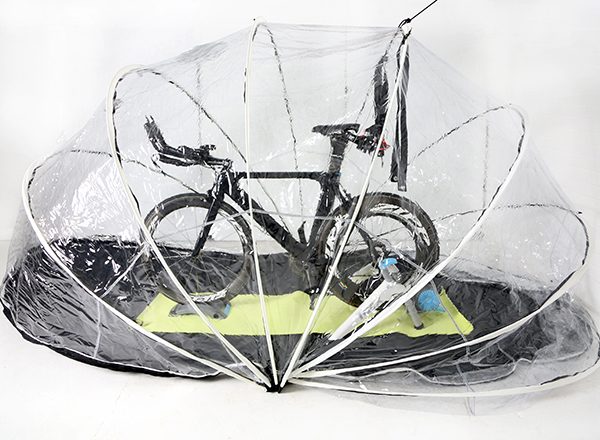 The Armavelo is potentially even more potent but also harder to use. For a start, it’s the size of a car – is your garage tidy enough? I put it in an empty double bedroom that had been a home gym. It’s long enough for a turbo, bike, fan and a stand for a laptop, but it’s low: my head touches the roof if I’m riding on the hoods. Using an aero position is ideal. Training in the Armavelo is very hard; Z2 feels like Z4 and it gets incredibly hot and sweaty. It took three sessions to build up to lasting an hour and I found it impossible to do intense efforts. Luckily, there are still significant gains to be had from doing an hour of Z2 twice a week. It’s worth noting that I hate indoor training anyway, so if you do a lot then you’re likely to fare better.

And does it work? Emphatically, yes. After just one week of sleeping in the Oxyhood I did a huge power PB to win a bike race from a solo break (383W for 35mins) and felt in control doing it. I felt like Superman, it was amazing. Numerous other races backed this up, especially at the UCI Age Group World Champs where I was fifth in the TT, far above expectations. On training rides my heart rate is generally lower and when I’ve travelled and ridden at altitude I’ve not suffered. The before/after lab test data was unfortunately skewed by an illness just before the closing test (a risk of a long test period) but despite not feeling great and reduced training my Maximal Aerobic Power matched the first test when I was tip top. What’s more, my VO2max increased by a significant amount from 85.3 to 88.9ml.kg.min.

This is an expensive set-up to buy, though less costly than a set of top-end wheels and it will do at least as much for you. Better still, you can rent a set for £180 per month to use ahead of your biggest season goal – that makes a lot of sense for triathletes. It’s easier to learn to use and more directly beneficial than a power meter, and Oxyhood provide excellent personal support as well.

Verdict: Potent training tool for the serious athlete and still not as costly as top-end wheels 90%

Debbie Graham is the senior digital editor for YourHomeStyle, and is passionate about vintage interiors. In her free time she loves nothing better than scouring second-hand and vintage shops for bargains and upcycling projects. Her home is a Victorian house that is a bit of a project and when she's not putting buckets under leaks you can find her painting and patching