Carbohydrate energy drinks taken during endurance exercise are scientifically proven to delay the onset of fatigue, thus enhancing performance. But while carbohydrate drinks are popular among triathletes, there are some major drawbacks.

For starters, water is heavy stuff; lugging enough carbohydrate drink to fuel a race is no fun if the feeding stations only offer water. Also, there’s only so much fluid you can drink for energy without craving something a bit more concentrated.

So long as there’s plain water available for fluid replacement, the smart alternative is to consume energy gels (that said, some of the gels here from CNP, SiS, PowerBar and OTE contain significantly more water per gram of carb than others and would fuel shorter races or training sessions in cooler conditions without needing extra water).

Like carbohydrate drinks, gels provide rapidly absorbed carbohydrate, often with electrolyte minerals included. But with far less water, the carbohydrate in gels is more concentrated and portable; two or three gel sachets weighing around 100g in total contain as much carbohydrate as 1kg of carbohydrate drink, which explains their popularity among triathletes wanting to carry them on the bike and run.

In terms of how many to use, when looking at standard gels – those containing maltodextrin only and not a 2:1 formulation – the maximum total amount of carbohydrate the average athlete can absorb is around 60g per hour. Work out how many sachets an hour provides this amount (e.g. 3 x 20g, 4 x 15g) and aim for this as a maximum amount, consuming them evenly across each hour.

If you consume all of your carbohydrate in gel form, top up with plain water rather than carbohydrate drink (which would supply surplus carbohydrate). Consume too much carbohydrate and it won’t be absorbed – indeed, it could even upset your stomach.

The downside is a bulkier and heavier sachet, making it less portable and tougher to stash in the back of a tri-suit. Unusually, SiS’s gel also contains artificial sweetener in the form of Acesulfame K, which may be off-putting to some and has attracted criticism.

The sachets opened fairly easily, yielding a delicious pineapple flavour. These gels were also low in acidity, making them very easy on the stomach.

Verdict: Great taste and texture, but quite bulky and not additive-free, 83%

There’s also 50mg of caffeine from natural guarana extract, along with vitamins B3, B6 and B12, all of which are necessary for carbohydrate metabolism, with a small amount of sodium too.

As its name suggests, Hydro Max contains more water than standard gels, resulting in an easy-to-consume formulation. While opening wasn’t easy, the reward is a light, refreshing taste helped by an authentic blackcurrant flavour. 8.6p per gram of carbs is high, but it’s a quality product.

It features two nifty easy-opening options – one tear line for sipping and one for gulping – which isn’t something on offer from other brands.

Although not the most compact sachet, it’s successful in use on the move, as were the contents; the consistency is light and refreshing while the flavour is very natural indeed, with a low acidity. A slight downside is the 7.1p per gram of carbs – up towards the top-end of those tested.

Verdict: Easy on the stomach with a great formulation, consistency and taste, 90%

Although not a 2:1 glucose-fructose blend, High5’s philosophy is that, in practice, few athletes consume more than three gels per hour, making a glucose-only formulation perfectly acceptable.

The compact pouch size is easy to carry on the move and swift to open. The price of 4.3p per gram of carbohydrate is easy on the pocket as well. Even better, the consistency was light and easy to gulp, with a taste that’s very natural and not too sweet.

Verdict: A good value, nice-tasting gel that’s very easy to use on the move, 86%

Although bulky, you’d only need one or two of these per session, so portability isn’t an issue. The sachets open easily and the ‘no-spill’ design is very welcome. The consistency is light and refreshing, while the cola flavour is decent enough.

Unfortunately the high sodium level is quite noticeable and made for a strange salty aftertaste. It’s not a major issue though, and this is still a recommended alternative to the fruit-based offerings here. 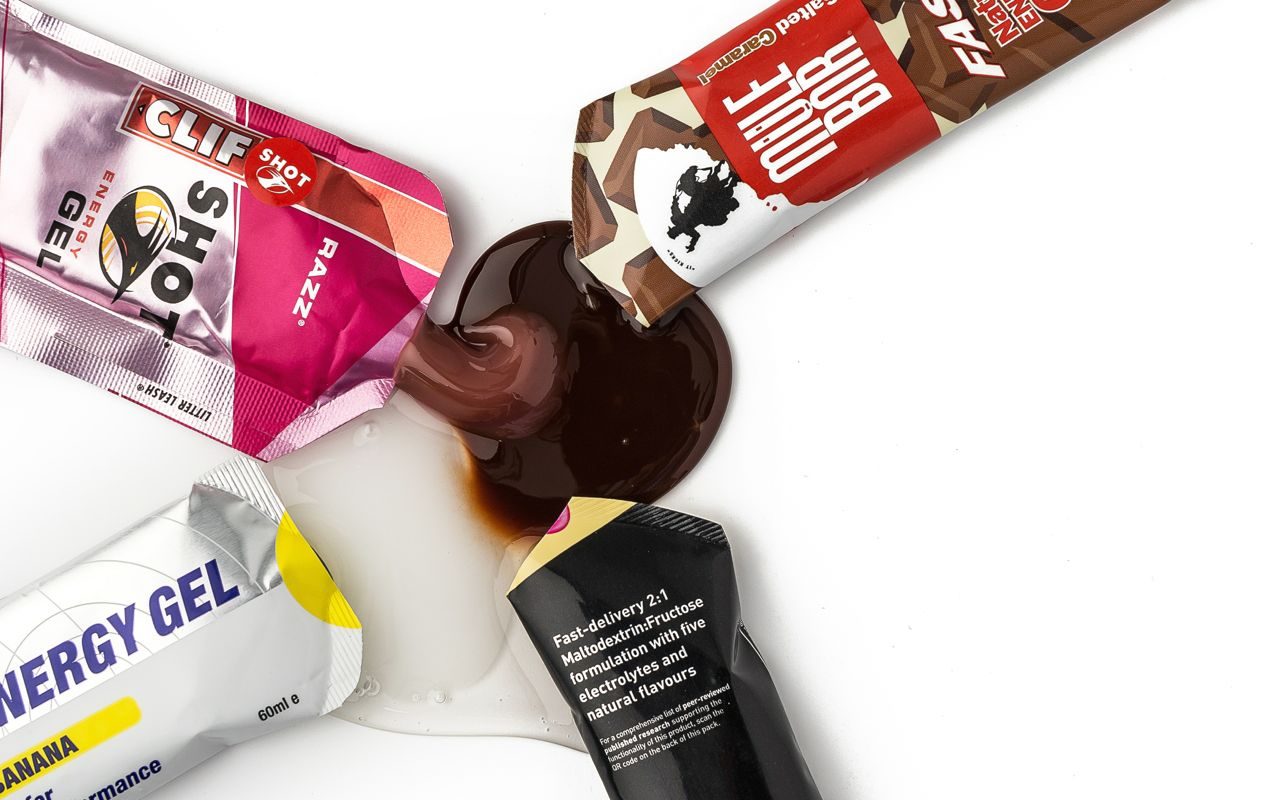 We continue our guide to the best energy gels of 2015…

Particularly smart is the ‘no litter’ design. Open the sachet (which is extremely easy) and the removed tab stays attached – no more sticky gel tops to carry!

The concentrated formulation makes for a very thick consistency (you’ll need water with these), which also had a slightly powdery aftertaste. The raspberry flavour is very authentic but sweet, all of which resulted in a rather rich and sickly experience overall. The 6.6p per gram of carbs is fairly high too.

Verdict: Portable and well-packaged, but consistency and taste may be off-putting, 76%

Tested on the move, these gels are easy to carry and open, with a consistency worth praising for its smoothness and refreshing quality without being too watery.

The lemon and lime flavour is very tangy and authentic, although with tanginess comes acidity – which isn’t so welcome for sensitive stomachs. The main downside, however, is cost – at 7.3p per gram of carbohydrate, these don’t come cheap.

Torq’s raspberry ripple flavour gel is another 2:1 maltodextrin/fructose formulation, with each relatively compact 45g sachet delivering no less than 28.8g of carbohydrate.

In addition, Torq adds the five electrolyte minerals (calcium, magnesium, potassium, sodium and chloride) to its formula, while the raspberry flavour is derived from natural ingredients.

In use, opening the sachet was a little fiddly and resulted in sticky hands. The ingredients are highly rated, however; despite the relatively high carb content, the consistency is smooth and light to swallow, while the taste is excellent – packed with natural raspberry flavour, but not overly sweet. 5.4p per gram of carbs is competitive as well.

Verdict: Excellent formulation, consistency and taste at a decent price, 88%

Using all-natural flavours, the material value on offer is clearly excellent at just 2.9p per gram of carbohydrate. However, the consistency is rather thick, with an unwelcome powdery texture.

The banana flavour is authentic, but was somewhat overpowered by the sweetness, making for a slightly sickly sensation overall. The sachets are also quite a struggle to open on the move. All of which is disappointing, given how much we rate their Kiwi gel that topped our grouptest scores last time around.

Verdict: Lots of carbs per buck, but falls short in taste, consistency and portability, 70%

The standard of gels continues to rise, but which will we be slurping this season?

Reaching a definitive conclusion in a test like this is no easy task, especially given that characteristics such as taste and consistency are very subjective in nature. There’s also the issue of cost – important if you’re a keen gel user. Among the group of 10 here, however, certain gels impressed.

Of the caffeinated gels, CNP’s Hydro Gel Max offered a great taste and consistency, with a natural formulation to boot. Of the low-water gels, Torq’s offering had an excellent raspberry ripple taste, a very smooth consistency and a great formulation.

High5’s energy gel, meanwhile, is a good all-rounder: compact and easy to open, natural ingredients, pleasant tasting and good value. If you’re sick of fruit flavours and prefer a thick gel, check out Mule Bar’s salted caramel gel. It’s not the smoothest consistency, but its taste is very moreish and it should be very appealing in cooler conditions.

For a lighter, more watery gel, OTE’s blackcurrant gel is well-crafted with a superb taste and low acidity – perfect for sensitive stomachs. And it’s this gel from the Lancashire-hailing brand that takes the honours in this hotly-contested face-off.

What’s in an energy gel?

Energy gels: what you need to know