Whether you’re overtrained or plain old tired, exercising can be a slog when energy’s low.

Any food with a decent amount of carbohydrate in it will help, and an energy bar is simply a specific blend of ingredients pressed into a rectangle. We triathletes are a demanding lot, wanting fast- and slow-release energy, big snacks, little snacks, snacks with vitamins, that are low-fat, organic, easy to carry…. There’s a massive range to choose from, but no one bar can meet all our demands. Primarily, as we can’t store much of the carbs we need on longer/harder sessions, bars are an easy and portable solution. Their basic job is to get us through a long bike and/or run session, so it’s this – and extra factors like how processed or natural the bars’ ingredient list is – that we’ve focussed on in our test…

Research suggests that the body absorbs more carbohydrate during exercise if more than one type is consumed, and it’s this research that PowerBar have utilised, including both glucose and fructose carbohydrates in this 55g bar. A sodium level of 220mg is a welcome addition and will support the absorption of fluids, but the added magnesium isn’t 20% of the minimum daily requirement and so is unlikely to ‘support energy metabolism’ to any great degree. Despite coming from such a super-brand, the major issues are basic. It’s big, sticky, chewy and impossible to slide out of the packaging, so you need two hands

to eat it – less than ideal for a bar aimed at the endurance market. It also looks and feels over-processed and has by far the longest, least natural list of ingredients.

Verdict: It’ll give you energy, but too many issues to be a contender, 75%

This 45g bar is made with Fairtrade mango, natural ingredients and is very low in fat (just 1.1g, which should aid faster energy absorption). The all-organic ingredients used contain no additional ingredients, but its non-organic rivals can come fortified with vitamins and minerals and contain ribose, which research suggests may support cellular recovery after endurance training. While the bar is chewier than some on test, the packaging is easy to open on the bike, the size is appropriate and the nutrient profile is spot-on for the job this bar was designed for. Commendably, UK-based company Torq also produces a free, clearly presented guide to sport nutrition to help customers understand the products, how to use them and sports nutrition as a whole.

Verdict: Chewy but well-formulated, and with a free detailed nutrition guide available, 87%

New brands like OTE have to look to deliver traditional products in an innovative way to gain traction in a crowded industry. And they’ve done just that, by cutting this 65g bar into two equal pieces, a simple idea and one that falls in step with nutritional advice to drip-feed energy into your body during exercise. Sadly, with a distinct lack of whole foods, the bar doesn’t measure up to the inventive packaging. For us, it’s too processed with two emulsifiers and 10 ingredients (and these 10 are made up of a further 17 ingredients), the chocolate drops melted in our pocket on a warm day and, while the claim of ‘low fat’ (4g) might be true, it’s still higher than other bars here. OTE’s taste intentions are commendable, but overall this doesn’t rival the finest here in terms of natural fuelling.

Verdict: Points for design, but just too processed for our tastes, 76%

A great energy bar needs to provide quick-release energy and slower-release energy to fuel for longer, while also being nutritious and offering the vitamins and minerals the body needs to effectively perform. Often, quicker-release carbs have their nutrition processed out of them, but Honey Stinger have added an impressive 23 vitamins and minerals. This can leave bars tasting metallic but, despite only having five other major ingredients (the least on test), they balance out perfectly in this 50g bar to make the nicest-tasting offering here. It feels wholesome enough to be a pre-training snack, while its consistency makes it an easy eat in training. Sounds like a winner, until they dipped the bottom in chocolate, which makes it less healthy and a sticky mess on a warm day. So close!

Verdict: a good option, but lose the chocolate base to make it a real contender, 83% 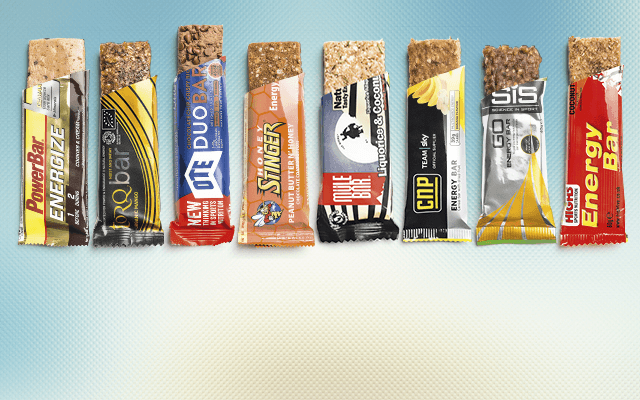 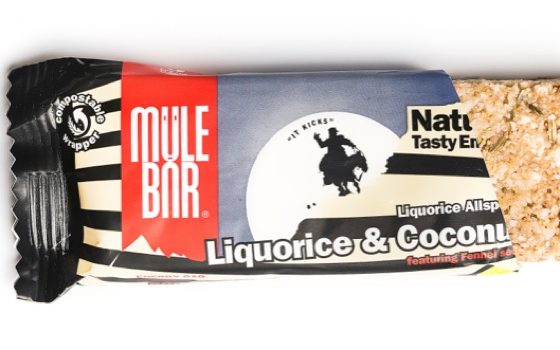 UK-based MuleBar led the boom in natural sports food and it’s great to
be able to see real ingredients as you open the (compostable) wrapper. The liquorice flavour of this 56g bar will polarise opinion, but didn’t sit well with us on or off the bike. While being the most calorific and having the most fat (9g) on test isn’t necessarily a bad thing, the highest saturated fat statistic (6g; High5 comes second with 3.4g saturated fat) isn’t optimal. Mule also don’t fortify their bars with vitamins, minerals or other additional ingredients that might support performance, as some of the other manufacturers here do. If you like it, this MuleBar is a reasonably healthy snack, but the lack of a particular strength ultimately means that, whatever your needs, there’s probably another bar that does it better.

Verdict: Natural ingredients, but we’re not convinced by the taste, 77%

CNP was a fairly small UK-based firm that specialised in bodybuilding nutrition, until it was approached by British Cycling to develop products specific to their needs. Currently, you could put the Team Sky logo on pretty much anything and sell a shedload, but does CNP’s commercial success mean the products are any good? Unwrapping the product is easy and the bar that emerges has just the right amount of banana flavour, the consistency is balanced – neither too sticky or too dry – and it looks pretty much like something you could have made yourself, which is usually a good sign. For its 56g size, it also packs a high proportion of carbohydrate (39g) and, while there’s some sunflower oil added, it’s far less than most bars here, with the fat content coming in at 2.4g.

Verdict: Not perfect, but a great all-rounder that’s endorsed by the best, 91%

It doesn’t always take much to be innovative, and UK-based SiS have simply released a smaller 40g version of their popular Go Bar. SiS aim to ‘Deliver Superior Nutrition’ and, in the case of this little bar, they does just that. The apple and blackcurrant flavour is zingy rather than sweet, which is refreshing, not too sticky or chewy, and slides out of the packet easily. It has slightly more ingredients than CNP, but it’s still pretty low (a good sign) and is arguably up there with Mule as the most ‘natural’, while being a much better bar for fuelling long-duration and high-intensity exercise. It’s not ideal as a snack between meals due to its high GI rating but, with 26g carb content, as a sports energy bar it’s great. Only the addition of added vitamins and minerals would make it better.

More practical size than its big brother, but more vitamins would be welcome, 88%

If you’re looking for an easy-to-eat, pleasant-tasting bar, then this is a good option. The coconut flavour High5 Energy Bar isn’t sticky, slides out of the simple-to-open packet well, feels light and easy to digest, and you can really taste the impressive 60% dried fruit ingredients. It offers a good amount of carbohydrate, but 41g might be a little too much to be eaten all at once during a hard endurance session. Overall then, this is a reasonable all-rounder and will fuel you well before, during or after sport.

Verdict: A decent-tasting, high carb content bar, if too high in omega-6 oils, 82%

Collagen: What it is, what it does and why athletes should consider taking it