Will these wheels turn crosswinds into free speed? We take a look at some unusual wheels from 2-Spoke

This article originally appeared on www.bikeradar.com

Dutch company 2-Spoke recently sent in a set of its unusual — no prizes for clever marketing here — two spoke carbon wheels for review and as fans of unusual new tech Jack Luke from our sister title Bike Radar pulled them aside to see what all the fuss was about.

Aimed squarely (roundly?) at the time trial and triathlon market, these wheels claim not only to be the fastest wheels available, but that they “generate speed” in crosswinds.

Although the wheels may resemble the slightly lumpen looks of a MK1 Fiesta steering wheel, 2-Spoke claims that the M5 Two Spoke has “the lowest air resistance of all existing wheels compared to 12 or 16 steel bladed spokes or 3, 4, 5, or 6 carbon bladed wheels and even disc wheels.”

In real world terms — though we have doubts that most riders would be able to maintain such a pace — the 2-Spoke M5 wheels are claimed to save up to two and a half minutes over a ‘typical’ carbon three spoke wheel in a one hour time trial when averaging 51km/h.

In independent testing, the 2-Spoke M5 was also shown to be the best performing in a series of crosswind “ramp time” tests — the measurement of how long it takes for a wheel to slow down from a starting speed to a determined minimum speed, e.g. 56km/h to 26km/h, in a 90-degree crosswind.

During these tests, it was also revealed that “thanks to the wing shape of the two aerofoil spokes… the 2-SPOKE wheel was in the tests also the only wheel which generates speed.”

Owner and designer, Bram Moens goes on to explain that this phenomenon is dependent on the angle at which the crosswind hits the wheels and was only observed at angles between 10 and 170 degrees.

While this all sounds very promising, we are understandably somewhat skeptical that the wheels will spin like their homelands iconic windmills when presented with a gust of wind. 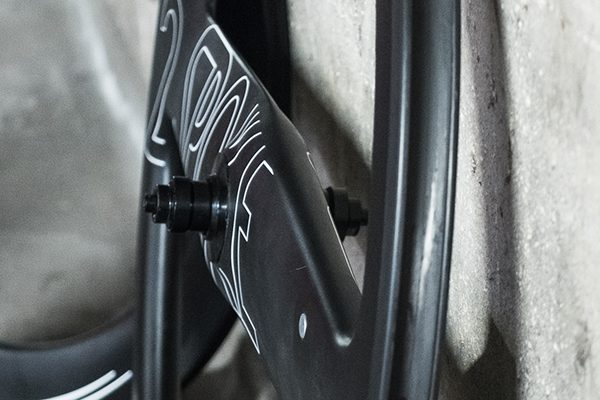 If you’re interested in learning more about the design and testing of these unusual wheels, we recommend you check out the explainer on the 2-Spoke website, which goes into a lot of depth about “wetness” and “optimal aero-dynamical properties”.

In a world increasingly dominated by impressively fast, mid-depth aero hoops, these are pretty bold claims — claims that we will be testing out over the next few months.

The wheels are available for either clincher or tubular tyres and track or road use. The clincher wheels are also available with a disc-brake compatible hub. Our clincher rim brake wheels weighed in at 1,018g for the front and 1,088g for the rear.

What do you think of the wheels? Would you be willing to accept the slightly unsettling aesthetics in the name of pure speed? As always, leave your thoughts in the comments below.

Bike race wheels: how to choose the right ones