Putting to bed one of the worst-kept secrets in cycling, SRAM has finally come clean on its new Red eTap 11-speed electronic drivetrain.

The system also includes satellite shifters, called Blips, which are wired either to the shifters or to a Blipbox junction that transmits the wireless signal to the derailleurs. These coin-sized Blip shifters can be placed anywhere, and have already been seen in use on pros’ time trial and triathlon bikessuch as Kristin Armstrong’s machine.

SRAM has debuted the eTap system in its top-end Red form only, although Force eTap and eTap with hydraulic brakes seem likely in the future. For now, SRAM said Red eTap will appear in stores and on complete bikes this coming spring. 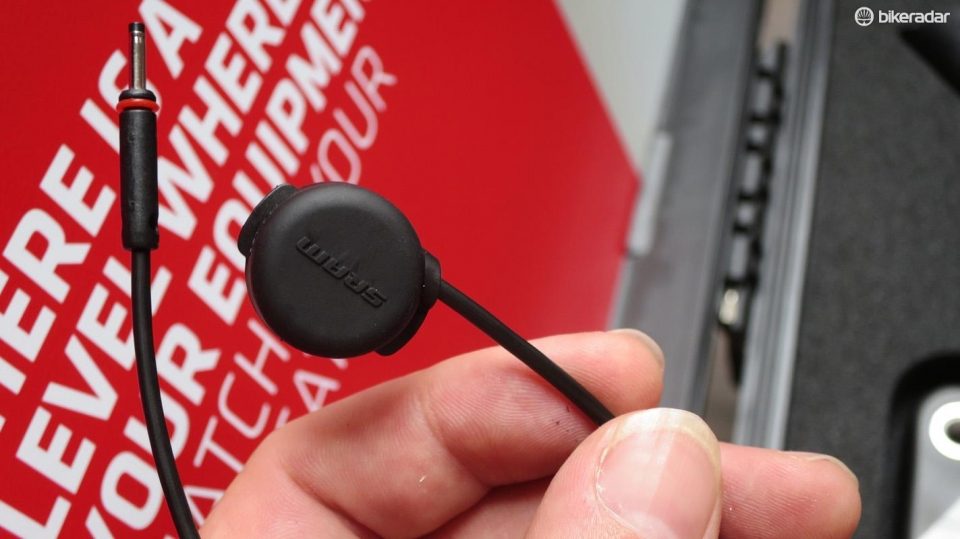 The eTap system does not need cabling and housing, of course, which saves 115g. So that gives you 686g for eTap vs 609g for Red 22, taking into account levers, derailleurs and (for the mechanical groupset) cables/housing.

The front and rear SRAM Red eTap derailleurs use direct-mount batteries and communicate wirelessly with the shifters. The rechargeable batteries are interchangeable, so if your rear battery died you could switch it with the front battery and still have 11 gears to get you home.

Despite the relatively small size of the batteries compared with Shimano Di2 and Campagnolo EPS power sources, SRAM claims a run range of 1,000km or 60 hours of constant use. The system comes with a USB recharger.

The levers, meanwhile, house CR2032 coin batteries to power shift commands. The CR2032 cells are claimed to last for around two years. 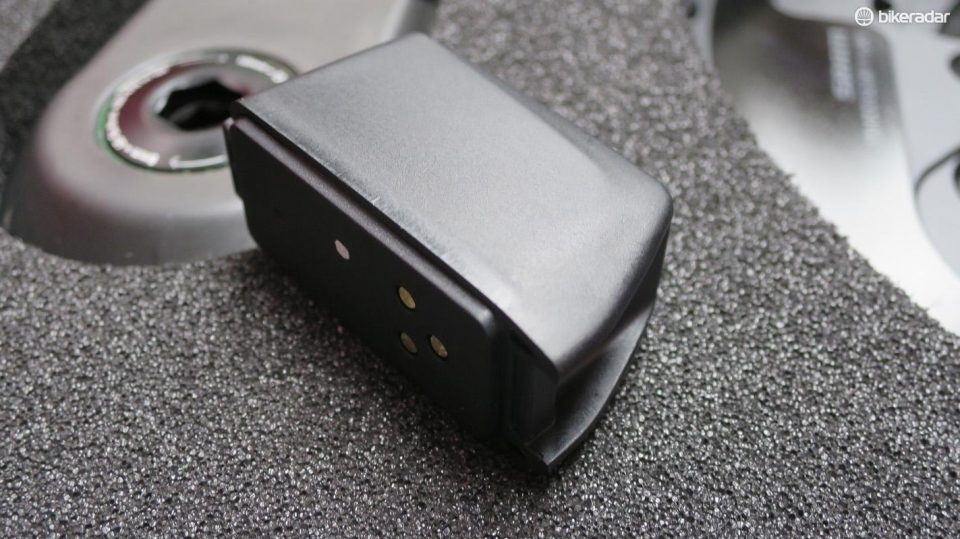 SRAM has achieved this long battery life by including accelerometers within the eTap derailleurs. These enable the drivetrain to enter a sleep-mode when not in use, unlike rivals systems, which are constantly on. As soon as the bike moves the system wakes and is ready to operate.

The drivetrain has been in development for more than five years, with lab and in-the-field testing ongoing since 2011.

“With eTap, we were really working with a blank sheet of paper that meant we could look at the way in which shifting happens,” he added. “We soon realized we didn’t need to emulate our mechanical system.”

Menna said that SRAM’s advanced development and new technology team waded through some 250 existing electronic shifting patents, testing the competition, riding them hard and taking them to pieces. The upshot of this was developing a new way of shifting gears. 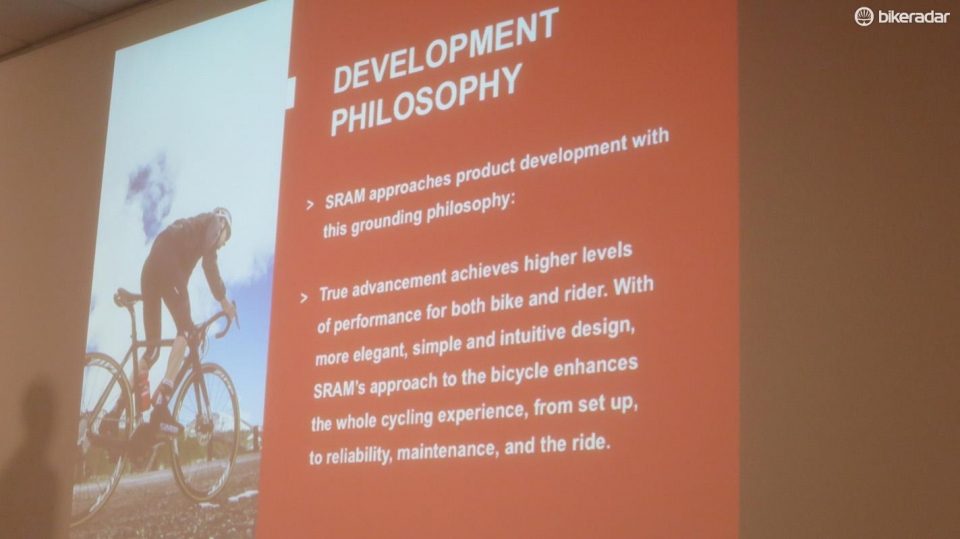 “Shifting is simple: the left paddle handles upshifts, the right paddle downshifts, and pressing both together shifts the front derailleur to its alternative position,” said Menna.

Installation also appears relatively simple. We watched SRAM mechanics fit a system from scratch. It takes longer to take your old components off than it does to fit Red eTap, with its zero wires, zero tape, and zero zip ties.

If any adjustment is needed, holding the Function button  enables ‘micro-adjust’ mode, which moves the derailleur either inboard or outboard 0.25mm. This can also be used when riding, so gears can be adjusted on the fly.

Satellite shifters and the Blipbox

SRAM Red eTap also has remote satellite shifters, called Blips, which can be fitted wherever you like. They’re about the diameter of a 10p piece or a quarter and can sit under the handlebar tape or above it. 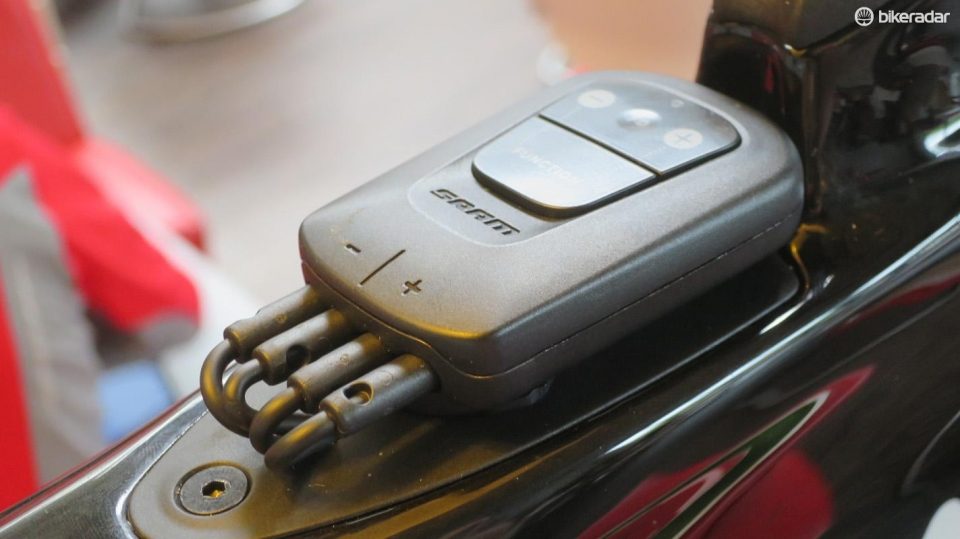 With the eTap road group, the Blips are wired into the levers. For time trial and triathlon, the Blips can be used alone, wired to the Blipbox that transmits the shift signals to the derailleurs.

SRAM developed its own Airea wireless protocol in-house. This meant recruiting experts in the field, including computer scientists, programmers and even hackers to ensure its security. Unlike other wireless protocols, Airea is a private system – it’s proprietary to SRAM, so no tech information is outside of the company.

The rear derailleur has an ANT+ radio so it can talk to head units. Garmin is expected to have a firmware update to include the SRAM protocol, and we saw a Garmin 520 running gear indication displays.

The eTap group ships with a USB stick. This allows you to download any firmware updates from your computer, which can then upload them to the drivetrain wirelessly. There won’t, according to SRAM, be much need for a firmware update any time soon.

The hoods are slightly slimmer than existing SRAM models, and the carbon levers retain the reach adjustment from standard Red. The large paddles sitting behind the lever feel as familiar as DoubleTap, with much reduced movement yet still with a solid click. 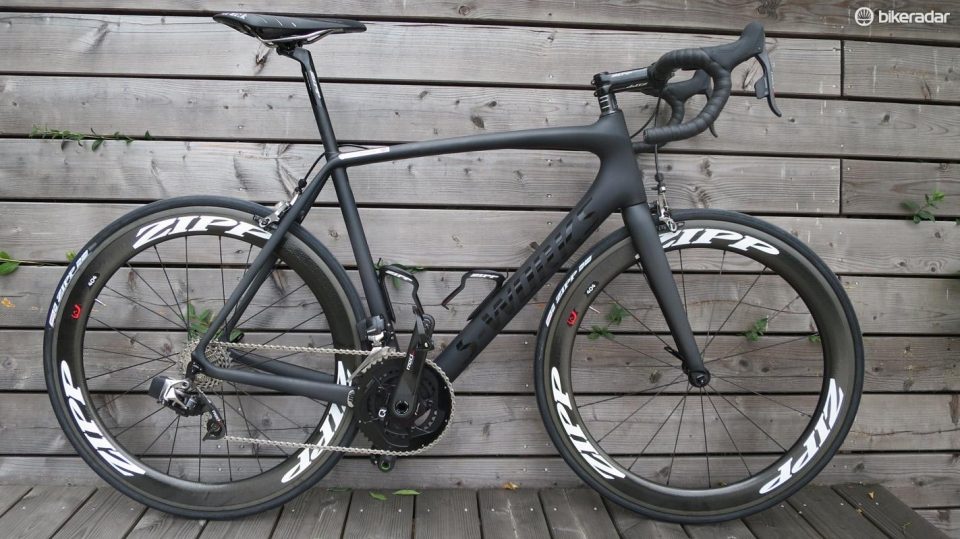 On our test bike the Blip shifters were fitted under the tape on the tops. We really liked this positioning as it allowed you roll up long climbs with a comfortable on-the-tops position, while still being able to shift without taking a hand off of the bars.

Shifting from the levers – in fact from the levers or the Blips – is precise and  smooth. On the downside, it does give the impression of being a little slower than mechanical Red. That’s possibly down to having much less throw on the paddle than the swing of a DoubleTap shifter, but you do still get the impression of pressing the button and then the shift happening.

Holding either paddle in allows the system to shift the whole way across the block. This has been designed to sync with the ‘gates’ in the Red cassette, so each individual sprocket is engaged as it shifts across as opposed to the albeit faster chattering up and down you get from rival systems. 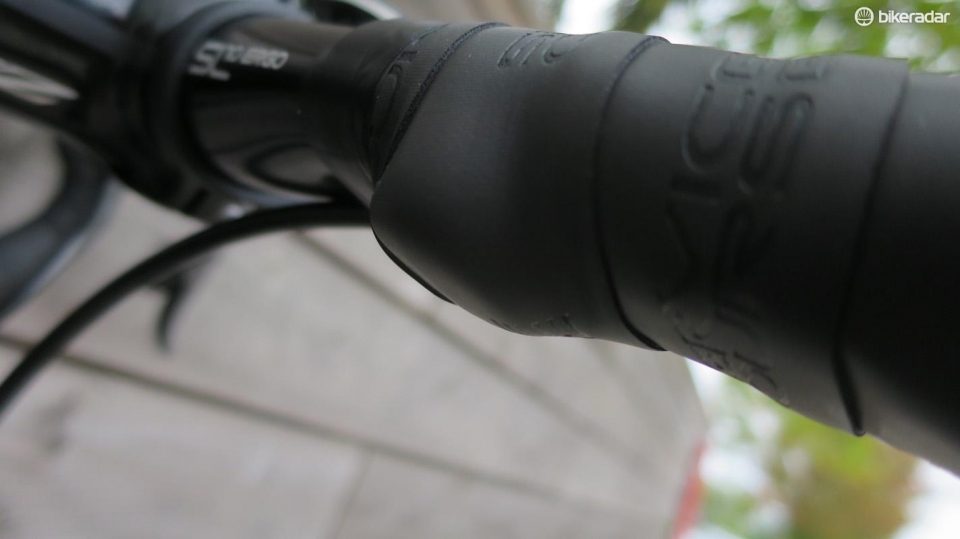 Our test bike had the blips mounted under the bar tape on the underside of the bar tops, and worked perfectly throughout our rides

Over two 3hr-plus rides, the eTap drivetrain was absolutely flawless, never missing a shift and shrugging off any attempts to upset the system, such as shifting under pressure on steep, out-of-the saddle climbs.

Like Shimano’s Di2, the eTap front derailleur overshifts slightly, moving outboard of the chainrings before moving back. This, SRAM claims, delivers a much smoother shift than a standard setup.

SRAM worked on tweaking its 52/36 chainrings to optimize them for electronic shifting, but then found the new profiles actually worked better – and so has now rolled them out across the whole Red range. Strangely the 50/34 and 53/39 rings didn’t need changing.

Development time and costs for eTap were among the biggest SRAM has ever undertaken, the company claimed,  with than 45 years of man hours and 1 million km of testing.

Scott McLaughlin, SRAM’s global engineering and design lead, took charge of taking the prototypes into mass production. This included ergonomic development, including the feel of hoods and levers – removing their mechanical foundation enabled a free reign on lever and hood shape. The three-finger width length of the hood is retained, but with a slightly reduced diameter. The hood cover is a closer, sleeker fit and the full-carbon lever retains its reach adjustment, plus of course its final manufacturing processes.

Before anything was signed off, SRAM ran punishing lab testing in several of its facilities as well as independent test labs.

Publishing the full detail of this would take this article to gigantic length; suffice to say it included:

– Vibration testing to automotive standards, simulating a decade of vibration from road use

– Battery-retention security – tested mechanically, meaning that in the event of a crash you won’t lose your battery or reinstall it incorrectly

– Dust and water ingress, incorporating some of the electronics industry’s most stringent trials, and pressure-washing components from every conceivable angle for 30 minutes at a time

– A thermal endurance test within a climate chamber purpose-built to recreate extreme temperatures and humidity, with the system running weeks at a time with constant shifting

– Static discharge testing to check the protection of the electronic parts

SRAM’s engineers optimized the shift speed, consistency and accuracy, with precision prioritized over out-and-out speed. A chain that engages each sprocket will work at its best for far longer, while one that’s being smashed across teeth is damaging to both chain and cassette, McLaughlin said, so SRAM looked to eliminate these ‘bad’ shifts.

Manufacturing was perhaps SRAM’s biggest challenge. All electronic manufacturing needed to be done in house, with the firm desperate to control quality and ensure security of its design property. Because SRAM’s speciality is mechanical engineering, it had to invest hugely in electronic production, including facilities, tools, machines and people.

For the past two years, SRAM has had 100 systems in the field. At first, the prototypes had fake wires and a fake ‘brain box’ to conceal their wireless nature.

“On pro riders’ bikes, the fake wires took longer to install than the group itself,” SRAM’s director of road sports marketing Alex Wassmann said. “We tried not to let on that the system was wireless at all.

“Wireless [also] has to be robust: how will it perform riding though the middle of Paris, next to TV motorbikes in the peloton – a really dirty area for electronic transmissions?” Wassmann said. 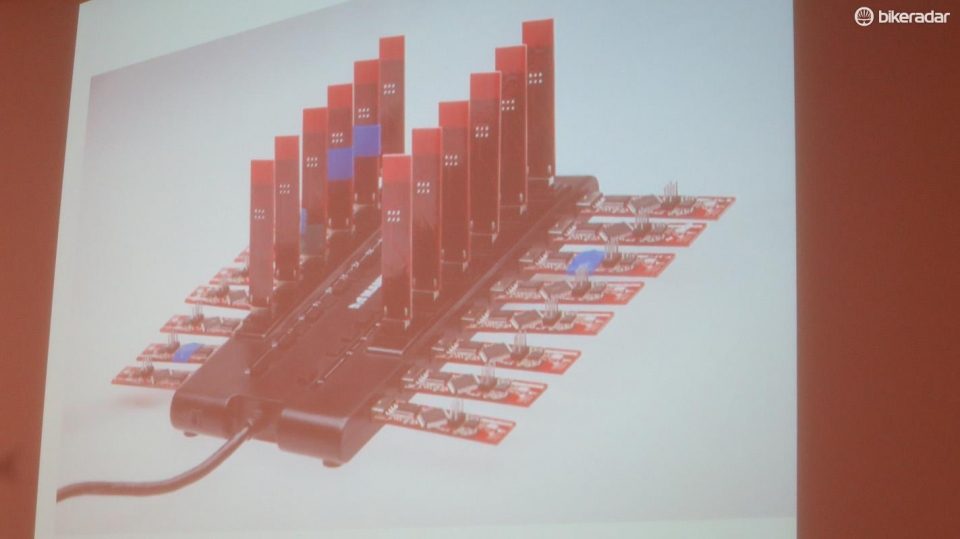 In spring 2014, the Bissell Development Team became the test squad for that particular time of year used the group at the 2014 Amgen Tour of California.

“We had lots of wireless testing in the race – our neutral service cars were set up to monitor wireless interference during the race and it was flawless,” said Wassman.

Into and through the summer of 2014, the wireless system continued to be tested in training and race situations. Axeon (formerly Bissell) continued trials, and WorldTour team AG2R-La Mondiale came onboard in 2015 with Focus bikes, putting the eTap system through the wringer of the Tour de France.

“By the time we got to the Tour, we felt we’d covered everything and we were ready,” Wassmann said. “Getting a stage win on eTap, after the weather, cobbles and hard usage… the systems came through.”