This feature first appeared on our sister website www.bikeradar.com

The Liv Avow Advanced Pro is one of the few tri bikes on the market with a women’s specific geometry, featuring a lightweight, advanced-grade carbon frame with a feature-packed spec list.

The best road bikes for triathlon

Is a road bike or triathlon bike best for a hilly Ironman?

The Avow Advanced Pro is clearly a bike built for speed. Its aerodynamic frame, aero wheel and tyre system, and carbon finishing kit including keep things light weight and race-ready.

Interestingly, Liv claims that the Avow also offers comfort — a term not generally associated with triathlon bikes. Sister-brand to Giant Bicycles, Liv prides itself on producing bikes with a geometry designed around the female body, which is in its opinion physically different enough to warrant this approach for increased performance and comfort. 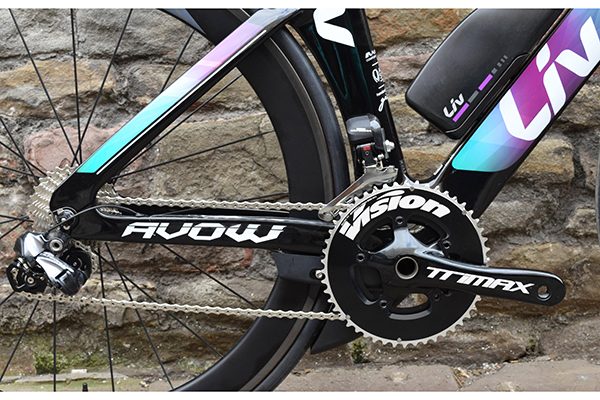 With more and more women racing, brands are finally realising that the serious triathlete and cyclist needs a serious bike with a high-end performance spec to match.

Liv is riding high on this tide, producing bikes to the highest end of the range and the Avow Advanced Pro 1 sits second from the top, and is based around a premium advanced-grade carbon frame and fork with hybrid steerer.

Carbon features strongly throughout, from the carbon seatpost to the handlebars. The drivetrain is a combination of Shimano Di2 2×11 with an Ultegra 11-28t cassette and FSA Vision TRIMAX crankset with 34/50t chainrings. The eagle-eyed among you will notice that the aero-bars on our model feature DuraAce controls.

The Giant SLR 1 Aero wheelsystem is a combined package of wheels with 55mm carbon rims and alloy hubs, and has a reported weight of 1,700g per wheel system, according to Giant.

The system is compatible with clincher and tubeless systems, and is completed by a set of Giant Gavia SL tubeless wheels with a width of 25mm.

The Avow also features Giant’s SpeedControl SL brake system, which tucks the brake calipers in behind the forks and low near the bottom bracket at the back.

Hydration and nutrition on the go

The Avow certainly packs in the features. As well as a top-tube mounted snack box and integrated tool storage, there is also an on-board hydration system on the cockpit with a drinking tube that allows you to take on water without shifting position or reaching for water bottles.

The bike also comes with a water bottle, which features an aerodynamic design — as do the snack box and liquid reservoir at the cockpit.

If you want to get your hands on this fine machine you’ll need to fork out £4,899 / $5,450 / AU$6,499. There are both pricier models available as well as the slightly less expensive Avow Advanced, too.

The Liv Avow Advanced Pro is available in sizes XS to M, which according to the Liv size guide covers riders from 155cm to 180cm.

If you’re based in the UK you can purchase the Avow Advanced Pro direct from Liv via its website and from Liv dealers nationwide. To purchase in the US and Australia it’s available via Liv dealers.

The Liv website handily has a tool that lists retailers with available stock.