New British bike brands seem to have been springing up consistently over the last few years, but one of the newest is Sublime. Established in Bristol in 2013, Sublime’s aim is to sell carbon road and tri frames specced and sprayed up to its customers’ wishes at knock-down prices.

It’s an aim Sublime shares with a lot of other brands, not just in Britain but all over the globe. And it’s possible for two reasons: one, like those other brands, Sublime doesn’t actually make its frames; and two, Sublime sells directly to customers through its website.

Selling direct means the profit margin mark-ups for retailers and distributors don’t have to be factored into the prices of Sublime’s bikes. But Sublime isn’t unusual in cutting out the middle-men; Planet X and Canyon are just two of companies that have been doing it for years. And neither is Sublime unusual for being a bike brand that doesn’t make its own frames. Plenty of brands, both big and small, use manufacturers – typically based in the Far East – to make their carbon frames. Mainly because it’s cheaper than making them themselves but also because so many carbon frames are made in Taiwan and China that they have a positive wealth of expertise.

So much experience, in fact, that some of the manufacturers even have their own frame designs that bike brands can choose to have built on their behalf. They’re known as ‘open-mould’ designs, since the frames’ moulds are open to be used by anyone who’s willing to pay for them, rather than being exclusive to a particular brand. Think of it like a bike company buying an ‘off-the-peg’ frame design, rather than coming up with one of its own.

Going down the open-mould route saves a company like Sublime even more money (since it doesn’t have to employ someone to design the frame), which results in a cheaper bike for the customer. And it’s for these reasons that Sublime have done just that with the two bikes that currently make up their range – the C Six Aero road bike and the CA1 tri/TT bike…

The main criticism fired at bikes like the CA1 is that they bear an uncanny resemblance to all those from other brands that use the same mould. And it’s a fair point. But if you opt instead for a bike from a bigger brand that uses a proprietary design, you’re going to see the exact same model, with the exact same paint job, under a lot of other athletes anyway.

But whatever name is plastered along the CA1’s down tube, the main questions are: how much bike do you get for your money, and how well does it perform? Because ultimately, if the bike saves you time, it shouldn’t matter whether it has the big brand logos or not.

The CA1 frameset has all the features you’d expect to find on a triathlon bike: bladed forks; a short head tube to keep the front end low; a profiled down tube with a slight cowl for the fork crown at one end and a beefy junction with the bottom bracket at the other; and a cutaway seat tube that shrouds the rear wheel. Its top tube is flattened with fluted sides that splay out and blend into a small nose on the head tube. The nose may help to smooth airflow around the junction with the down tube but it also gives the CA1 a look that’s not dissimilar to the front ends you find on Pinarello’s road bikes. 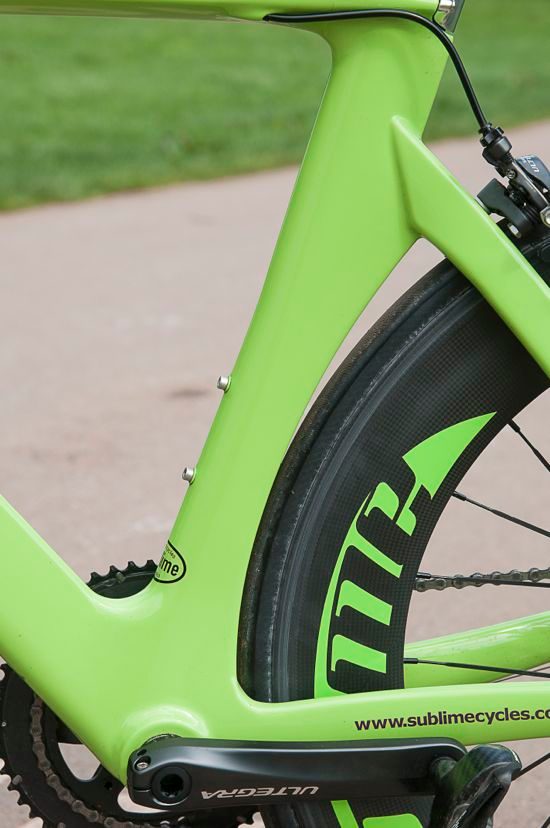 Aside from the tube profiles, the most obvious aero feature is the seat tube’s cutaway. It sends the right visual signals but quite how much benefit it actually offers is debatable, as it doesn’t match the curve of the rear wheel. The cutaway’s lower half does a good job of keeping close, but the further up you go the more it pulls away from the wheel. By the time you reach the seatstays there’s enough clearance between the wheel and the frame to almost slide your hand through, which can’t be helping the airflow much.

The frame rolls on Sublime’s own deep-section, full-carbon clinchers (50mm at the front and 80mm at the back). No fancy shaping here just wide, flat sides that cut through calm air well enough to hold speed but will likely catch in sidewinds. Nevertheless, they have a noticeable advantage over the standard shallow rims you’d generally find specced on shop bought bikes at this price. Plus, they score a few style points for being smartly matched to the frame colour. 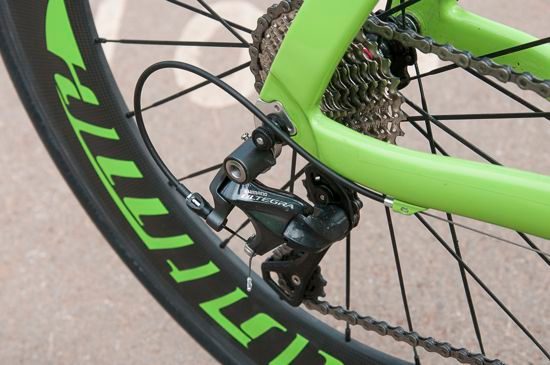 You can spec your preferred component options when ordering a Sublime, but the test model uses Shimano’s 11-speed Ultegra groupset to take care of shifting and stopping duties. All cables are routed internally and the cockpit is furnished with Sublime’s own adjustable aerobar.

Topping off the whole package is a Rido LT saddle that has curvier flanks than a typical tri perch. It puts you a little higher than you might be with a flat saddle but is fantastically comfortable, even when you’re pitched forward on the aerobars for long periods. 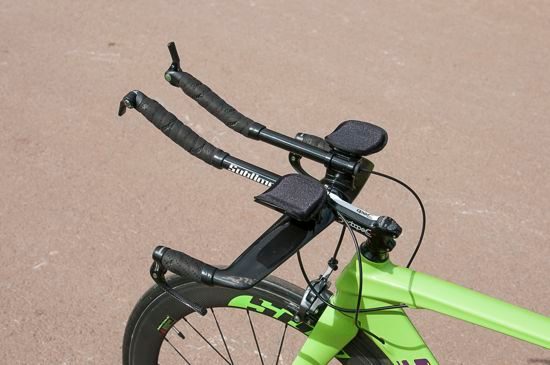 The CA1 tipped the 220 scales at 8.5kg, which may not make it a featherweight but certainly isn’t the sort of bulk that should hold it back. And while it may not have the most sophisticated aero shaping, its build has enough concessions to cutting through the air that the weight shouldn’t be an issue.

Having said that, our first impression of the Sublime was distinctly mixed. It wasn’t an especially windy day, and the few breezes that were blowing over the 40-mile test route were crosswinds rather than headwinds, so the issue had to be with the bike rather than the conditions. Back to base to give it a thorough check and we discovered that we’d somehow managed to knock the rear wheel out of true and as a result the rim was rubbing against the thick rubber of the brand new brake blocks. That issue was solved easily enough, and after a few minor adjustments to fine tune the saddle position it was ready for a second outing and a chance to redeem itself. 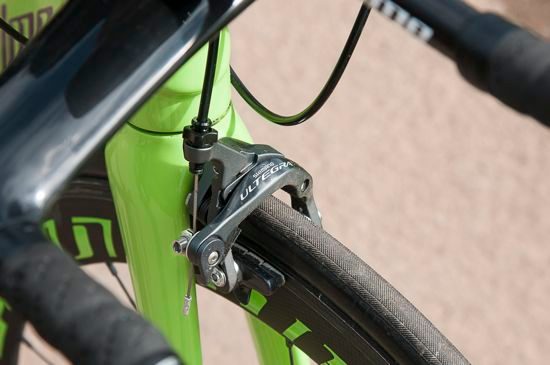 Back out on the road again and the CA1 acted like a bike with a new lease of life. In fact, if we’re honest, we were pleasantly surprised. Our 40-mile test route gave it the opportunity to really show its qualities, and it had an impressive appetite for speed. Plus it clocked a full 10mins quicker with the problem corrected. It didn’t spring forward with every pedal stroke but it absorbed all the effort that was thrown at it and turned it smoothly into speed. It may have lacked the aggressive pounce of lighter, sprightlier and more expensive bikes, but it built pace in a way that felt like you’d been caught in a tide. Even open-mould aero is almost certainly more aero than a road bike with clip ons, and the adjustability of a tri bike is vastly superior.

The CA1 held that pace easily too and only allowed it to drop when braking, climbing or hitting that unavoidable nemsis of speed: the headwind. For the most part, the CA1 lived up to its billing. It was sublime – as long as it was ridden in a straight line. But when it came to cornering, the CA1 lacked a little precision.

Granted, a tri bike that handles as nimbly as a road bike is a rarity (mostly because that level of agility is unnecessary in a machine intended for riding solo down long stretches of near-straight road). But nevertheless, a tri bike needs to handle well enough to feel surefooted through the turns and corners it does have to contend with. And you have to feel confident enough going into those corners to not scrub off all your speed and then waste valuable energy sprinting out the other side. And with that in mind, the steering on the CA1 was a little too vague to inspire total confidence.

The handling wasn’t bad, it was just a little woollier that we needed it to be. Hitting and holding lines through turns wasn’t impossible, just a bit more difficult than you might be used to. We found our usual smooth curving lines through corners occasionally took on a more stilted, hexagonal profile. After a while, in a long-course race, this extra bit of attention needed in every turn could begin to become a little mentally taxing. And the deep, flat sides of the front wheel didn’t help matters as they got caught in crosswinds, which made quick course corrections a bit of a handful, and things up front felt a bit too twitchy. 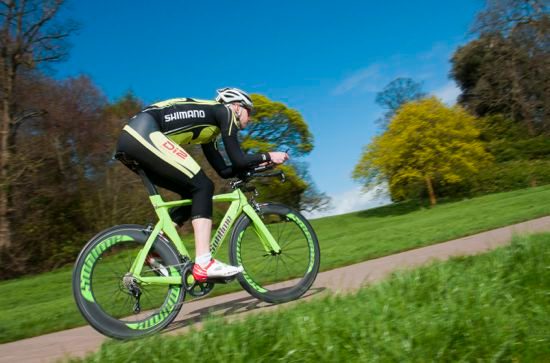 It was most obvious when riding through tighter corners at slower speeds, which sometimes felt as though we were riding through a rut in deep sand. But the CA1 also gave similar sensations, although slightly more muted, at high speeds. Rather than being able to flick it around potholes when we were barrelling along on the aerobars, we had to veer it on to a different course from a long way out. To put it another way, the CA1 has a tendency to be a little less than precise, which could catch you out if you’re not attentive enough.

It wasn’t unruly or uncontrollable but getting the CA1 to go exactly where we wanted it to did require a bit more care than on more surefooted bikes. It’s a capable performer but it doesn’t quite have the handling to match its speed. If it did, it would be a fantastic overall package. As it is, the ride quality is very good, but it’s definitely better on the straights than it is through the bends.

Great in a straight line, lacks a little precision through the bends.

Full-carbon frame, aero wheels and a full Ultegra group set – there’s room for improvement but not much, and not without spending a fortune.

A lot of bike for the price, compared to many of its big-brand competitors.

Finding and holding a comfortable position is easy.