As elite endorsements go, it doesn’t get much better than Kona winner Sebastian Kienle aboard the Scott Plasma Team Issue. The German rode it to a furiously fast 4:20:46 bike split on the Hawaiian lava fields last year. Now we’ve got our hands on the Plasma, how does it fare on British roads and without an IM world champ atop its saddle?

Initially, you feel slightly tipped forward on the extensions, and the Plasma-specific Profile bar’s wing shape continues through the stem clamp. This isn’t adjustable, which does take some getting used to. The mechanical SRAM Red is a different beast to Shimano’s top-end Di2 groupset. 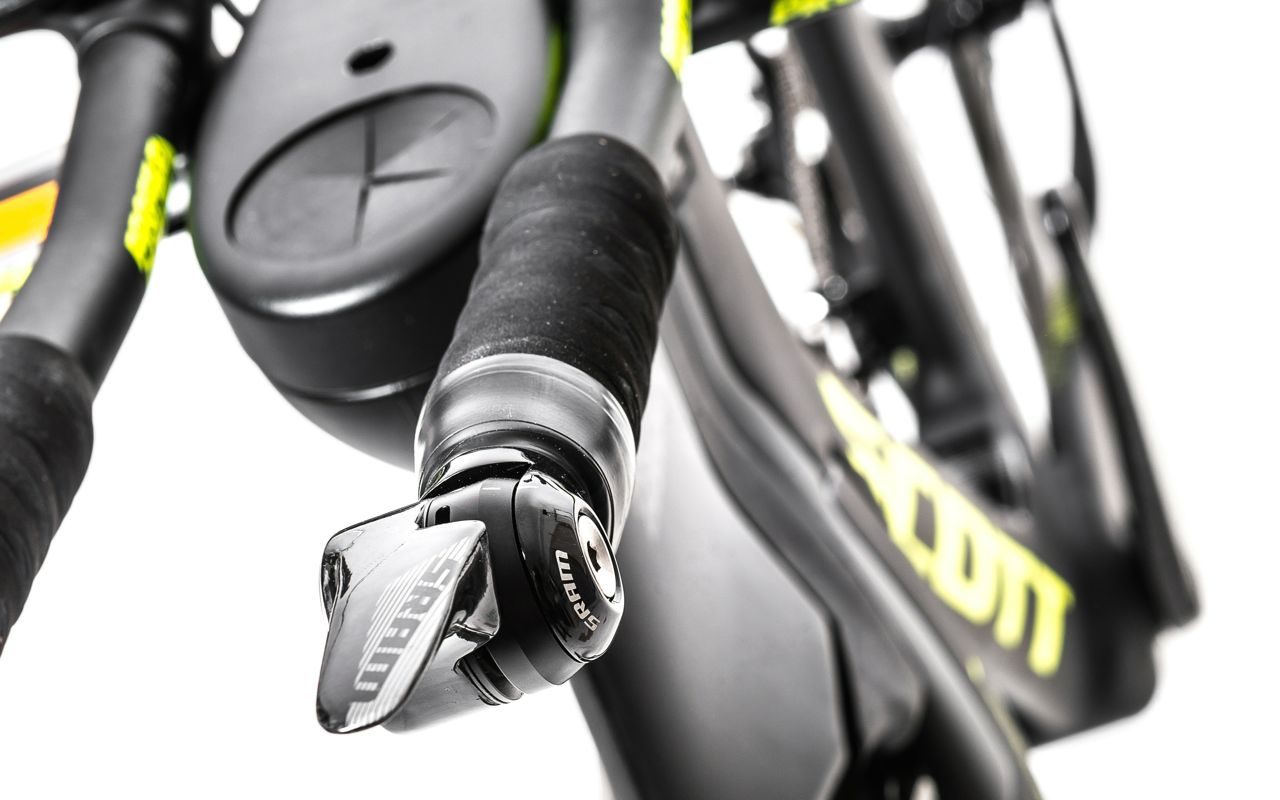 Gear shifting is controlled solely from the bar-end levers, which takes some getting used to if you’re accustomed to Di2, but it’s neat and easy to use

Gear changes are controlled solely from SRAM’s R2C (Return to Centre) bar-end levers, which work sequentially. Each lever can be clicked to shift in the appropriate direction and instantly returns to the centre, making it easy to use every time. With both brake cables routed internally only the top of the gear cables are at all visible. 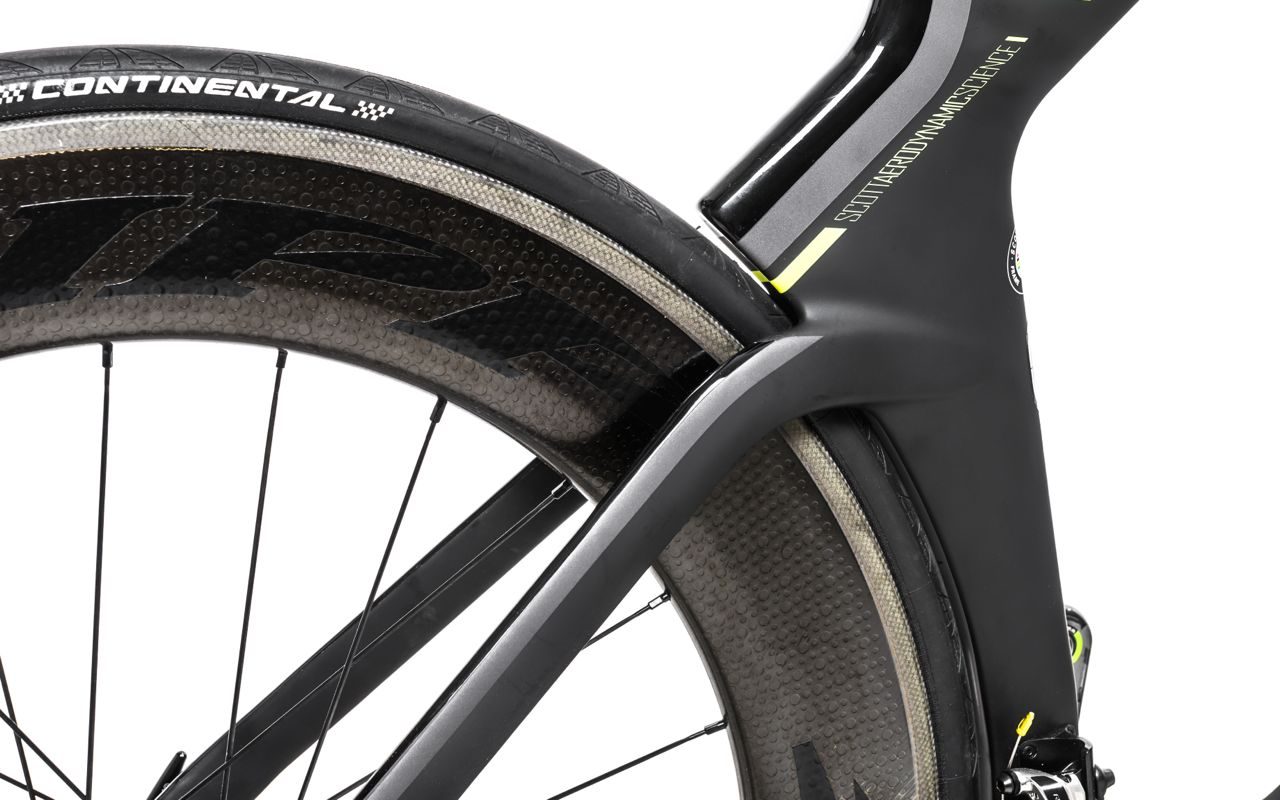 The Zipp 808 back and 404 front wheels make for a “fantastically fast, aural quality”

The SRAM Powerdome cassette makes a unique sound when changing gears, and is equally precise. Add in the sound of Zipp’s 808 rear and 404 front Firecrest carbon clincher wheels, and the Plasma has a fantastically fast, aural quality.

A major tri-friendly (if UCI-busting) innovation is the Fuel Cell hydration and storage system. The integrated nose cone can be refilled on the go through a large port on top, behind which a simple round straw pops up. The rubberised top tube fuel box is sculpted to the contours of the cockpit and is designed, along with the bottle, to meet the storage and nutrition needs of long-distance triathletes.

Acceleration is incredibly urgent and – with the low weight, wheel stiffness and efficiency – the Plasma really maximises your wattage. Spending the time refining your position really pays off when settling into an aero tuck, and the Plasma is hugely adjustable.

The supplied stem swoops upwards in one piece, but it’s possible to fit one that flows forwards in line with the top tube for an even lower position – otherwise just go for a smaller frame, as the Plasma’s high stance can be deceiving if judged solely by frame size.

The bulbous bottom bracket shell sits beneath a massively boxy transition between the down tube and seat tube, with the unique chainstays twisting their way rearwards and encapsulating the completely hidden rear brake. 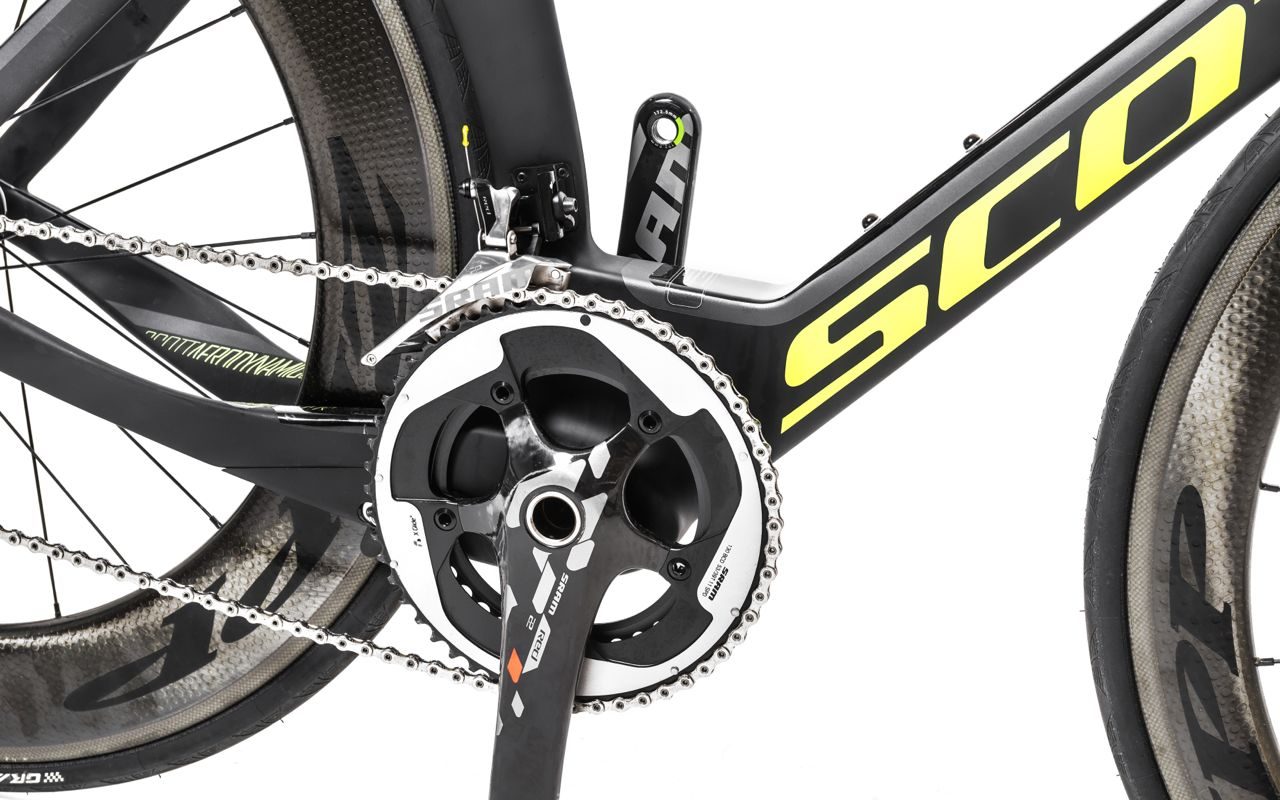 The front brake lives in a recess in the fork crown, with an airflow-smoothing cover completing the aero lines from fork legs to stem. The fork’s turning radius is less than the integrated competition, and the drag-saving credentials are superb.

The end result is an incredibly solid and stable bike, and really as capable in the corners as most roadies (the only limiting factors being adapting to its aggressive position). You want a bike that’s there for you when you’re pushing for a fast bike split – and when the red mist descends, you’ll be hard-pushed to find a better bike than the Plasma 5.

Verdict: Yes the price is sky-high… but there are few faster and more exhilarating bikes than the Plasma 5, 91%