Saturday 7 July 1990 was a monumental day for UK triathlon. The venue was the Cotswold Water Park in Wiltshire. The race was the 220 Marathon Triathlon, the first-ever event in UK triathlon history to be run over the official Ironman distances. The entry fee was £2.20 and 220 athletes signed-up for the 226km challenge. Scan the results now and many of the athletes would help shape the sport as we know it in Britain.

Fifth-place finisher Jack Maitland would become the Brownlee brothers’ coach, first female Sarah Springman the President of British Triathlon, coaches and authors Joe Beer and Mark Kleanthous would guide countless people
to their own triathlon goals, and John Lunt would organise the 2012 Olympic Games triathlon events. Also on that finishers’ list in seventh place was one Dave Loughran.

At the time, Loughran had little idea of how the various finishers of the 220 Marathon Triathlon would come to alter British triathlon. “When you’re young you live day to day week to week, there was never any long-term thought to how triathlon might evolve as a sport, just a focus on the next weekend. I was young, had found something I loved doing and had no real cares in the world. It was a blast every weekend.”

But alter British triathlon Loughran would, introducing Powerbar to the UK and then launching Planet X bikes. The Rotherham-based brand would pioneer the move of direct selling to the consumer before releasing the hugely popular Stealth triathlon bike in 2009. The original Exocet tri bike would follow in 2011 and would also become a familiar sight on the UK tri courses, with the sequel coming just a year later.

Much has changed in the tri bike market in the intervening four years. In the UK, Boardman have become a major player, while Planet X’s fellow direct-to-market sellers Canyon have become a dominant Ironman world champs-winning force. So how does the latest release from Planet X compare to its predecessors and the established offerings on the market? Will the Exo3 compete in speed as well as spec? Let’s find out…

Up-to-date shapes, a SRAM Red eTap wireless electronic groupset, hidden V-brakes, and a disc and tri-spoke included – no wonder the four grand Exo3 is already causing a stir. It’s claimed to be every bit as fast as it looks and on our first test ride we blasted out 61.4 miles in 2:31hrs, an average of 24.4mph from 268W. Yep, it’s quick.

So how is this even possible? It’s actually simple – Planet X buy in the frameset and wheels from a Far Eastern supplier. The difference from other brands using out-sourced designs is that Planet X were involved in the bike’s development and tested it rigorously until it met their targets.

We spoke with Planet-X at length about the Exo3. They were cagey about the bike’s provenance but bullish about the development work that went into it. “The Exo3 is very much our own frame,” says James Vickers, the brand’s head of marketing. “The design team spent a great deal of time refining the concept with our suppliers.

“We took one of the original prototypes to the National Wind Tunnel Facility in Glasgow where we were encouraged by the early results. The bike underwent further development so releasing this data wouldn’t be an accurate representation of the current performance. We will be returning to the tunnel [to test the finished] bike and intend to release this data.”

Making the Exo3 UCI-legal for professional time trialling was a pre-requisite for Planet X to make the bike as accessible to consumers as possible. So it inevitably looks familiar; long established rules give rise to engineering consensus. The brakes are neatly concealed behind a cover at the front and behind the bottom bracket at the rear, and feature stronger springs to keep them off the rims. Vickers told us, “We were aware of the issues other manufacturers have had with integrated brakes and this area was a particular focus for our development. We did a lot of work with our manufacturers on the brakes, the mounting system and the covers to make sure they actually worked as brakes should and felt reliable. (Former road pro rider) Mark Lovatt is on the design team at Planet X and he test rode each prototype. His bluntness and honesty made the project much better.”

SRAM’s new eTap groupset features wireless electronic shifting and small buttons (Blips) that can be mounted wherever you like instead of Di2’s fixed shifter units that are vulnerable to crash damage. The derailleur batteries are interchangeable, charge in 40mins and last 50-60hrs. You press a left button to shift up the cassette, a right one to shift down it, both together to swap chainrings. Mis-shifting is impossible, it’s instantly intuitive and beautifully logical. Spock would ride eTap. The buttons do require a firm push, so it’s important to have them well placed. Given the choice, we’d put them on the ends of the extensions pointing forwards.

Only the shifting is by SRAM. The crankset is Vision’s top-of-the-range Metron TT and it’s a real highlight – both technically and aesthetically. The brakes combine aero TRP calipers with Planet X levers and, although they lack some linearity of response, they provide huge power. Best of all, they’re stiffly sprung in order to snap back from the rims and prevent annoying rub. We cheered out loud when we spotted that. Every other brand, please take note.

The bar is a Selcof Ultra Chrono TT. Spacers can be added in the usual way and the arm pad mounts can be switched to offer lots of width range. So far this is the only extension option and we found it rather short and shallow but more shapes are coming soon. It’s a strong bar when you’re out of the saddle and pulling on it.

These wheels do the Exo3 all sorts of favours. Most apparently, but least importantly, they look bad-ass. They underline this bike’s value and being carbon tubs they also help to keep the weight down to 9.1kg, which is very decent for a race-ready build. And they really boost the ride, responding quickly thanks to low mass and excellent stiffness and feeling properly fast.

Both wheels are also available as clinchers and the tri-spoke front is stable enough to use on breezy days, though it will move in the wind and the wake of trucks. This bike came with ace Michelin Service Course 24mm tubs.

Planet X’s Exocet saddle retails for only £40 and looks like cost-cutting, but it’s one of the most comfortable tri seats we’ve ridden thanks to a great shaped nose with well-judged padding and titanium rails. The seat clamp can slide along the top of the seatpost, enabling an extreme forward position that should help save your glutes for the triathlon run.

On top of all this, the frame itself is more compliant than most and the arm pads are plush. It all adds up to a comfortable bike that we’d have no hesitation in taking to long-course events. You’ll need to add aftermarket storage and hydration kits, though, as the Exo3 only has the basic bottle bosses.

Carbon fibre engineering – that is, getting the best from the materials which, in this case, is high-ish end Toray T800 – is an area in which Far Eastern sourced bikes such as this one have really caught up to the top brands. Where wobbly handling and limp power transfer used to be the norm, the Exo3 is precise, confidence inspiring and efficient. It makes you want to ride hard and it rewards you for doing so. 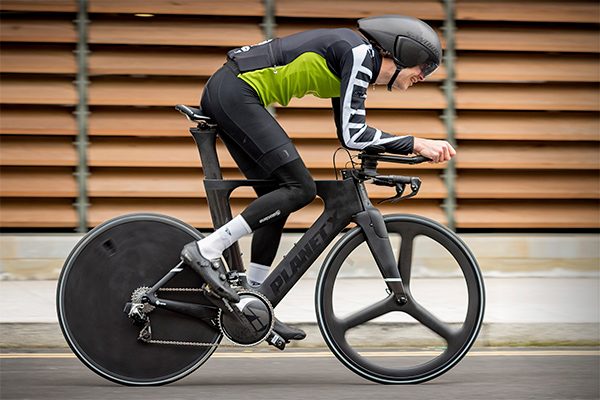 So far, so good, but it’s aero that matters most and this is where the fat R&D budgets of big brands really tell. Did Planet-X do enough homework? Our long, fast road ride suggested that the Exo3 is in the right ballpark. Then, as usual, we pitched it against our long-term test, Orbea’s Ordu Ltd M20i, a bike we know to be fast, in a timed test at a set power.

This is a benchmarking exercise not a direct head-to-head test as the Orbea is more expensive. We used the Planet-X wheels on both bikes and rode at 320W in the same clothing and position, doing both runs within an hour in the same conditions. Because of roadworks on our usual course, this test is over 10km.

The Orbea completed the test in 14:28mins, the Exo3 in 14:43mins. That would be a full minute in 40km but for a more affordable bike that hasn’t benefitted from such extensive R&D, that’s pretty good. When we ran a similar test on a Sensa Dura Integra recently it lost 2.9secs/km to the Orbea; the Exo3 only gave up 1.5secs/km.

Part of the conclusion is familiar: if you want the fastest bike invest in one from a brand that does its own obsessive aero R&D. Planet X are closing the gap in performance but also in price. This Exo3 costs the same as a Canyon Speedmax CF 9.0 Di2 (the same frame scored 95% in issue 328), a ballistic tri-focused bike, developed in house and with integrated storage. So as good as the Exo3 is, it misses taking top honours in the £4k cat.

Verdict: Incredible value spec and quick, but just slightly behind the top boys for speed 87% 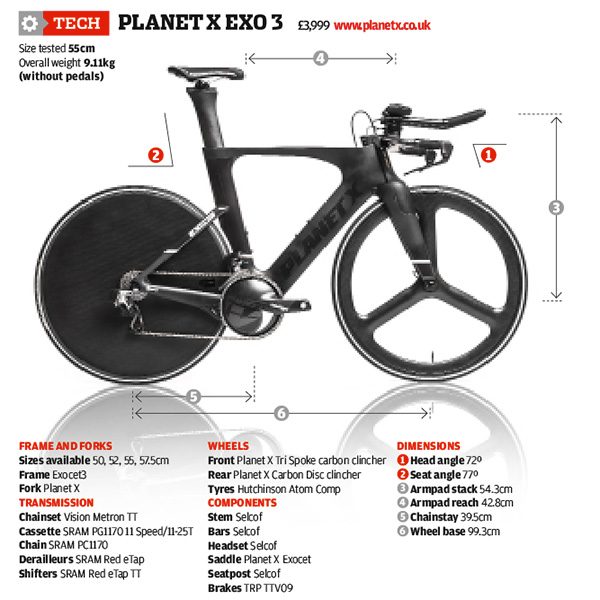